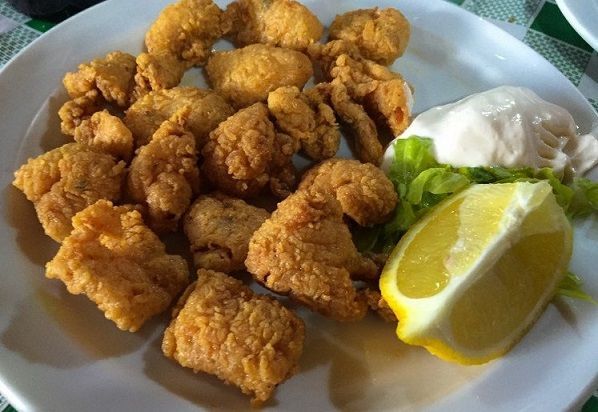 If you ask somebody about their reasons to love Spain, it’s more than likely that food is going to be on top of their list. Spanish cuisine is well known for being varied, rich and healthy. Each region has its own specialties, so the list of dishes you can try is virtually endless!

But this time we are focusing on Seville, the capital of Andalusia and also one of the most touristic cities in the whole country due to its overwhelming beauty and monumental offer.

If you have decided to visit this lovely town, congratulations, you surely won’t regret it! And if you are a food lover, congratulations again, your appetite will be more than satisfied!

Here’s our list of what to eat in Seville. Meet the local cuisine:

This traditional combination of spinach and chickpeas recipe has roots in Seville’s Moorish and Jewish history. It is very popular in today’s tapas bars and also one of the few vegan-friendly dishes on this list. Definitely a must-try!

Another really popular dish in Seville, commonly served as a tapa too. Its origins are unclear, but this whiskey, garlic, and olive sauce has become one of the city’s most famous. Perfect pairing for grilled pork loin, tasty and delicious.

This local specialty consists of strips of desalted codfish, marinated in a mixture of lemon juice and Spanish sweet pimentón (paprika), then either coated first in flour then in egg, or in a frying batter, deep-fried in olive oil and served with a strip of roasted red pepper around them. There are two theories about the origin of its peculiar name: some think it relates to the color of the soldier uniforms at the time of the battle of Pavia in 1525, while others defend it relates to the color of the Spanish hussar uniforms during the 19th Century.

Pescaito frito, or fried fish, is, in general, one of the most traditional tapas in Seville as in many other Andalusian cities. However, the local specialty is cazón, a tender white fish which is known in English as dogfish or sand shark covered in a light batter and fried. It’s very tasty and perfect to be enjoyed with a cold beer or a glass of white wine.

If you want to try them, bear in mind that the caracoles season only lasts two months long, May and June. This dish might sound a bit weirder and less appealing to many, but we definitely recommend to give them a try! They are prepared in a slightly spicy broth and can be picked out of the shells with toothpicks, or, if you are brave, you can just suck them out of the shell, as most locals do.

Temperatures can get extremely high in Seville during summer. In this city, as in other parts of  Andalusia, gazpacho is the perfect mix between food and drink that will help you face the extreme weather.  This cold soup made of raw, blended vegetables is a basic of Seville’s local summer cuisine, though it can be enjoyed throughout the year.

It’s the city’s signature sandwich. If you don’t know what to eat in Seville one of those days when you just want to grab a bite more than enjoy a proper meal, this is a perfect choice. Seared pork loin topped with Serrano ham and grilled green pepper. It’s delicious!  And if you don’t eat pork don’t worry, there’s a chicken version in nearly all restaurants.

Torrijas, similar to Frech toasts, are normally made with stale bread soaked in beaten eggs before and deep fried. They can be covered in sugar syrup, honey or sweetened milk. In Seville, as in other parts of Spain, they are traditionally eaten in pastry shops mainly around Semana Santa (Holy Week). However, many restaurants have realized lately that they make a fantastic dessert all year long, especially topped with ice cream so it’s quite frequent to find them among the dessert menu of many restaurants, fancy ones included.