The Great Theatre of Cordoba

Plaza de España in Seville: A walk through our country

What to see in Cordoba – Spain in one day 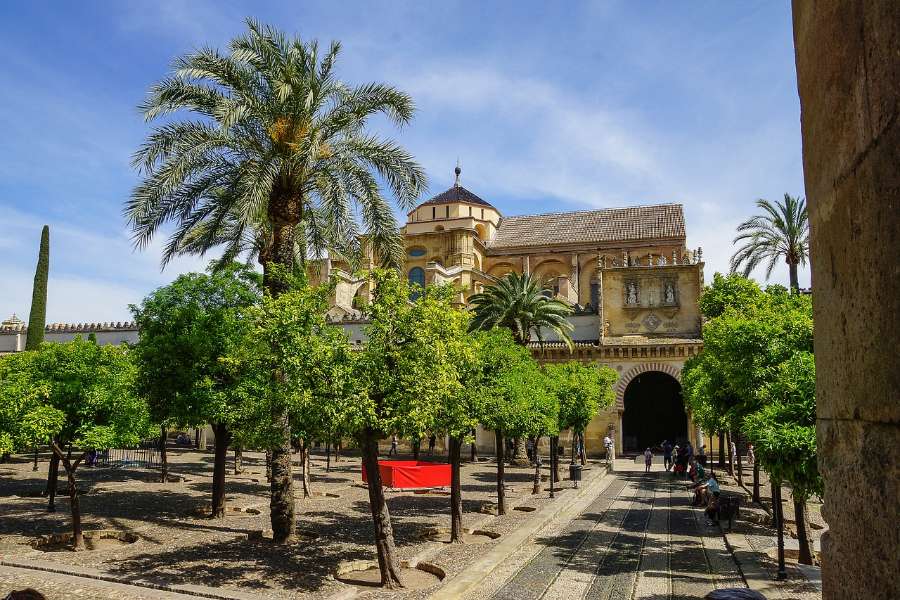 Cordoba is an impressive city that deserves all the time in the world, but if you are on a tight schedule, we are going to give you a list of what to see in Córdoba - Spain in one day.

Don Pepe, close to Las Tendillas square in the city center, is the perfect place to start the day. You can opt for a chocolate con churros - also known as ‘porras’ or ‘jeringos’ in Andalusia - a sweet and traditional Spanish breakfast, or maybe a coffee and a couple of toasted bread slices with olive oil and jamón serrano or zurrapa  (a typically Andalusian spreadable made of lomo, or loin of Iberian pork, fried to a mush in pork fat, flavoured with herbs and spices and coloured with pimentón).

After this energizing breakfast, it’s time to start discovering all the wonders that Cordoba has to offer.

If there’s an iconic monument that you must see in Cordoba, it has to be its impressive Mosque/Cathedral, which is considered one of the most accomplished monuments of Moorish architecture and boasts a special peculiarity: a Christian Cathedral (hence the Mosque-Cathedral name) was built right in the middle of it in the 16th Century. Don’t forget to spend some time strolling around the adjacent Patio de los Naranjos under the shadow of its orange, palm and cypress trees.

Calleja del Pañuelo (The Alley of the Handkerchief) just next to the Mosque, also deserves a visit. This Moorish style alley's most remarkable feature is that at its narrowest point it is no wider than a lady's handkerchief. Right at the end, there is a tiny square - considered by some as the smallest in the world - containing a small fountain and an aromatic orange tree, pretty quaint and charming.

After a few hours of walking through town, it’s time to charge the batteries with a fulfilling lunch. Córdoba has a rich and very varied gastronomic offer, but we recommend trying one of its most typical tabernas. You can’t leave without tasting the local delicacies such as salmorejo, ajoblanco, flamenquín, berenjenas fritas or rabo de toro. Try these and other typical tapas in one of these places and you won’t regret it: Taberna San Cristóbal, Casa Pepe la Judería, Taberna Luque or La Bodega.

Walking along the narrow and charming streets of La Judería (the Jewish Quarter), at the North-East of the Mosque, with no specific destination, can also be a memorable experience. The Sinagoga (Sinagogue), the Zoo Municipal (Municipal Zoo) and the Museo Taurino (Bullfighting Museum) are located there.

Visiting Casa Palacio de Viana and walking around its beautiful twelve patios is a true delight for the eyes and the soul. But if those twelve were not enough, the center of Cordoba is populated with them and they are all worth checking, just make sure not to miss the Callejón de las Flores.

Don’t forget to cross the Puente Romano, a spectacular bridge built by the Romans 20 centuries ago overlooking the Guadalquivir river. It’s a pretty impressive view! Oh, and if you are a Game of Thrones fan you would like to know that this bridge appears on the show as part of the city of Volantis.

At the end of the bridge, you will find the Torre de la Calahorra, a Muslim fortress built to protect the bridge.  It currently hosts the Museo Vivo de al-Andalus, a city History Museum.

In the same area, you can visit the Alcázar de los Reyes Cristianos or the Castle of the Christian Kings, another architectural landmark of the city. In the 14th century, the Catholic king Alfonso XI ordered the construction of this Mudejar -style royal palace among the ruins of a vast Moorish fort. The gardens with lush trees surrounding elegant fountains and ponds are equally spectacular.

If you managed to follow this list there's no doubt you would have made the most of your day in Cordoba!