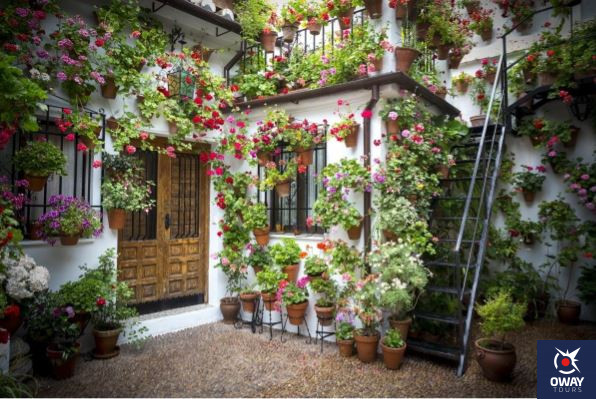 The Courtyards Festival of Cordoba has become one of the hallmarks of the city of Cordoba, thanks to the tradition it keeps alive, and has been awarded the title of World Heritage Site. It is not just about courtyards (or patios) with plants, these patios are part of the culture and history of the city and have benefited from the different cultures and civilisations that have settled in the city over the years. The courtyards of Cordoba thus represent one of the most tangible vestiges of the mark left by the fusion of the three cultures in the city.

This festival is traditionally held in May, a month in which the city is full of tourists eager to visit these enclaves and not only tourists, the people of Cordoba themselves are also part of the public who take the time to visit the courtyards.

Given the flood of tourists arriving year after year, the Cordoba City Council decided a few years ago to propose extraordinary openings to make the most of this tradition. This gives us the opportunity to get to know these little oases of the city in a different atmosphere, as it is in the Christmas season.

If you have in mind a future visit to Cordoba’s patios, OwayTours recommends you to take a look at our Guided Tour through the Patios.

How to spend Christmas in the Patios of Cordoba?

When the courtyards open at Christmas time, they are introduced into the Christmas atmosphere, slightly altering their usual aesthetics to harmonise with the rest of the city and the time of the year. However, they still maintain their essence, blending both traditions in an idyllic fusion. In this attempt to adapt to the festive atmosphere, Christmas decorations are incorporated, and activities are carried out in compliance with the city’s Christmas tradition.

The typical Nativity Scene competition is also moved to the interior of some courtyards where they also arrange their own Nativity Scene in keeping with the aesthetics of the place in which it is located. The neighbours who are in charge of maintaining the courtyards are fully committed to making their courtyards part of the Christmas tradition, and their efforts to make their courtyard the most beautiful one is the reason why these places are constantly being improved and embellished.

If you decide to visit Cordoba at Christmas time, you can also enjoy the performances of the traditional street choirs that come together to bring Christmas inside the courtyards. These choirs sing the well-known Christmas carols that form part of our Christmas culture and manage to awaken the Christmas spirit in even the most resistant people.

There is also a traditional tasting of Christmas sweets and a gastronomic competition in which anyone interested can take part. All these activities show the family face of the city and blend in with local life during the festive season.

Not only is it an activity to enjoy time with the family, it can also become a beautiful romantic evening in the most charming streets and places of the city in a place as intimate and mysterious as Cordoba.

This fusion between the patios and Christmas creates such an ideal atmosphere in which locals and tourists meet, turning a visit to Cordoba into a complete experience. A walk with this charm will not leave anyone indifferent, so it will always be a good choice.

The visit can be rounded off with a walk around the most commemorative monuments of the city with one of the guides who are specialised in Cordoba’s monuments. OwayTours offers you the opportunity to take a guided tour through Monumental Cordoba. 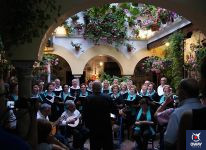 Visiting hours will be from 6 p.m. to 10 p.m. The patios that will join this extraordinary opening have not yet been confirmed, but as in previous years there will be different routes that group together those patios located in the same district.

Entrance to the courtyards is completely free and open. In any case, the capacity will be controlled so that there are no crowds, and the visit can be enjoyed at ease. 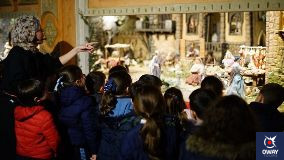 As has been the case in previous years, different routes are established to visit the various courtyards, each one offering a variety of activities. Around 45 courtyards usually take part in this extraordinary opening, and they are grouped into routes to make the visit more convenient and comfortable, thus optimising time by being able to visit in one afternoon those courtyards that are located in the same area.

At weekends, a special route will be set up to take in the most emblematic courtyards of the city. Some of the routes will have choirs that will perform in the streets where the different patios are located, making the atmosphere even more pleasant and festive.

Are you going to resist the experience that Cordoba offers you this Christmas with a touch of Cordoban May?

If this wasn’t enough for you, OwayTours offers a variety of tours in Cordoba for you to enjoy you visit as much as possible. 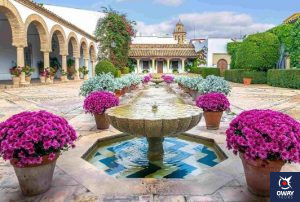