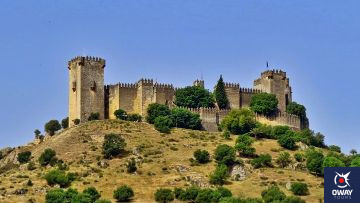 Only 24 kilometres away from the capital of Cordoba lies the municipality of Almodovar del Rio, where remains one of the castles chosen as a setting for the world-wide known HBO series “Game of Thrones”. Along with countries such as Northern Ireland, Croatia, Iceland and Morocco, the Spanish territory has been one of the places selected by the production team to give life to numerous locations throughout its last three seasons.

To this day and with the series already completed at a total of eight seasons, Cordoba has offered two monuments for the filming of Game of Thrones: the Roman Bridge which connects the historic centre with the south of the city of Cordoba, and that represents in fiction the Long Bridge of Volantis; and the Castle of Almodovar, which appears as Highgarden (house of the Tyrell) and in some scenes as Casterly Rock, that belongs to the Lannister dynasty. In this article we will review all the scenes in which this monument appears.

The arrival of the Lannister army at Highgarden. 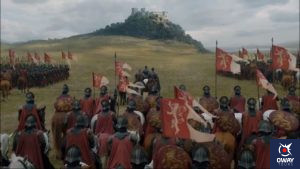 The castle appears for the first time in the third chapter of the seventh season with the arrival of Jaime Lannister to Highgarden. In this scene, the actor Nikolaj Coster-Waldau is filmed on the outskirts of the castle, heading east and accompanied by his army. Despite its distance from the camera in the shot, the structure of Almodovar’s Castle can be appreciated. 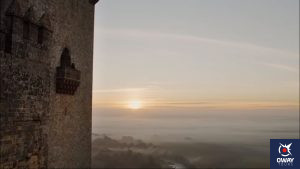 A few seconds later appears on scene Olenna Tyrell’s balcony, from which she can see the arrival of the enemy troops in the distance. This balcony is located in the Tower of Homage and the surroundings of the castle have been digitally modified to match the respective fictitious place and the setting of the scene.

The scene shows Jamie Lannister, after the confrontation of his army with that of House Tyrell, accessing the castle courtyard that leads to the garden through which he walks until he finds the route to Olenna Tyrell’s hall, where she will be waiting for him. This scene presents a sequence of shots that allow us to briefly observe part of this garden and the route that he takes to the Tower of Homage. In one of these shots you can even see Olenna’s balcony in the background, mentioned above. 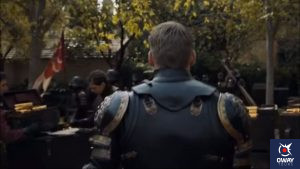 In the next scene, the woman is sitting around a round table to receive Jaime Lannister, already inside the Tower of Homage. In this last encounter, Olenna confesses that it was her who murdered Joffrey Baratheon (played by Jack Gleeson) in the so-called Royal Wedding or Purple Wedding, where he married Margaery Tyrell (at the beginning of the fourth season). 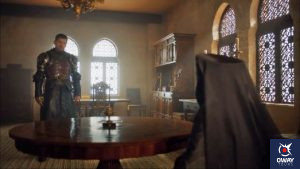 In this room you can see the windows of Arab origin that still remain despite the different periods through which this building has passed.

The Invasion of Casterly Rock 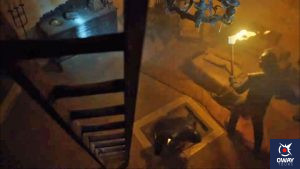 Prior to the scene of the arrival of the Lannister army at Highgarden, the chapter shows the assault of Daenerys Targaryen’s immaculate army on Casterly Rock, the Lannister residence. Along with the voice-over of the actor Peter Dinklage, who plays Tyrion Lannister, we are presented with a sequence of scenes of the battle. Before the battle begins, one of the close-ups shows two soldiers sneaking into the fortress through underground tunnels that connect the inside of the castle with the outside. In this case, the place used for the filming of these scenes was the castle dungeons. 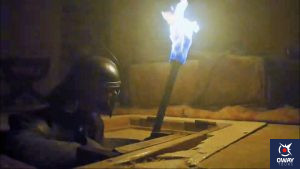 Among the reasons why the Castle of Almodovar del Río was chosen by HBO for such a well-known series is the history of this place. It was built around the year 740 by the Arabs, who took advantage of the strategic location of earlier primitive remains found at the top of the hill. Taking advantage of the height of the hill (approximately 200 meters), they decided to raise this military fortress that would later be taken by D. Fernando III “The Saint “.

Later the castle was bought by D. Francisco de Corral y Guzmán and since then it has been owned by the same family, passing from generation to generation. The Almodovar de Río Castle, as you will have seen in this article, preserves the steps of periods such as the Christian and Muslim ones in all its structure, which captivates not only its visitors, but also producers and casts as renowned as those of Game of Thrones.