▷ The 8 Must-Sees of the city of Cordoba | OWAY Tours 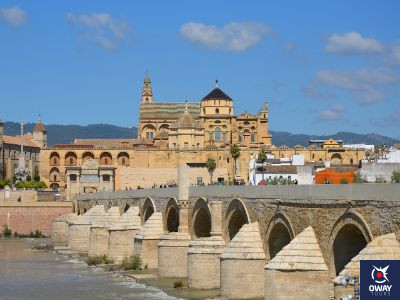 Cordoba is the city that has four declarations of World Heritage by Unesco, so it has many must-see places to visit.

It is one of the most beautiful destinations in Spain, so it has many essentials such as monuments and an infinity of places to visit and things to see. It has unique squares, narrow streets, Roman remains, festivals, an exquisite cuisine and a fantastic atmosphere, so do not hesitate to visit this World Heritage City, which will surprise you and will be a memory for life.

Cordoba is one of the 15 cities declared World Heritage Sites in Spain. In addition, it has festivals in which you cannot miss, come and enjoy its patios, the guitar festival, or its fair. Also visit one of its most important must-sees, the famous Mosque-Cathedral of Cordoba. Are you going to miss it? Read on to know the 8 must-see places in the city of Cordoba.

The Mosque-Cathedral is the most emblematic monument of the city and the most essential. The Mosque is formed by several styles such as Gothic, Baroque, Renaissance and Mudejar and all these styles come together giving rise to a unique monument in the world that you will fall in love with.

The Mosque has a courtyard, called the Patio de los Naranjos, which is the one that will welcome you and you can observe its beauty and sit by the fountain and enjoy the surroundings before entering the interior of the temple.

Enjoy the interior of the temple and each of its corners calmly, as it is one of the most beautiful places you will visit. One of the things you cannot forget to visit inside is the maqsura, which was the place that was reserved for the prayer of the Caliph. 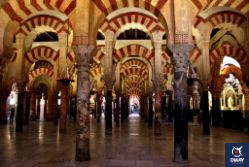 One of the declared World Heritage Sites is Medina Azahara. This is an archaeological site, which is located 8 kilometers from the center of the city of Cordoba and located at the foot of Sierra Morena.

In this archaeological site, you can see the ruins of the city that was the core of power of the Caliphate of Cordoba. From this site you cannot leave without visiting the Rich Room, which is one of the most impressive places that remain on this site and all that were in the time of splendor in the city. This room was the place where the Caliph received foreign leaders arriving from other cities. 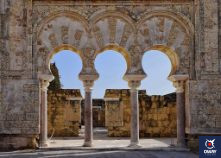 Alcazar of the Christian Monarchs

The Catholic Monarchs spent several years in this fortress while they carried out the campaign against the Kingdom of Granada. The Alcazar is one of the monuments that you should not miss if you come to visit Cordoba.

This place is also well known, as it is where Christopher Columbus asked for help to undertake the journey that would lead him in the future to discover America, so it is a monument which is full of history and peace.

Enjoy its gardens and its beauty calmly strolling through them. In addition, you can visit the rooms of which it is composed. One of the rooms that stands out is a small baroque chapel, which is the Hall of the Mosaics in which Roman pieces of this type that come from the subsoil of the Corredera are exposed. In addition, under this room we can find the bathrooms.

The Alcazar has two courtyards, but the so-called Mudejar is the most striking for its beauty. You can also enjoy its impressive gardens. 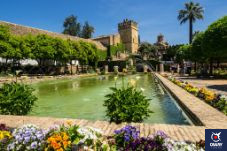 This bridge has a lot of history. Formerly the bridge was the only entrance to the city from the south.

This bridge joins the two banks of the Guadalquivir River that passes through Cordoba. The Roman Bridge for more than 20 centuries, was the only bridge that the city had, also over the years has undergone several reforms. The most current reform is the pedestrianization of the bridge.

The main structure of the bridge comes from medieval times. This bridge consists of sixteen arches, four pointed and the rest are semicircular. In addition, in the center of the parapet of the bridge we can observe a sculpture of San Rafael, which was the work of Bernabé Gómez del Río. 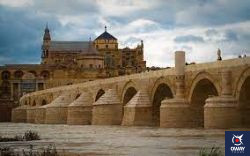 The Church of Santa Marina is part of the route of the eight Fernandine churches and these are distributed throughout the historic center of the city.

This church was ordered to be built by King Fernando III El Santo after his reconquest. This church is in the Plaza del Conde de Priego. Once you visit this church, it is advisable to visit the other seven that are part of the route of the Fernandine churches.

This church is of Galician origin, formerly this, bordered the wall that in turn separated the Ajerquía of the town and the Puerta del Colodro that currently does not exist. 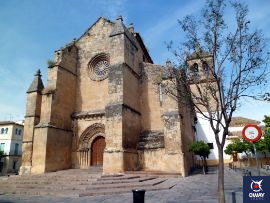 The Judería is formed by many narrow and twisted streets of Cordoba, which preserves a Jewish quarter. Among these streets you can find thousands of corners of Cordoba that you will love. One of the best ways to visit the Jewish Quarter is walking aimlessly through its streets and letting yourself go to see everything that catches your attention.

The Jewish Quarter is part of the area that was declared a World Heritage Site by UNESCO in 1994. This neighborhood has an Islamic layout as it is composed of two central cross streets and a maze of small roads that end in dead ends.

This neighborhood is bordered by the Puerta de Almodovar to the famous Mosque-Cathedral and the current Episcopal see. Recently the Network of Spanish Jewish Quarters created an element that serves for pedestrian signage and is common to all cities that are members of this network. This has a purpose and that is that tourists can recognize it during their visits. 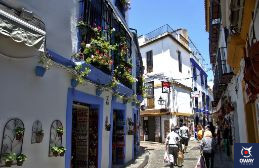 This alley is one of the streets you should not miss if you visit the Jewish Quarter. It is located a few meters from the Mosque-Cathedral. This street has become one of the most emblematic sites of the city as it is a typical postcard that tourists seek to photograph and remember.

In the Calleja de las Flores you can see the most impressive views of the city, you will also see the Bell Tower of the Mosque. This street is formed by houses of the old part of the city with white roofs and an endless number of flowerpots that impregnate freshness and color.

It is a place of special interest for those who come to visit Cordoba. Over the years the houses have been replaced by souvenir stores or other businesses that thrive on tourism. At the end of the street, we can see a small square, which is a neighborhood courtyard.

In the Palacio de Viana, you can enjoy 12 fantastic courtyards and impressive gardens. Around these areas you can see a great collection of paintings, tapestries, crockery, tiles and weapons. This is a palace that is 4 centuries old.

This palace will transport you to another era and you will be able to learn about the evolution of lifestyles and tastes. In the palace you can also visit the house, which is made with architectural styles, decorative arts and environments related to the aristocracy. The tastes of our ancestors are reflected in this house and through the palace’s art collections.

In the palace what stands out most is its spectacular courtyard as it is of the Roman and Arab tradition. Here you can enjoy an example of popular architecture, and Renaissance courtyards as a symbol of power.

In the Palacio de Viana, you can see the spectacular historical and sensory tour of the courtyards of Cordoba. 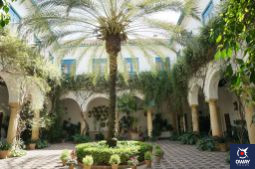 At OWAY TOURS we offer different guided visits and tours. Follow the links for more information: