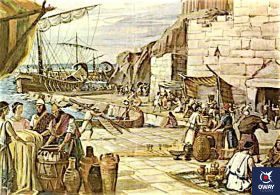 Malaka or mlk was a Phoenician settlement located on the Iberian peninsula on the south coast, and is what we know today as the city of Malaga. The actions and activities of the Phoenicians left indelible traces in Malaga, together with a modification of the territory that is still present today, making it one of the oldest cities in Europe.

During their settlement, the Phoenicians did not limit themselves solely to trade, but also developed an important commercial agriculture of great importance, above all the cultivation of vines, as well as an important industrial and metallurgical activity.

Due to this strong economic activity, the land underwent major changes that led to the end of the image of the mouth of the Guadalhorce between the 9th and 6th centuries B.C. Stay with us if you want to know much more about Malaga in Phoenician times, something that changed the city forever! You won’t regret it.

As a result of their long voyages, the Phoenicians left an important legacy throughout the Mediterranean, becoming the most important traders of antiquity. In the course of time, these trade routes resulted in settlements, where they not only supplied themselves with raw materials, but also processed them.

Nowadays there are not many remains of their presence, which is why the few that can be found are considered so important throughout Andalusia. Read on and find out much more about the Phoenicians and Malaka.

Malaka and its history

One of these settlements was Malaka, where they founded a factory. At that time, there was another settlement of Bastetanians, who came from the Iberian Peninsula, and whose industry was dedicated solely to salting and the production of purple dye. After the settlement of the Phoenicians, Malaka became a flourishing place that even had its own currency.

In the beginning, this settlement was located at the foot of the slopes of Mount Gibralfaro, as its natural bay offered a good harbour for their boats. After the arrival of the Romans on the peninsula, Malaka continued to prosper, as there was no conflict and it was granted autonomy from the empire and was able to retain its culture and traditions.

Over time, the city was Romanised and became a municipality. Roman buildings were integrated and the port was enlarged, among other things.

At that time, the mouth of this remarkable river had the appearance of an estuary, in which a series of islets emerged. Some of them were so large that they became the first refuges for the development of the Phoenician culture. However, due to afforestation, erosion and a series of floods took care of destroying the estuary in a relatively short time, leaving it with the appearance it has today.

The oldest remains of Phoenician origin present in the bay of Malaga date from the 9th century and took place at the same time as other settlements located in what is now the city of Huelva, making both the oldest settlements on the Iberian Peninsula.

This was a much more consolidated settlement with a modern urban structure.  This suggests that perhaps the origin of the urban fabric is to be found not so much in the Greeks but in the Phoenicians.

There are researchers who affirm that the Phoenicians’ objective was to establish relations with the local world; something that can be demonstrated by how well those first contacts they had with the local population worked.

This settlement had streets up to 5 metres wide, large residential houses, metalworking and pottery workshops, shops open to the street, a port area, etc.

However, unlike Malaka, the settlement of Cerro del Villar was destroyed years later than its date due to a destructive event of marine origin. It is not known exactly whether the catastrophe was due to a tsunami or a strong Levante storm.

The first industrial estate in Malaga

Once the area had recovered from the catastrophe, a settlement of an industrial rather than residential nature began to be observed. It was at this time that the Phoenicians created the first industrial estate in Malaga.

Malaka the most emblematic settlement in the bay of Malaga

This settlement was the basis for the development of the city we know today. The prosperity of Malaka was partly due to the destruction of Centro de Villar. From the year 600 onwards, Malaka became a very important city with a great wall and a large port.

This city became an important trading centre, where fish sauce became the commercial product par excellence. The cultivation of vines to produce grapes and wine is another of its strong points.

At Oway Tours you can also enjoy the following alternative: