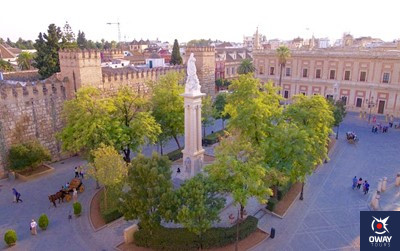 Next to the Sevillian Royal Alcazars we find this square so touristic acclaimed and very crowded by visitors from all over the world, horse carriages and the inhabitants of the capital themselves, all looking to take advantage of the pleasant environment where it is located. It is the perfect place to rest from a busy afternoon of sightseeing, observing the monumental beauty of the buildings you guard and enjoying the good Mediterranean climate of the city. Want to know about la Plaza del Triunfo of Seville? Well, read on to find out all the information about her.

Originally, this square (work of José Tomás Zambrano) was known by the Archive of the Indies as “Plazuela de la Lonja”. However, in the eighteenth century (specifically on November 1, 1755) a fateful earthquake occurred in Lisbon that was felt in Seville while the celebration of the Mass of All Saints was held, because of this, it was renamed to the Plaza del Triomphe in honor of this event.

History tells that the faithful who were inside the cathedral went out to the square to protect themselves from a possible collapse and in the place where they “took refuge” was where it was decided to place the famous temple that we can observe today in an area of the square. In fact, this symbol is the greatest testimony of what happened during that autumn day in Seville, because it is also considered a way to thank God for his protection from the accident that occurred (which collapsed more than 300 homes and caused nine deaths in the capital). The monumental buildings also suffered various damage, becoming the idea of melting the Gold Tower due to the damage it suffered.

At the beginning of the twentieth century the square was remodeled, adding in it a monument that refers to the Immaculate Conception. Currently, in the Plaza de Triomphe there is an annual Thanksgiving Mass to commemorate what happened in Lisbon. 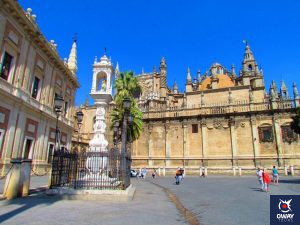 As we have already mentioned, the square is located in one of the most privileged places in Seville, is the perfect environment to make a visit and is currently used by many tour guides as the finish point of your tours. Its historical-patrimonial complexity is of severe importance, since around it we find no more or less than six of the most representative elements of the capital: El Templete del Triunfo de Nuestra Señora del Patrocinio, the Cathedral, the Royal Alcazar, the Giralda and the monument dedicated to the Immaculate Conception.

It is a place full of life, where you can enjoy the purest Sevillian art with the music of university tunas, the sound of horse carriages walking the asphalt and the obvious beauty that its surroundings offer. If you want to know the essence of Seville, be sure to visit the only Plaza del Triunfo, as you will not find a better place to do it than this.

This small sculptural ensemble built on a baroque column was erected in 1757 due to the Lisbon earthquake, as a way to thank God and the divine for preventing the disaster from causing major damage in Seville. It is located behind the back of the Indian Arch and inside contains an image of the Virgin of Patrocinio.

It is a monument of great recognition, both artistic and aesthetic and historical, since it is the only element of the city that represents the events that happened and that has a constructive model of such style. If we approach the pedestal of the column, we will observe a transcription where the events that occurred are recounted and explains why of the existence of this temple in the square. In addition, as protectors of the Giralda (which suffered very little damage during the earthquake) inside the pedestal we find the image of Saint Rufina and Saint Justa. 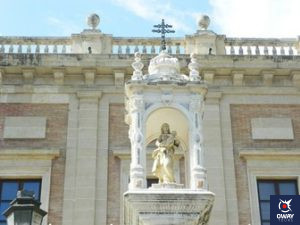 Full name “Cathedral of Santa Maria de la sede” we find the building of greatest historical-monumental importance not only of the Plaza de Triomphe, but of Seville in its entire place. It is Gothic in style and is believed to have been built in the early fifteenth century on the bed of an old Aljama Mosque whose vestiges we currently known as La Giralda (which is the mine mine) and the Patio de los Naranjos (which shares its name with that of the Mosque-Cathedral of Cordoba). In the temple of the cathedral rest the remains of the navigator Christopher Columbus and several kings of the kingdom of Castile such as Peter I the Cruel, Ferdinand III the Holy and Alfonso X the Wise. 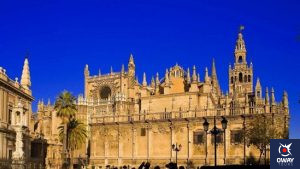 Visiting hours are Monday through Sunday at the following times: 8 a.m. to 2 p.m. and 4 p.m. to 7 p.m. The entrance fee is 16 euros per person (including the visit to the Giralda) and each visitor will be provided with a headset for a self-guided visit. If you just want to see the Cathedral, the price is 10 euros per person. Children under 14 years old and disabled people will enter for free.

There is also the option to make a free group visit and arrange in advance on Mondays from 16:30 to 18:00 in the afternoon.

Another essential visit if you come to the capital, is the Real Alcazar of Seville. This palatial ensemble is currently one of the most visited in the city, with more than a million visits throughout the year.

Its origin dates back to 913, when Caliph Abd al-Rahman III ordered the construction of a new political and government center in Seville on the remains of an old Visigothic-era building that had previously been Roman. This cultural mix has given rise to the curious building that we find today, with an appearance that attracts attention due to its architectural style. In addition, the building (both before and after being the Alcazar) was not only occupied by the cultures mentioned above, but in it have been present Abadies, Almorávid emirs and Almohads. All this multiculturalism led to a series of successive reforms that ended up culminating in a large palace surrounded by walls that has been preserved to this day. 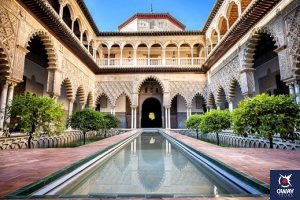 This building, officially named “Archivo General de Indias” is located behind the Templete del Triunfo de Nuestra Señora del Patrocinio. It was commanded to build in 1785 by King Charles III with the aim of combining in one place all the written information about the Spanish overseas territories, since the deposits where to date were (Simancas, Cadiz and Seville) did not have enough space to continue saving more documents. Currently, the archive holds approximately 43,000 archived documents, with some 80 million pages and 8000 maps and illustrations. It was declared a World Heritage Site in 1987. 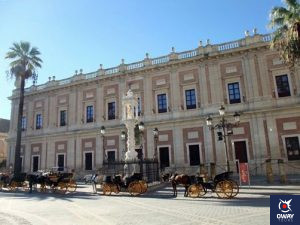 Within the construction complex of the Cathedral of Seville, we find its bell tower or alminar, known as La Giralda. At first glance, in addition to the cathedral, it is one of the elements that stand out most in the surroundings of the Plaza del Triomphe, either for its height (it is one of the highest points of the city, with 104’1 meters) and for its careful and splendid exterior decoration, where a series of polylobed arches stand out. 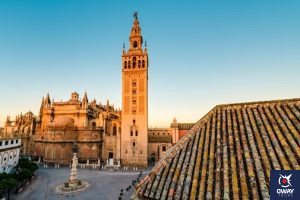 The tower was built in different phases, beginning to build the first part of it in 1000 a.d.C. constituting as the mine of the first building installing on the site, a aljama mosque

The visiting hours are the same as that of the cathedral, as both elements are included in the entrance for 16 euros (although you can choose to visit the cathedral without seeing the Giralda at a lower price) and you can take a guided tour if you wish (we recommend you consult the information on the official website of the monument)

Monument to the Inmaculada Conception

The city of Seville was the first to defend the Conception of the Immaculate Virgin Mary, so in 1918 it was decided to build this religious image of the Virgin in the center of the Plaza del Triomphe, looking towards the Museum of the Indies, with the Cathedral of Seville on your right and the Royal Alcazar on your left. 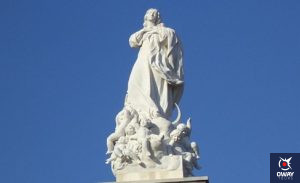 In an octagon of granite stands a wide pedestal, surrounded by the figures of four characters of the seventeenth century who stood out in their conceptionist eagerness: the Jesuit theologian Juan de Pineda, the poet Miguel Cid, the sculptor Juan Martínez Montañés and the painter Bartolomé Esteban Murillo. On the pedestal, four pillars of Ionian order support the image of the Immaculate Conception, based on the work that Murillo painted for the Hospital de los Venerables in Seville

In 1927  students  took the  custom  of  singing and offering flowers to the  virgin  in the  early morning of December 8 of each  year. Currently, this tradition  is preserved and consists of the tunas of the faculties of Seville going to the Plaza del Triunfo to sing their songs to the Immaculate Conception.

If you want to go by car, we recommend that you park it in a nearby car park since, in addition to being a historic neighborhood with many pedestrian areas, it is advisable to enjoy the surroundings of the Barrio de Santa Cruz. The nearest car parks are:

-Throughout history, the Plaza de Triomphe has had a lot of names, such as: the Plaza del Alcazar, the Corral de los Olmos, the Hospital del Rey, the Lonja, Graneros del Cabildo and los Canto due to a stone that was decided to be stored during the construction of the Cathedral of Seville.

-In 1848, a project was carried out to pave the square and level the land. This gave rise to the trees, benches and other decorative elements that we find today in the square. Although the place was always very busy, this project was very important, as it allowed the establishment of new ways of life in it.

-In 1892 and with the centenary of the Discovery of the Americas, it was proposed to change the name to that of Plaza de Cristobal Colón, but the idea was not accepted since the event of the Lisbon earthquake marked a before and after and the square is considered to have very ingrained and traditional meaning.

And if you are looking for a complete experience in Seville, Oway Tours offers you its best guided tours in the capital: