▷All the information about the Bridge of San Telmo

Information about the Port of Malaga 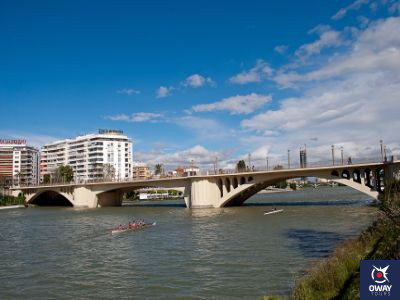 The San Telmo Bridge is located in Seville, province of the autonomous community of Andalusia. It is a concrete bridge that crosses the Guadalquivir River and was inaugurated in 1931. It connects the city centre with the Remedios neighbourhood, and it is a real marvel to walk over it, as the views from there give you an incredible image of Seville.

History of the San Telmo Bridge

This bridge, which owes its name to the Palace of San Telmo because of its proximity to it, was built between 1925 and 1931 by the engineer José Eugenio Ribera, with the aim of allowing the neighbourhoods on the north bank of the Guadalquivir River to develop and be connected to the rest of the city.

The San Telmo Bridge was the third bridge to be built in Seville, two years after the construction of the Alfonso XIII Bridge, and almost eighty years after the well-known Triana Bridge.

Initially, the bridge was functional and mobile, being supported by two piers extending to each side with an arch. In 1968, the central part of the bridge was transformed by a third fixed arch.

On the occasion of Expo 92, new works were started on the San Telmo Bridge, in which the Fernandine-style lampposts that had been part of the bridge since its creation were lost.

Today, the bridge has four lanes, two in each direction, a pavement on each side, and a bicycle lane. 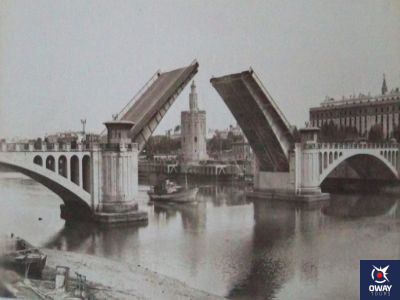 Another option is to get there by train, which also has different lines so you can choose the one that suits you best. These are: C1, C4.

Finally, you can also take the metro, although this means of transport has fewer timetables, and therefore fewer lines to choose from. The only one that reaches the San Telmo Bridge is the Ll.

Apart from travelling to this tourist attraction of Seville by means of the different means of transport available in the city, you can also get to your destination on foot, thus enjoying all the magic that Seville hides in each one of its streets. The Giralda Tower is very close to the San Telmo Bridge, so we recommend you to visit both places to have a more unforgettable experience of your trip to the Andalusian capital.

– In the 1970s and after its construction, the San Telmo Bridge began as a movable bridge, thus allowing the transit of large ships across the Guadalquivir River. However, it was in 1964 when it was planned to be built as it is today, a fixed bridge over which people could walk and which served as a link between one bank of the river and the other.

This change meant the definitive transfer of port activity to areas further south.

– At the beginning of this millennium, the situation of the bridge was worrying and traffic had to be limited.

– It is the second oldest bridge still standing in Seville.

– The Bridge of San Telmo is a tribute to the boat bridge that linked Triana with Seville from the 12th to the 19th century. 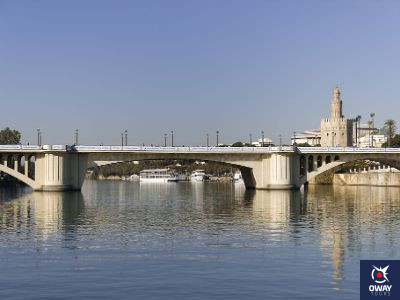 You may also be interested in the following post about visiting the Cathedral of Seville, a city from where you cannot leave without appreciating this great attraction last century. In addition, if you have time and want to make your visit to Seville more complete, we recommend the guided tour of the Cathedral and the Alcazar of Seville.

And if on the other hand you want to enjoy a visit with more freedom and knowing different points of the city, the best option is the free tour of Seville, where you will be able to know every corner that this beautiful city has.