Roman Temple of Cordoba, or the cult of the deified emperors - Oway Tours

The 6 Best Beaches of Mijas Costa

Roman Temple of Cordoba, or the cult of the deified emperors 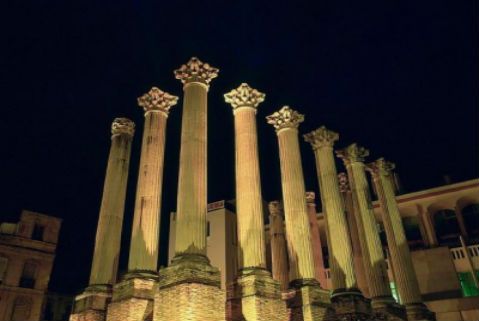 Near the mythical Tendillas square is one of the most impressive Roman remains of Cordoba: the Roman temple, offering a contrast that only the city of the three cultures can have: an austere and Castilian square in contrast to a temple of imperial worship inherited from the emperor Claudius himself.

Discovered by chance in the 1950s, this classical Roman temple is now an essential part of the city’s landscape to surprise the visitor with an authentic archaeological treasure that can be observed in the open air and why not? To see it in the purest Cordovan style, from a good terrace in the sun and with a tapa accompanied by a beer.

On the Roman temple, the heritage of the Roman marble

Dedicated to the religious worship of the mythological gods, the Roman temple and its impressive columns were erected to demonstrate the power of the Roman Empire in the city of Cordoba.

Of a polished Corinthian style, the temple could be seen from the main road, the Via Augusta, to offer an impressive view from all parts of the city.

To strengthen the Roman domination in Cordoba, as well as the cult, the emperor Claudius ordered the construction of a temple in one of the main enclaves of the city. Its construction would be completed forty years later under the reign of Emperor Domitian, when the temple was equipped with a technological advance for the time: water supply.

The result was an elegant temple of six Doric columns raised on a podium, surrounded by water and in front of an altar where the rituals of worship could be carried out, practically built in high quality marble, it was located on the border of the Colonia Patricia and close to the circus.

After the fall of the empire, the temple would also fall into oblivion until 1950, when it was rediscovered by surprise in the extension works of the town hall, so today you can enjoy your visit, or even find some original pieces in the Archaeological Museum, from reliefs to capitals.

Facts and curiosities of the Roman temple

Visiting the Roman temple of Cordoba

In short, the Roman temple is an obligatory stop on a visit to Cordoba, to get to know its Roman dimension. From a daytime or even nighttime walk to admire the lighting that enhances its magnificence, it is a temple that does not leave the traveler indifferent.

Located in a strategic enclave, near the Tendillas square and the town hall, it is easily found on a walk through the center of Cordoba.

As you will see, today you can enjoy the most Roman side of Cordoba and take a tour of the main vestiges of the era of Roman splendor, when the emperors were divinities and the people had fun with bread and circuses, in the circuses where gladiators fought among themselves and against ferocious beasts.

Will you dare to discover Cordoba?