Las Cruces of Mayo in Cordoba - visit them with Oway Tours 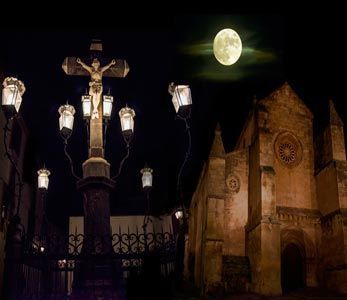 In Andalusia the first references to this celebration date back to the 17th century, with the appearance of the brotherhoods around the Christian symbol of the Cross. That’s why it is difficult to know when it was first celebrated. However, there is a clear milestone for this celebration of popular origin.

What are the Cruces of Mayo?

The Town Council organised a competition for the first time in 1925 to reward the beauty and ornamentation of the crosses. They were smaller than the current ones, with a wide variety of popular flowers. They were found in the orchards and courtyards, and always with the shroud, as it was the cross from which the body of Christ had descended.

It was not for nothing that there was a celebration, with full springtime signs, of the triumph of the cross on which Christ had died to redeem mankind, and this celebration took place shortly after Easter.

Flower-lined crosses are erected in squares, passages and open spaces. They’re decorated with manila shawls, multicoloured bedspreads and folk elements. They are also by plants and pots with a traditional decoration reflecting the characters of the area, all around the cross as a central axis.

The neighbourhood associations and peñas are in charge of making Cordoba full of colour and festivities. The crosses can be visited throughout the day and at night. There are also bars where typical tapas such as salmorejo, flamenquín or tortilla de patatas are served, as well as refreshing drinks such as Montilla Moriles D.O. wine. All enlivened by sevillanas music and nightly dance shows.

The jury of the Cruces of Mayo Cordoba  competition will evaluate the following issues: the aesthetics and natural decoration of the cross (from zero to ten points). Also,  the use of and respect for the elements of the environment (from zero to five) and the effort, involvement and assistance shown by the neighbours of the area to maintain this festive tradition (from zero to five).

Thus, the month of May exalts, even more if possible, the beauty of Cordoba. The Cruces of Mayo, the Courtyards Competition, the Montilla-Moriles Wine Tasting and the Fair of Nuestra Señora de la Salud, in that order. Overflow with the feelings and  the people of Cordoba, the merriment of their stalls,  their guitarists, singers and dancers.

According to the rules of the Cruces of Mayo of Cordoba contest, there are three modalities in which the crosses can participate: Historical Centre; Modern Zone and Enclosed Area.

In 2017 the first prize in the popular competition finally went to El Sepulcro in the category of closed enclosures. This year, the Brotherhood and Sisterhood of the Holy Sepulchre will participate in the celebration with a Cross in the Triunfo de San Rafael. 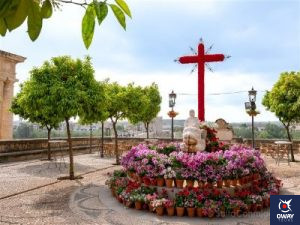 History of the Cruces of Mayo

There are several hypotheses about the origin of this celebration. Some claim that its origin comes from pagan festivals celebrated during the month of May. It started to commemorate the arrival of spring, where a young woman dressed in white and crowned with flowers was the “Maya“, in allusion to the month of flowers.

However, there are other historians who claim that the origin of the celebration of the “Cross” goes back to Roman festivals, since on the 3rd of May Saint Helen found the Holy Cross, and to verify that it was the real one, she placed it on sick people and cured them. On the day of her death, St. Helena asked all those who believed in Christ to celebrate the commemoration of the day it was found.

It is not known exactly when this popular tradition began to be celebrated. Nonetheless, it seems that during the 18th and 19th centuries it was very successful in many provinces of Spain. Even though the tradition has been lost in some places,  there are still many cities where the festival is still celebrated.

In 1974, the Brotherhood of Jesús Nazareno was the first to set up its own May Cross. Nowadays, it is the Easter brotherhoods that are the main participants in this event, as they have displaced the peñas, which focus especially on the Romerías. 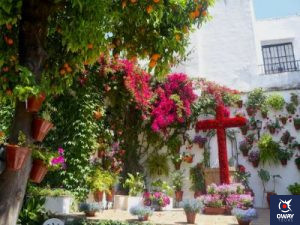 The May Crosses will have a different date each year, although it will vary very little, always being the first weekend in May. For example this year 2021, although due to the coronavirus it has not taken place, it was scheduled to be held from 28 April Wednesday to 2 May Sunday. Admission is free, and there are different categories where the crosses are placed.

Moreover, there are three categories: the crosses located in the historic centre,located in modern areas and those in enclosed spaces or enclosures. Also this year, the timetable for visiting the crosses was from 11 a.m. to 10 p.m., although generally the timetable is from 12 a.m. to 5 p.m. and from 8 p.m. to 2 a.m. The crosses are open to the public. 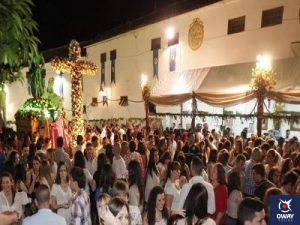 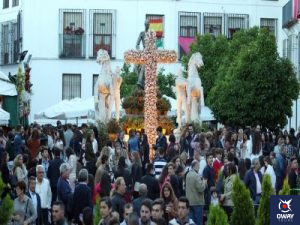