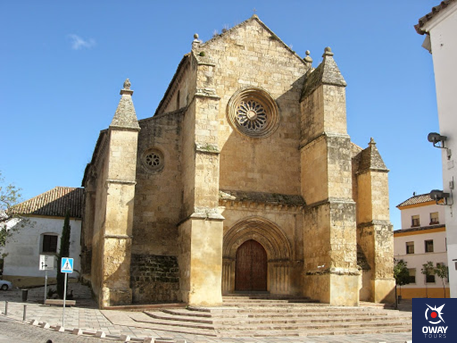 Full name Church of Santa Marina de Aguas Santas, is located in the historic center (specifically in front of the Plaza de Santa Marina) of Córdoba this old religious building considered one of the architectural jewels of the city. It is part of the group of so-called Fernandinas Churches, that is, a set of buildings distributed throughout the city that have style and common parts, all of which are of great symbolic importance in the history of Cordoba. Want to know more about the Church of Santa Marina? Well, read on and you’ll find all the information about her.

The Church of Santa Marina was commissioned to be built during the thirteenth century by King Ferdinand III, since from there the name of the group of which it is part originates. At that time the Neighborhood of Santa Marina was little inhabited, and that is why the monarch, with the aim of inhabiting the area and providing it with a religious and administrative seat, had the aforementioned church built.

Of the so-called “Fernandinas”, Santa Marina (next to that of the Magdalena, also in Cordoba) is the oldest church of them all. Due to its antiquity, over the centuries it has undergone various restorations to maintain its integrity.

Among these reforms we highlight the one carried out by Hernán Ruiz in the sixteenth century, which built the tower of the current bell tower. Later, major modifications were also made such as the transformation of the apse, where the famous “Chapel of the Benavides” was placed, the inclusion of several Baroque-style vaults or the installation of the “Chapel of the Sacrament”. Finally, in 1998, after the church had suffered the consequences of an earthquake several centuries ago, work was carried out where it was largely possible for the construction to show its original appearance today.

The church has a particularity, and is open 24 hours a day, being about 11:00 in the morning and 19:00 in the afternoon the time of day where it is most crowded (especially in the spring and summer seasons)

If in addition to visiting it you want to attend Mass, different schedules have been established depending on the time of year:

These visits will always be conditioned on the demand of worship, if on any occasion any unforeseen events arise from the religious community the visits will be restricted. It is one of the monuments considered a must whether you are sightseeing in Cordoba or living in the city, because we are offered the possibility to enjoy one of the most important Cordoba heritage elements for free and at the time we want.

It is not advisable to go to the historic center of Cordoba by car, as its narrow streets make it difficult to drive. If you are determined to do so in this way, we recommend leaving your vehicle in a nearby car park (on Avenida de la Victoria you will find one for a fee) or in the public car parks available before accessing the center.

-In the place where today is the Church of Santa Marina stood before this a temple of 7th-century Visigothic origin. It is believed that it was a Mozarabic-style mosque, although this is not entirely certain because no vestige of it has been found.

-Outside stands out the facade  and rose window of Gothic style -Mudejar, emphasizing the tower (made in  the  sixteenth century),by Hernán Ruiz II. Inside is distinguished the funeral chapel of the Orozco, of Mudejar aesthetics, built in the fifteenth century,  the chapel of Our Lady of the Rosary  (installed in the seventeenth century) and the paintings of the artist  Antonio del Castillo. 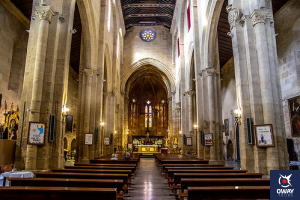 -In front of the church we find the well-known Plaza de Santa Marina, guarded by a sculpture of the late bullfighter “Manolete”. This sculpture was installed in 1996 and next to the church completes the historical interest of the place, which usually attracts the attention of visitors. 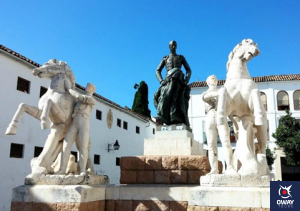 -It was declared of Cultural Interest in the category of Monument in 1931 and was subsequently registered in the General Catalogue of Historical Heritage of Andalusia. This decision was made because in addition to being part of the cultural heritage of Cordoba, it has elements of exceptional worth and occupies a remarkable extension of urban land.

-In 2019 there was damage caused by pigeons in the rose window and church stained glass windows. For this reason the City Council approved the placement of meshes so that the birds do not perch and thus maintain the integrity of the construction.

And if you are looking for a complete experience in the city, Oway Tours offers you the best guided tours in Cordoba: