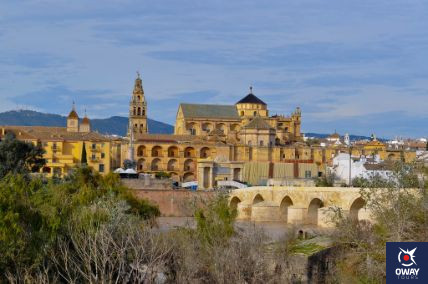 Cordoba is one of the cities that you have to visit at least once in your life, as you will always find historical corners and you will never get tired of touring it. Every time you make a trip to this impressive city you will always discover something new that you had not seen before.

Cordoba is known as the city of the three cultures, since Muslims, Jews and Christians have made Cordoba a destination that blends and unites East and West.

One of the most emblematic attractions of the city is the Mosque-Cathedral as it is one of the most important monuments of Andalusian architecture and is the only mosque in the world that has a cathedral inside. But not only Cordoba stands out for the Mosque, but also for its famous Jewish quarter, the synagogue, the Alcazar of the Catholic Monarchs or one of the most famous festivals in the world, the festival of the Patios Cordobeses.

Cordoba has thousands of kidneys that have a unique and indescribable beauty and to enjoy it you have to come to the city. One of the best ways to visit Cordoba is by taking a free tour. Are you going to miss it? 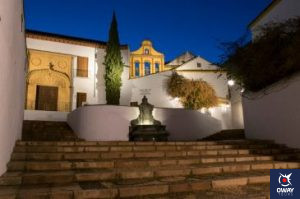 The chapel of St. Bartholomew, the unknown beauty

This chapel is integrated in the Faculty of Philosophy and Letters of Cordoba, and is perhaps one of the least known monuments of Cordoba and at the same time one of the most beautiful. To access this chapel must be accessed from the outside of the complex from Averroes Street.

This chapel forms a spectacle of Mudejar art in Cordoba along with the royal chapel of the Mosque and the synagogue. This church was begun at the end of the 14th century and reused materials were used and therefore its construction was incomplete.

Inside this chapel we can observe the mixture between Christian and Arab cultures and where it is worth mentioning the tiled plinth, its Gothic vault and a collection of thirty-five Nasrid tiles.

This chapel was declared BIC in 1931 as it is part of one of the best temples of Mudejar art in Cordoba.

The mills of the Guadalquivir River, the heritage of the flour-making tradition.

These mills are located on the banks of the Guadalquivir River and are part of the historical heritage of the city. Today, eleven mills are preserved, each with a different name. Their names are Albolafia, Alegría, Carbonell, Casillas, En medio, Martos, López García, San Rafael, San Lorenzo, San Antonio and Pápalo. Many of these mills were created between the 7th and 11th centuries and most of them worked by means of hydraulic energy generated by the river as it passed by.

One of the most outstanding mills is the Albolafia, which is even represented in the coat of arms of the city of Cordoba. This mill was ordered to be built by Abderramán II and its function was to carry water from the river to the palace of the Emirs. Later, it was dismantled because Queen Isabella the Catholic was bothered by the noise during her stays in the Alcazar.

If you want to see what the mills are like inside you can visit the San Antonio mill where you will learn how a regolfo mill worked to grind grain.

The Roman temple of Claudius Marcellus

This temple can be found in the area known as the provincial forum of Colonia Patricia. This temple dates from the middle of the first century and here we can see the reflection of the grandeur of the city during that time.

This temple is composed of eleven columns and made of marble and is also built on a slope, which made it necessary to build a terrace with fan-shaped walls.

If you want to visit this temple of which you will be surprised you only have to access to the street Claudio Marcelo and at the foot of the street we will find the building that is surrounded by a glass screen.

If you want to visit the interior you have to access through the facilities of the City Council, also one of the most beautiful ways to visit this temple is at night because it has a special lighting.

Route of the Fernandine Churches, the origin of the neighborhoods

This route is made up of several churches that were created between the middle of the 13th century and the beginning of the 14th century. These churches were ordered to be built by Ferdinand III. All these churches are of medieval architecture and that, after the reconquest of the city, were nuclei of urban repopulation.

To begin this tour of the Fernandine churches you have to go to the mosque, as this is where this route begins. After starting at the mosque, it crosses seven neighborhoods and the territory of the Axerquia. Currently, this route is raised by the temples from the Church of San Andrés to the rest of the Santo Domingo de Silos. Here we can enjoy an impressive tour in which art and religion are mixed equally. 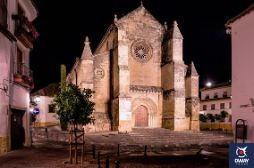 The Christ of the Lanterns, adored by the people of Cordoba

The Christ of the Lanterns is one of the most loved sculptures by the people of Cordoba. It is also called El Cristo de los Desagravios y Misericordia. This Christ can be found in the historical center of the city in the Capuchinos square. In this square we can see a figure of Christ illuminated by eight lanterns and also in which the square itself retains its original cobblestones.

This place has an indescribable beauty and this is due to the location and the passion that the people of Cordoba feel for their Christ. One of the most beautiful ways to visit this square is attending at night because it is illuminated only by the lights that surround it.

One of the legends of the city of Cordoba tells that every night around midnight, footsteps were heard in the empty square and in which a hooded man was seen muttering in front of the Christ.

This man disappeared forever, but before doing so he revealed his identity and this was a soldier of the king who after many years had been assaulted by thieves and when he was about to die, he woke up in front of the Christ and therefore since then he approached every night to this square to thank the Christ. 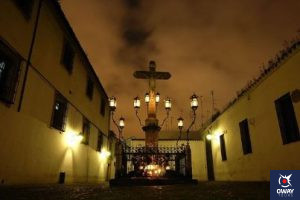 The alligator of the Fuensanta sanctuary, the subject of numerous legends.

The Sanctuary of Nuestra Señora de la Fuensanta was built in the place where tradition says that the Virgin appeared over a well with healing properties. This tradition said that whoever drank water from that well came to heal their illnesses.

In this sanctuary its wall is decorated by curious objects such as an alligator, a whale rib, the shell of a turtle and the saw of a sawfish. These objects do not know where they come from, but everything points to that Cordovan travelers brought them from America.

The caiman has a legend and it is that in the past an enormous flood of the Guadalquivir River caused the arrival of a terrible caiman that caused panic in the city. The people of the city lived in fear, but that ended when a man decided to kill it with a blow to the head. For this reason, it is a tradition to visit him during the vigil of the Fuensanta.