➤The Neighbourhoods of Cordoba, Discover them all | OwayTours.com

The Best Vegetarian Restaurants in Seville

The neighbourhoods of Ronda 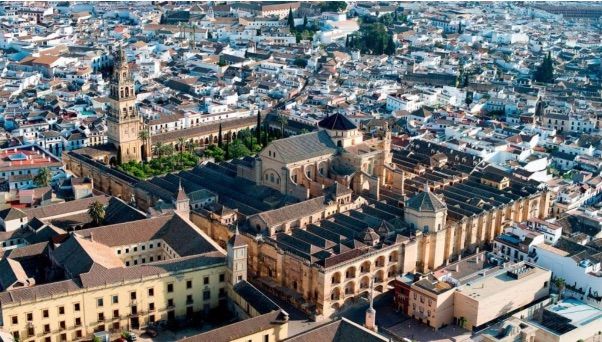 Cordoba, a Roman, Moorish, Jewish and Christian city, has more than thirty neighbourhoods. They all have experienced the passage of so many different cultures throughout history and whose reflection can still be seen today. The city of Cordoba has ten districts which are as well divided into Neighbourhoods. In this post we’ll tell you about the main neighborhoods that you won’t want to miss in your visit to Córdoba. Here we go!

The Jewish Quarter of Cordoba is the most important district of the city. It is considered a UNESCO World Heritage Site. The Jewish Quarter is the old quarter that used to house the Jewish population. Nowadays, still has a great wealth of monuments that are the legacy of the Roman, Arab and Christian era. It extends around the Mosque-Cathedral of Cordoba. This old Mosque, which was built during the Andalusian Caliphate of Cordoba, was converted to Christianity in the 13th century.

In the Jewish quarter, one of the three synagogues that exist today in Spain has also been preserved. In this area there are also several important monuments such as the Arab baths, in the Campo Santo de los Mártires; the Bullfighting Museum, and the municipal souk.

Another factor that gives great charm to the Jewish quarter is its atmosphere. Its restaurants, bars and terraces of this neighbourhood are always full of people enjoying the regional gastronomy. 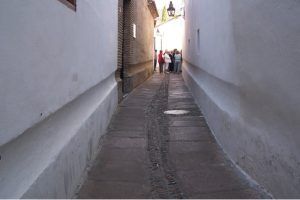 Santa Marina is a very traditional neighborhood. It is located north of the old town, bordered by the old wall on Avenida de las Ollerías (Ollerías Street). This neighborhood takes its name from the Church of Santa Marina. It was ordered to be built in the Visigoth period by King Fernando III of Castile. Was made after the conquest of the city to the Muslims in the thirteenth century.

In front of the church is the Plaza Condes de Priego (Condes de Priego Square). Here is the statue of Manolete stands, in honour of the famous bullfighter who, like many others, was born in this neighbourhood. The Barrio de Santa Marina is known for being the birthplace of bullfighting.

The Torre de Malmuerte (Malmuerte Tower), built at the beginning of the 15th century. It owes its name after the legend of the comendadores of Cordoba, a tragic story of jealousy and revenge. It was part of the wall and was built as a defence tower. However, it ended up being used as a prison for members of the nobility.

Finally, it is worth mentioning the Palacio de Viana (Viana Palace), which houses a museum. Its collections contain unique sets of French and Spanish style firearms, tapestries and furniture, as well as an extensive library. The gardens that surround this magnificent palace give off an unparalleled fragrance thanks to their great variety of flowers. 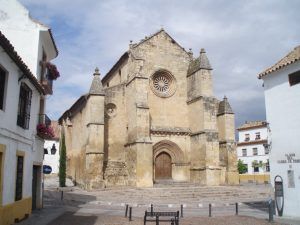 The San Basilio quarter was built in the 14th century by Alfonso XI, to house the service staff of the royal fortress. It is also known as Alcázar Viejo and is located in the southwest area of the old city. Today, it still retains its own medieval Christian structure with three parallel streets: San Basilio, En medio and Postrera.

In this neighbourhood, the Alcázar de los Reyes Cristianos and the Caballerizas Reales are worth mentioning, as well as the Puerta de Sevilla, which served as access to the city and was part of the old western walls of Córdoba.

The month of May is the time when the San Basilio neighbourhood is at its most splendid and active. For here you will find some of the most beautiful Andalusian patios, which surprise thousands of tourists every year. 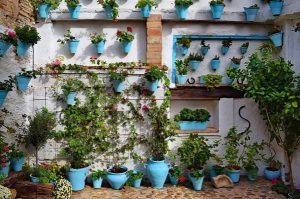 The San Lorenzo district is located in the old Arab suburb of Munyat al-Mugira, to the west of the Central district. It was here that the famous 11th century Muslim poet, author of “The Necklace of the Dove”, was born and lived.

After the reconquest, an old mosque was replaced by the Church of San Lorenzo, also in the time of Ferdinand III. This is said to be the most beautiful church in the city. It has a magnificent Gothic-Mudejar rose window on the main façade and a front portico with three arches. These, together with the three-level tower, form a splendid medieval setting.

The San Lorenzo district is popular for its history of Cordovan courtyards, as it shows the true life of the urban population in ancient times. Although many buildings have been demolished in order to build new homes, some houses still maintain their traditional style. In May they open their doors so that people can admire them. 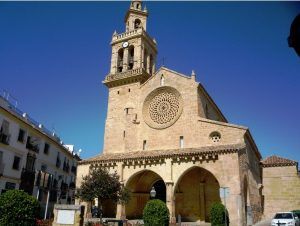 This neighborhood was known to be inhabited by silk embroiderers. The church of San Andrés is the center of life in this neighborhood. It was built over an old Visigothic basilica of San Zolio, a cultural center where young Mozarabs from Cordoba studied.

The Plaza de la Corredera (Corredera Square), one of the most popular in the city, is located in this neighborhood. It dates from the seventeenth century and has a Castilian style with little Andalusian influence. Today, it houses many bars, cafes, shops and businesses so it is very lively. 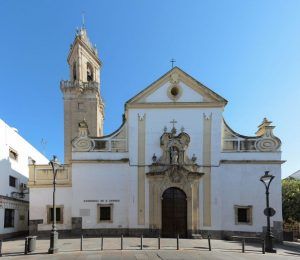 This neighborhood is characterized by its small size and few inhabitants. The main axis is again its church, which was a former 14th century convent in the Gothic style.

This courtyard used to have many orchards attached to the houses, but today none remain. It still has some traditional courtyards that can be visited during the month of May. 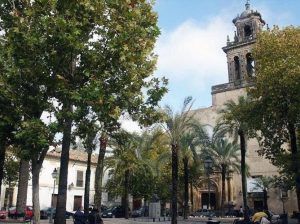 The city centre has one of the most admired squares in Cordoba, the Plaza de Capuchinos (Capuchinos Square). It owes its name to the convent that was founded there. In its centre is the crucified Christ giving the square a mysterious atmosphere.

Next to the square is the Cuesta del Bailio, through which a cross is erected to celebrate Las Cruces de Mayo. One of the most popular festivals in Cordoba.

The Roman Temple located next to the Town Hall is a reflection of the passage of the Romans through this city. The columns show that it was large and therefore very important. In addition, in the gardens of La Victoria, there is the Roman Mausoleum from the first century. It was discovered in 1993 being also also a sample of the Roman splendour in the city of Cordoba. 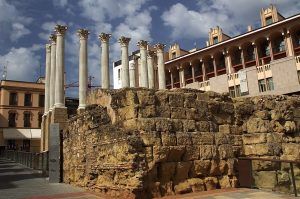