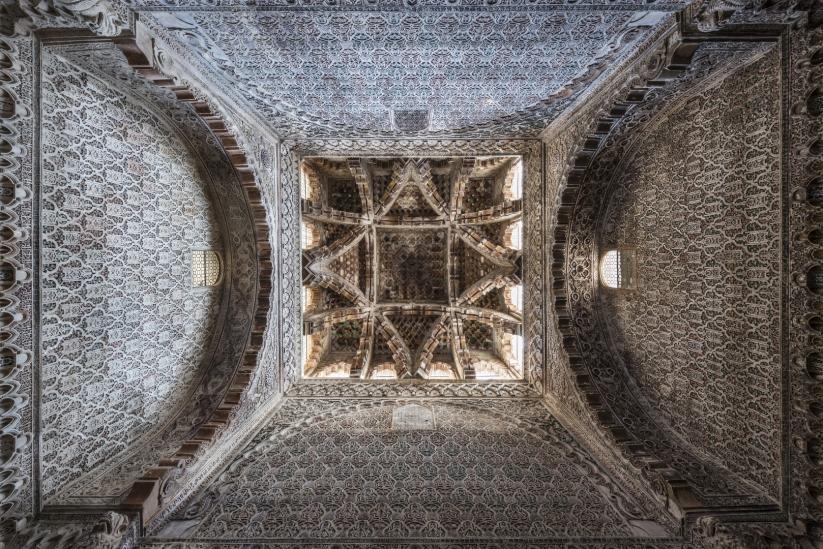 The Cathedral Mosque of Cordoba, a UNESCO World Heritage Site since 1984, has recently been chosen as the best place of tourist interest in Europe and the third in the world according to the travel website TripAdvisor, based on the comments left by tourists themselves. Our Mosque of Cordoba is only surpassed by the temple of Angkor Wat in Cambodia (first place on the list) and the Sheikh Zayed Mosque in Abu Dhabi (ranked second).

The history of Cordoba’s monumental complex is very long and full of anecdotes. That is why we have decided to briefly highlight 10 curiosities that we hope will be of interest to you:

1- The largest mosque in the world

2- It is not Mecca oriented

The mihrab is the niche or room in the center of the quibla wall that marks the direction in which to face during prayer. In the case of the Cordovan mosque, it was never oriented towards Mecca (hometown of the prophet) but follows the same northwest-southeast orientation of the Syrian mosques, for which Mecca is towards the south.

3- It was known as the Aljama Mosque

It was the aljama mosque, i.e. the main mosque, where the Friday noon prayer was to be held. In fact, the word “aljama” means “meeting” or “assembly” from which apparently comes the fact that Fridays for the Arabs is the “day of the meeting”.

4- The mosaics are the work of a great Byzantine master

The present mihrab was built during the reign of Caliph al-Hakam II and inaugurated in 965. The splendid arrangement of mosaics on its façade and on the dome that precedes it was the work of a great Byzantine master who came to Cordoba to carry out this impressive work.

5- From the 16th century on, it was known as “Asunción de Nuestra Señora” (Assumption of Our Lady).

From the 16th century onwards, the Cathedral of Cordoba, built inside the Muslim mosque, became known as the “Assumption of Our Lady” (it was previously known as “Santa María Madre de Dios”). There are numerous works that represent the Assumption of the Virgin, such as the upper central canvas of the main altarpiece, the dome of the main chapel or the dome of the choir.

6- The bell tower was built around the remains of Abd al-Rahman III from the 10th century.

The bell tower of the cathedral, a work of the late sixteenth century executed by Hernán Ruiz III, was built surrounding the remains of the primitive minaret of Abd al-Rahman III of the tenth century (in fact the remains of the minaret are visible inside). The tower was closed to the public during the 20 years of its restoration and was reopened in 2014.

The monumental complex of the Mosque-Cathedral of Cordoba houses three small museum spaces: the Visigothic Museum of San Vicente, the Cathedral Treasury and the Museum of San Clemente.

8- Our Lady of the Lanterns

The sculpture of the Cristo de los Faroles (Christ of the Lanterns) of the capital of Córdoba is well known. Well, on the outside of the north facade of the Patio de los Naranjos, there is an altarpiece from the early nineteenth century known as La Virgen de los Faroles that houses a copy of a painting by Julio Romero de Torres (the original is in the museum of this artist) representing the Assumption of the Virgin and is surrounded by eleven lanterns that magically illuminate it at night.

One of the best known stories of the monument that concerns us is the Column of the Holy Christ of the Captive or of the Nail, located between the chapels of the Rosary and the Epiphany. Legend has it that a Christian captive was able to scratch the hard marble of the column, which softened thanks to the strength of his faith, forming a cross. According to some written sources, Almanzor used the labor of Christian captives to build his enlargement of the mosque.

10- The Door of Forgiveness

The Door of Forgiveness (XIV century) is the most monumental of all those that give access to the Patio de los Naranjos. It receives its name, apparently, because from it the bishop dispensed forgiveness to those Christian faithful who had not been able to pay the tithe.