7 Most Beautiful Streets in Cordoba To speak of Andalusia is to speak of tangible and intangible heritage, culture and talent, fiestas and celebrations… All this has led to it being the fourth most visited Autonomous Community in Spain with 12 million visitors. There are countless reasons why it is the chosen destination, but one of them is the number of monuments that dot the Andalusian geography, the result of all the civilizations that chose this wonderful land to inhabit. It is not easy to name the best monuments in Andalusia, which is why we have chosen those that make up some of the 7 World Heritage Sites, which make Andalusia the most distinguished region of its kind, as well as others that you should not miss. Continue reading to immerse yourself in the eight treasures of Andalusia.

The Alhambra in Granada

The Alhambra is the most visited monument in Andalusia, symbol of the city and witness to the growth of Granada.

Built for defensive and military purposes by the last Muslims to settle in Spain (Nasrid period: 1232 – 1492), this building had a triple character: it functioned as a medina, alcazar and alcazaba.

Its rich interior decoration, the richly decorated rooms and the gardens as true oases contrast with the robustness of the exterior walls. The characteristic reddish colour of these walls gives it the name of “red or vermilion castle”.

Inside this complex you cannot miss the following places: The tower of the Candle, symbol of the Alhambra with its more than 25 meters high. The Mexuar, the oldest part of the Nasrid palaces, the Comares palace, epicentre of political power, the Patio de los Leones, stands out for the fountain of the twelve lions and the Palace of Carlos V, from the Renaissance period. All of them are part of the incredible Guided Tours Alhambra, you will end up dazzled by this place.

The Generalife and the Albaicín quarter complete the World Heritage designation. 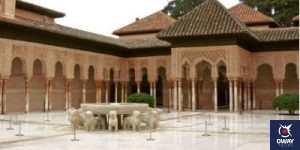 If the Alhambra is the most visited monument in Andalusia, the silver medal goes to this incredible building from the 8th century.

It was considered the second largest mosque in the world after Mecca and underwent a total of four extensions. Today we can enjoy the sea of horseshoe arches that form the old prayer room as well as the extensive Patio de los Naranjos (courtyard of the orange trees).

It was converted to Christianity in 1236, so the building prevailed as a cathedral. The arches contrast with the high white marble vaults of the cathedral nave, a combination of cultures that produce a unique result in the world.

Together with the Historical Centre of Cordoba, they form another World Heritage Site. Therefore, you cannot leave the city without visiting it, the best way for this is with the Guided Tours to the Mosque-Cathedral of Cordoba. 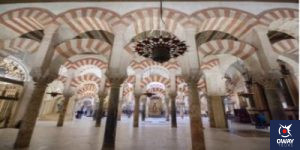 The Royal Alcazar of Seville

Seville is a city with innumerable places of interest, one of the most visited, reaching 2 million visitors annually, is the Royal Alcazar de Sevilla. It is open throughout the year, if you do not want to miss a detail of this tour, do it with the Guided Tour to the Alcazar of Seville, you will love the result. In order to know the primitive building you have to go back to the 11th century, the Almohads built it as a fort and different palaces joined it after the conquest of Seville by the Christian king Fernando III.

Among the most noteworthy corners of this fortified palace are the Lion’s Gate (Puerta del León), some of the more than ten courtyards that make up the patio de los Leones (of the Lions), the patio de las Doncellas (courtyard of the Maidens) or the Jardín del Estanque. There are also halls such as the Hall of Kings and the Hall of Ambassadors.

It has been a residence for many kings, including the current Bourbons who stay here when they visit the city of Seville. Together with the Cathedral of Seville and the Archives of the Indies, they form another of Andalusia’s World Heritage Sites. 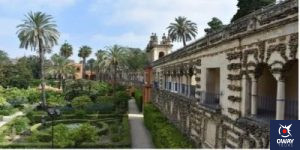 The Sacred Chapel of El Salvador in Úbeda

In the province of Jaén, two cities enjoy the distinction of World Heritage Site for the Monumental Complex that both make up, Úbeda and Baeza. One of the most outstanding buildings is the Sacred Chapel of El Salvador which, as its name indicates, was built by the desire of Francisco de los Cobos as a pantheon annexed to his palace. It was ordered to be built in 1536.

One of its most significant elements is the front, in Plateresque style, whose centre is the Transfiguration of Jesus on Mount Tabor.

Its interior also contains jewels such as the door of the sacristy. It surprises its realization in a corner, due to the complexity of this architectural solution. It could represent the Door of Eden.

This building is located in the Vázquez Molina Square, which brings together around it up to eight monuments, the most outstanding of which are the Marqués de Mancera Palace, the Church of Santa María de los Reales Alcázares, the Bishop’s Prison and the Vázquez de Molina Palace. 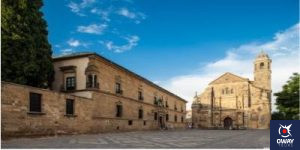 The imposing building of the citadel rises above the gaze of all the people of Malaga on the slopes of Mount Gibralfaro. It is the military architectural example par excellence with its double walled enclosure and is dated to the 11th century.

It is divided into two enclosures, the first of which is the Patio de Armas, which has now been converted into an Arab-style garden. The second enclosure, formed by the area of richly decorated palaces, features the Maldonado Tower from which a large part of the city can be seen.

Already in the 20th century it underwent a great restoration in which small pools appeared for the preparation of Garum, a kind of fish paste. As well as a dungeon and pieces of Roman walls.

Due to its military component, it is one of the best preserved fortifications in Spain, making it one of the most visited places in the city. Most people choose to discover this place independently, but if you think that the best way to discover it is in a group, we encourage you to take a look at the Málaga Guided Tours. Without moving from the province of Malaga, in the interior we find a city historically known for its bullfighting character. Ronda hides one of the most surprising engineering works in Andalusia and Spain, the so-called New Bridge.

It was built between 1751 and 1793 over the Tajo river and connects the historical area of Ronda with the modern one. Its construction lasted so many years due to the collapse only six years after the original bridge. In 1759 the works were resumed with an incredible result as we know it today.

Above the central arch we can see a small chamber that has been used several times over the centuries. It has served as a prison and even a torture chamber during the Civil War. It is the symbol of the city, so all the guides converge in this incredible enclave, the Monumental Guided Tours Ronda and Free Tour Ronda stop at the New Bridge, discover them. 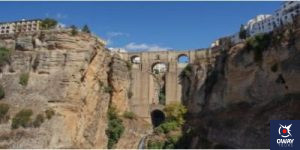 The first information we have about this citadel is from the year 955, when Abderraman III began its construction. It is formed by three enclosures, two of them from the Muslim period and another built by the Catholic Monarchs. It has been named a Site of Cultural Interest and Historical Heritage of Spain since 2004, with more than 300,000 visitors a year.

The first enclosure includes the military camp and the refuge of the population in case of enemy attack. Due to the earthquake of 1522 that destroyed a large part of this enclosure, we do not know what the original one looked like.

The second enclosure was made up of the residences of the rulers, so it was practically a palatial city.

The third and last enclosure is the castle. It is the most modern part of the complex, built by the Catholic Monarchs. The towers are the great protagonists of this enclosure, highlighting the Torre del Homenaje (Homage Tower) and the Torre de la Pólvora (Powder Tower). 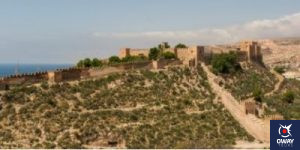 The monument that every year receives more visitors from the city of Cadiz is the Cathedral of Santa Cruz or New Cathedral as it is known. It was built in the 18th century on the site of the old Gothic cathedral of Alfonso X el Sabio, which was abandoned after being plundered by the Anglo-Dutch.

The cathedral reflects the mixture of styles due to the more than 100 years it took to be finished, among which the baroque style of its floor and interior, the rococo of its friezes or the neoclassical style of its facade and domes stand out.

It was named a Property of Cultural Interest in 1931 and can be seen from any part of the city, especially the famous yellow dome. The walk along the promenade provides a unique view of the contrast between the blue of the sea and the white of its walls. It is an obligatory stop when visiting the capital of Cádiz, as confirmed by the recommended Guided Tour of the Cádiz Cathedral, one of the most popular methods.

As Romero San Juan sang in one of his songs: “God made the world in six days, and on the seventh day he rested. And resting he dreamed that he lacked joy. And from the dream, and from the dream, he created Andalusia”.

The beauty of Andalusia cannot be summed up in one post, I leave it to you to discover the rest. 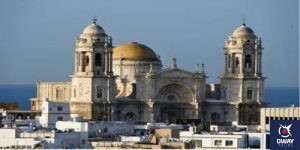