Tourist Bus of Ronda: Everything you need to know

The 5 Best Bike Hire in Malaga

The tourist bus of Ronda 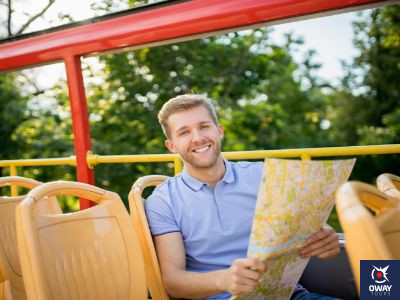 Ronda is a municipality belonging to the province of Malaga, in the autonomous community of Andalusia. It is located about 100 kilometres from the capital and its municipal district occupies the Ronda Depression, being surrounded by mountain ranges. This means that it contains landscapes worthy of visiting and photographing in order to always have a memory of them.

Apart from that, Ronda is well known for its Arab Baths, for its New and Old Bridge, the Houses of the Giant and the Moorish King, also, as an Andalusian city, it is famous for its great gastronomy.

So, without any doubt, we recommend to walk through each of its streets and corners in this minibus where you will know at the same time its history and all that this beautiful city hides.

The Ronda tourist bus starts its route at the Plaza de Toros of the city. There, before starting the tour, you can stop for breakfast inside the Bullring where there are several cafes. The best thing to do is to leave early, as this way you can see as much of Ronda as you want without worrying about running out of time or running late.

From the Plaza de Toros you can walk to the next stop, the Puente Nuevo (New Bridge). This bridge is the symbol of the city, and therefore the best known of the city for its incredible views of the cliff. It is around 100 metres high and is built with stones taken from the bottom of the Tagus River. It was built with the aim of linking the modern quarter with the old quarter of Ronda.

From the New Bridge, a 5 minutes walk will take you to the famous Jerez Restaurant which is known for its special gastronomy of Ronda.

Then, the tourist bus will take us to the Arab Baths, an emblematic place of Ronda as it includes many of the symbols that the Arab culture left in these lands in the past.

Afterwards, we recommend a visit to the Wine Museum of Ronda. This city is characterised by a long tradition of wine cultivation and production. You cannot leave Ronda without delighting your palate with this drink, which is offered along with various tapas in the museum.

Finally, to finish the bus tour of Ronda, the driver, before taking you back to the city from where he came, can take you to the most important gates of the city, the Almocabar and the Puerta de los Molinos.

In addition, if you have time left and want to continue knowing the magic that Ronda gives off, we suggest you to know the tour of monumental Ronda, where you will take a walk through the history of the city and its particular charm.

Main stops on the tourist bus.

Now we are going to comment the main stops of the tourist bus of Ronda:

-First of all, the Plaza de Toros, as Ronda is a city well known for its bullfighting tradition.

-Once there, just a few minutes walk away, you will reach the next stop: the Puente Nuevo (New Bridge). This bridge is one of the most characteristic attractions of Ronda, so it is highly recommended and almost obligatory to stop to see it, and take good pictures from its height.

Once there, we recommend a visit to the Interpretation Centre where you will be told about the importance of this work together with the natural, geological and historical environment that surrounds it.

-Then, being lunch time, we will start the third stop at the Jerez Restaurant, where they prepare delicious dishes of the gastronomy of Ronda.

Some of the specialities we suggest you try are gazpacho, puchero, migas and oxtail.

-After lunch, the driver will take you to the Arab Baths of Ronda, the best preserved in the whole Iberian Peninsula. You will be able to appreciate its magnificent rooms that exude peace and a relaxed atmosphere.

Who can refuse a relaxing bath that will make you forget all your worries?

-The last scheduled stop is the visit to the Wine Museum of Ronda. With this stop you will make a journey through the history of wine cultivation in this town, and you will also be able to taste wine and tapas during the visit.

You will also be able to see the Sangre de Ronda wine cellars, the aroma room, the fermentation room, the racking room, the wine containers and a typical Andalusian tavern.

The most striking feature of this museum is the fountain in the central courtyard. This fountain has four taps that pour wine instead of water, so all visitors are free to drink as much as they want. 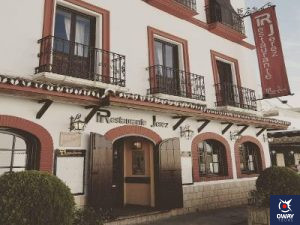 The visit to the New Bridge of Ronda and its surroundings is open from Monday to Friday from 10 am to 6 pm, and on Saturdays, Sundays and public holidays until 3 pm.

The general entrance fee is 2€, but if there are more than 10 people in the group, they will benefit from a half price discount. This discount is also available for children under 26 years of age and retired persons.

The tour is not suitable for disabled persons.

As for the Jerez Restaurant, it opens its doors at 12:00 noon until 4:00 pm. You can book your table online, by telephone or by email.

You can visit the interior of the Arab Baths of Ronda from Monday to Friday, from 10am to 6pm, and on Saturdays, Sundays and public holidays until 3pm.

It is accessible for people with disabilities.

Finally, if you want to visit the Ronda Wine Museum, you can choose between the different types of ethno-tourism available, from tasting young wines to an introductory course in wine tasting, for €5 and €40 respectively.

On the other hand, for an additional cost of €6, there will be a tasting of local sausages and cheeses.

Finally, it is worth mentioning that this city can be visited in different ways, among them the aforementioned or by booking one of the different tours in Ronda that exist. You won’t regret hiring them!