➤ When is the best time to visit Ronda? | OwayTours.com

What is the best time to visit Seville?

When is the best time to visit Malaga? 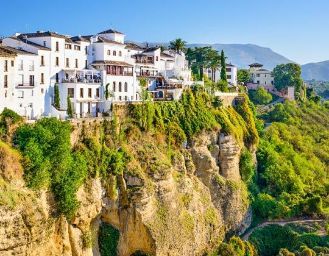 When you are planning a trip there are many factors to take into account to organize the dates. It can become a real hassle to search for everything, the hotels, the days, transport, activities, … So here we explain what are the best and worst times for you to go to enjoy Ronda.

As far as price is concerned, Ronda does not undergo too many changes between tourist seasons. From the whole province it is the most economical municipality to spend your holidays regardless of the season you decide to travel. Although there may be alterations depending on the variety of offers. The number of people who decide to visit the town also changes a lot. If you are one of those people who is overwhelmed by the crowded spaces or gets nervous when waiting for take a photo, it is better to avoid these seasons.

The high season is generally the months of July and August. The summers in Ronda are usually much milder than in the rest of Andalusia. The Mediterranean climate assures you of sunshine but the proximity of the mountains strongly mitigates the high temperatures that are reached in other cities like Seville. It is still recommended to take a bottle of water with you to keep you hydrated. It is also important to know that if you suffer from hypertension, or other such diseases, this type of climate can bring problems.

If you are dizzy is better not go on visits to the Roman bridge or to zip-line down the Tajo because the vacuum is so great that it can cause fading. In any case, the high season is not only concentrated in the summer time but also involves the holiday seasons related to Christmas and Easter. In the last weeks of December Ronda has an upsurge of travellers. Obviously the same happens during the last week of Lent. Ronda’s Holy Week is a holiday of National Tourist Interest. It is known since the 16th century although it is probably earlier. With the exception of Holy Tuesday and Holy Saturday, during the whole week there are up to fifteen parades with the participation of fourteen different brotherhoods.

The low season in Ronda dates back to spring and autumn. During these times in Ronda there can be very few people on the streets. Walking through its old town will be very easy for you because the climate is much more bearable and does not offer so many inconveniences. In spring and autumn the temperatures are more moderate and they favour to be able to walk along the municipality.

When we travel, one of the aspects we look at most is the climate of the place. If November and March are the worst months to go to Ronda it is precisely because of its weather. It must be taken into account that, contrary to popular belief, it rains more here than one thinks. Not for nothing is the spot with the most precipitation in Spain located in the Sierra de Grazalema, next to this locality. The Obradoiro’s square may be beautifully covered with rain. However walking soggy along the Tajo’s boulevard is not the ideal.

The problem is not only that you have to be prepared to avoid getting wet, but also that the weather can ruin your plans. Some of the routes can be dangerous if they are made wet. For example, you have to be careful on the itineraries along the Tajo or down to the Moorish King’s mines because you can slip. The rains are more abundant in November and March, although in general you should expect them throughout all the winter. Also during this season it is usually colder. So if you decide to visit Ronda don’t forget a pair of sweaters and a raincoat.

Obviously Ronda is a place worth visiting no matter what day of the year it is. Sometimes you can’t pick the days off and you have to make plans based on what you have. However if you have to choose our recommendation would be to organize the trip for September. It is better towards the end than at the beginning, as the temperatures are warmer and there are fewer tourists on the streets. Also if you like to enjoy good wine in Ronda there is a route related to this drink and a great tradition related to it.

During September the grape harvest is usually carried out and therefore it is ideal to visit the town during this period. Also in Ronda there are three fairs but only the one in September is declared of National Tourist Interest.  The months of April and May are also a very good option as the weather has not yet become very sticky. In the case of April we have to add the fact that it is celebrated the Holy Week.