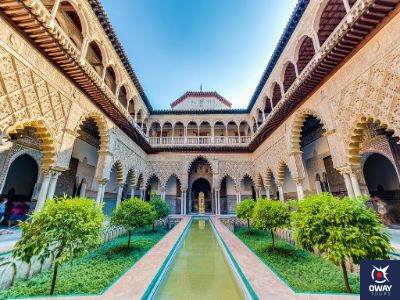 The Alcazar of Seville is a palace built in the late 11th century that remains almost intact today and serves as evidence of all the cultures that have passed through Seville. It is one of the oldest palaces in the world and walking through its many rooms and gardens makes the visitor travel to another era. Visiting the Alcazar is a must for anyone who wants to learn about the history of Seville and immerse themselves in it, thanks to the incredible fusion of architectural elements from different eras. If you are visiting Seville, you cannot miss our guided tours specially the one of the Alcazar and Cathedral  or one of our  Free Tours.

What is the Upper Palace or the Upper Royal Room?

The High Palace, or better known as the Upper Royal Room, has been the residence of Spanish monarchs such as Don Pedro I of Castilla, the Reyes Católicos, the Emperor Carlos V, Felipe II, Felipe V, Isabel II, Alfonso XII, Alfonso XIII and Don Juan Carlos I.

The real magic of this place is the mixture of Nasrid, Toledo Caliphate and Almohad architectural styles. This fusion transports us to the past, representing and superimposing all the periods and kings that have inhabited it; with more predominance of Mudejar and Renaissance art. 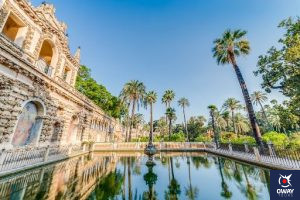 It is located on the upper floor of the Palace of King Don Pedro. The visit includes the following route: first you enter a lobby decorated with tapestries from the time of Felipe V and then you will find the oratory of Queen Isabel la Católica, a chapel of Renaissance tiles decorated with images of the Virgin, like the annunciation or the visitation to Isabel. Unfortunately, the Queen was never able to see it finished. After this, there is the winter bedroom, decorated with a coffered ceiling full of symbols of the Reyes Católicos.

On the other side, one enters the Gala Dining Room, the Billiard Room, presided over by a large game table overlooking the Ambassadors’ Hall and the Smoking Room. Then, the Room of the Infantas, with portraits of the daughters of Isabel II and finally a room where the collection of portraits of Isabel II is stored.

The stairs lead down to the Bedroom of Pedro I, where the decoration, tiles, plasterwork and floor are practically intact. After going through the upper gallery of the Patio de las Doncellas, one arrives at the Official Chamber of Pedro I, with privileged views of the Giralda, the Cathedral and the Patio de la Montería. Next to his room are the bedroom of Isabel II and the Official Office of the Kings. The visit concludes in the antechamber where King Pedro I made his visitors wait before being attended.

Reopening of the Upper Royal Room after 15 months closed

The Upper Royal Chamber opened last June 24, after more than 15 months closed because of the pandemic. It had to close to visitors in March 2020 when the state of alarm and confinement was decreed.

After the months of confinement, visits to the Alcazar were resumed in June 2020 with a safe itinerary to avoid infection by COVID-19. When the state of alarm was lifted on May 9, the rooms that guaranteed sanitary conditions were opened, such as the courtyards of the Admiral and Levíes or the Hall of Justice. Now the Upper Royal Room has been opened, although the Baths of Doña María or the Labyrinth of the gardens still remain.

Currently, visits have been reduced to meet the new health and safety measures. Groups must be a maximum of 12 people and there will only be 8 passes per day, from Monday to Sunday from 10:00 to 13:30. 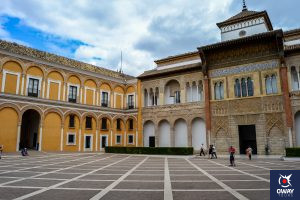 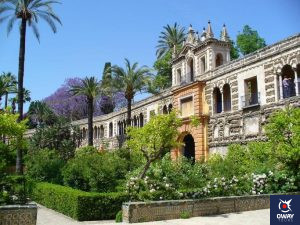 How to visit the Upper Royal Rooms of the Alcazar?

The visiting hours of the Alcazar are as follows:

General admission to the Alcazar costs 13.50 € and includes the visit to the first floor of the Palaces and Gardens of the Royal Alcazar, the Castle of San Jorge, the Antiquarium, the Triana Ceramics Museum and the Bellver-Casa Fabiola Museum.

The Upper Royal Room is the official residence of the Spanish Royal House when they visit Seville and is one of the oldest royal palaces in use in Europe. These rooms were usually occupied in winter, during the summer months it was more common for the kings to be installed on the first floor. A visit to the Upper Royal Room is essential to complete the visit to the Alcazar. It helps to understand the historical significance of the monument and its symbolic value nowadays.