The 4 best bike routes in Malaga

What to see and what to do in the Alpujarra 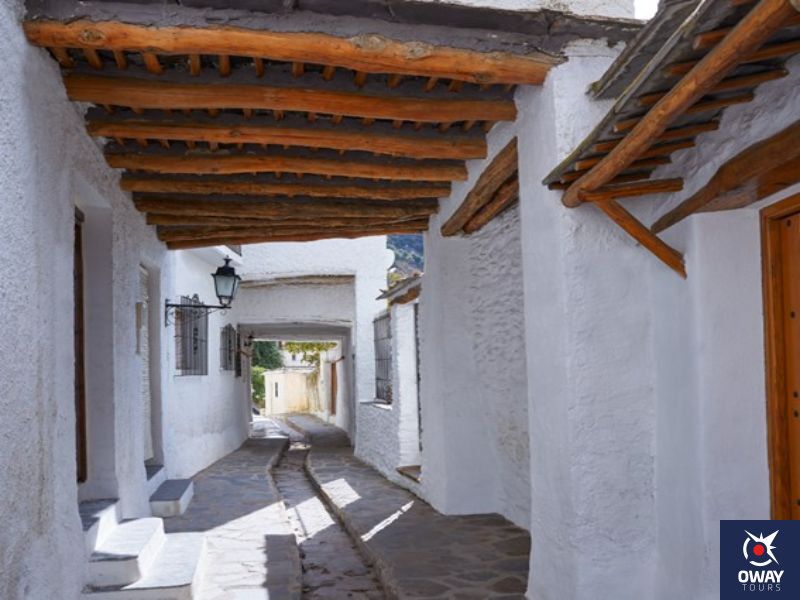 The Alpujarra Granadina, is a mountainous region, formed by impressive white villages and terraced houses in which today still survives the Berber origin.

This destination stands out for its nature in which the inhabitants have had to adapt to the conditions demanded by the geography. This place is a unique human landscape with villages clinging to the slopes of the mountains. It is formed by irrigation ditches that come and go and terraces of crops that turn the slopes into true orchards.

In this destination its villages are calm and quiet and carry out another rhythm of life and will help you to disconnect from everything. In these villages’ tourists seek inspiration and a refuge behind its twisting alleys.

The Alpujarra was inhabited by Romans and Visigoths and it was the Muslims who gave the villages of the Alpujarra their current aesthetics. This area was the last to be conquered and the last on the peninsula in which they were able to live.

What to see in the Alpujarra of Granada?

In 1492 the Kingdom of Granada renounced to the Catholic Monarchs. The Moors of Granada had to move to the other side of the foothills of the Sierra Nevada, far from the Alhambra. The last king had to settle in this land where his subjects later settled in dwellings on impossible slopes. These remained for almost 80 years. These people were expelled and only two families were able to remain in the region.

This is a story of the Middle Ages and later these lands enamored the romantic travelers of the XIX century. Therefore, it attracted dozens of poets and writers who found inspiration in the small white villages.

Enter this site and enjoy the most beautiful villages of the Alpujarra of Granada.

It is the village of witches because after the repopulation of Galician origin who settled here, the Galicians were the ones who brought the tradition of witchcraft. They brought their legends, customs, and pagan customs about meigas, aquelerres and rituals on dark nights.

Thanks to the neighboring villages, the legend grew through rumors. Currently, the villagers have been transforming the legends into a tourist attraction, where you can enjoy a theme park around witchcraft with caves, houses, fountains, and figures of witches.

In this village, as soon as we enter, we will be welcomed by a huge head of Baba Yaga and we can also find the Cueva del Ojo de la Bruja (Witch’s Eye Cave). 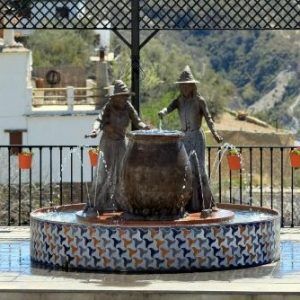 This village, together with two others, forms a triangle that has been declared a Historic-Artistic Site of the Poqueira Ravine.

These villages are perfectly aligned and are separated by a few kilometers. All three are perched on the mountainside.

Of these three villages, the first one you will reach is Pampaneira. It is made up of whitewashed streets and you can enjoy the traditional Alpujarran architecture. In this village we can observe the terraos which are flat roofs of the houses formed by chimneys in the shape of a four-eyed howitzer and its flat cap. You can also see the tinaos that are passages supported by beams.

In this town the craftsmanship is a tradition since it originated with the expulsion of the Moors. 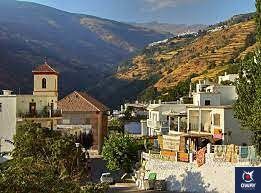 This village is located a few kilometers from Pampaneira and is the second most picturesque village of the baroque. This village is the least known of the three that form the triangle. It is a quiet village.

If you are looking for peace and relaxation, getting lost and disconnecting, this is the right village. It complies with the aesthetics of the Alpujarra village, and we can enjoy its narrow streets, chimneys with hats and the white of the houses. 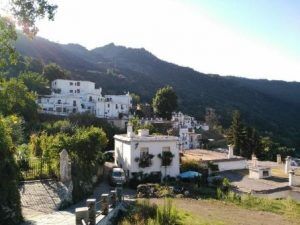 Almost arriving to the Mulhacén peak, we can find Capileira, another of the star villages of the Alpujarra.

This village is located at an altitude of 1436 meters, so it has great altitude. It stands out for its altitude not only of all the Alpujarra, but also of the Iberian Peninsula.

This village has become a base village for those seeking to reach the summits of Sierra Nevada. You can find different routes, which have various levels, and making this place an impressive area for hiking.

Capileira stands out for being another architectural wonder, and cannot miss terraced houses, balconies with flowers, the terraos and the tinaos.

Things to do in the Alpujarra of Granada.

In the white villages of the Alpujarra you can make many plans. You can go hiking or even visit the most outstanding sites of the village, you will not get bored. You can enjoy various viewpoints, emblematic streets or even museums.

In this town, from the moment you enter the enigma invades you. In this town stands out above all the Cueva del Ojo de la Bruja (Witch’s Eye Cave).

The manqueteros were men who were dedicated to stealing lard, for which they kidnapped the children. This fat served as a portion for every child to fly.

This cave stands out for its hollow shape and is characterized by the all-seeing Eye of the Great Witch. In addition, after seeing this cave next to it there is a bridge that is said to be enchanted. 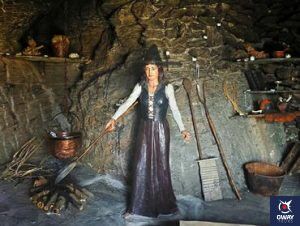 Fountain of the Witches and Mirador del Embrujo (viewpoint)

One of the most beautiful and surprising things in the village of Soportújar is the so-called Fuente de las Brujas (Fountain of the Witches).

Behind the fountain, we can find the famous Mirador del Embrujo in which they say it has a lot of magic, as it is a viewpoint that conquers you instantly, in which you will be totally surprised with its incredible views of the valley and nearby towns.

On the same side, we can also see the Town Hall which is decorated with a colorful dragonfly and a clock. In addition, it is also next door, the Church of Santa Maria la Mayor, the fountain of San Anton or the famous Time Capsule.

Getting lost in the narrow streets of Pampaneira

In this village you can discover all the attractions such as the Plaza de la Libertad or the Church of Santa Cruz. In addition, you can also visit the most picturesque street of the village which is called Calle Veronica. In Pampaneira you can also see the Fountain of San Antonio and the Paseo Garcia Lorca. From the Paseo Garcia Lorca you can enjoy the wonderful views of the village. You cannot miss in Pampaneira the Arab laundry and also you cannot leave without buying handicrafts or local food products. One of the best visits in this white village is the Bodega La Moralea and the classic chocolate factory Abuela Ili.

In the village of Bubión you can visit the Casa Alpujarreña Museum. This museum is in the Plaza Doctor Perez Ramon and is next to the church of the village.

Here you can discover what daily life was like in the past. What will surprise you most about this museum is that it is installed inside a traditional house with everyday objects that have been donated by the inhabitants of the village. 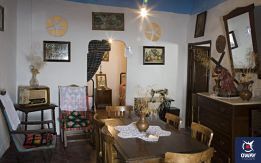 Discover the town center of Capileira

The town center of Capileira is one of the best things to visit in this village. This town has been preserved since ancient times and has a traditional Alpujarran architecture in which the town is divided into three distinct neighborhoods.

This urban area is formed by white houses with flat roofs that give shape to its steep and impressive streets. This hull is very well preserved because its inhabitants throughout history have had an incredible respect for their environment, making this town an ideal place to enjoy nature.

This town has an architectural richness for its simplicity and functionality which makes thousands of people from Spain and other destinations come to visit every year.

This route is formed by 12 fountains that the town of Capileira has. The Poqueira river rises from the thaws, so its waters run through the landscape and form the famous Poqueira ravine.

The water in this village is a very important element and makes the village develop more.

This route has a duration of 20-30 minutes and is one of those routes that cannot miss when making a trip through the Alpujarra.