What to see in the wonderful Alhambra? | OwayTours.com

The best places to have breakfast in Seville

The Best Guide to visit the Alhambra 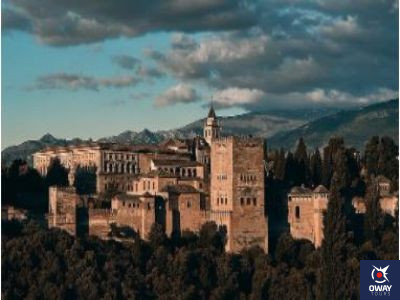 Everyone knows the historical importance of this monument of the city of Granada, a trace that in the Nazarite era was well impressed on the hill of the Sabika. Thanks to the conservation carried out by its substitutes, this work of art has reached our days unpolluted. Moreover, it is not only the masterpiece of Granada, but has become the symbol of all Andalusia and even of Spain. The stamp of the red walls of this Nasrid palace with the white skirts of the Sierra Nevada as a witness has gone around the world and has become the envy of everyone. Something that, fortunately, is kept in this small town in Andalusia and which we invite you to visit with our Granada Free Tour, an unrepeatable experience. Read on to find out more about this place and the main places that make it up.

Muhammad III was responsible for their construction on the site now occupied by the church of Santa Maria de la Alhambra. For this reason it is partially preserved and the scheme that follows is the same as others. Bañuelo is another example that is also in the city of Granada.

These baths were shared by both men and women but in different time zones. For them it was the only time of freedom and meeting.

Although this place is not one of the best known within the Alhambra, visiting it allows you to know better how their daily life was and the importance that these buildings had since it not only worked for hygiene, but it was a place of purification and meeting to chat about daily issues.

If you are passionate about religious art, you cannot leave the city without visiting the Cathedral of Granada, a magical place. For this, we offer the Guided Tours of Cathedral and Royal Chapel of Granada, the ideal opportunity. 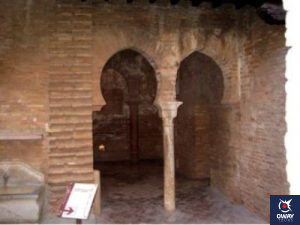 Muhammad III was also responsible for ordering the construction of this building, of which a portico, a large pond and the Tower of the Ladies remain. What makes it different from Comares and Los Leones is that it was incorporated into the Alhambra complex in the last century. It is also the oldest that remains standing of all those that we can visit in the Alhambra (14th century)

Above the Tower there is a small viewpoint characteristic of Nasrid architecture, from which you can see the Albaicín and Generalife districts, neighbourhoods that you cannot miss as they are another of the symbols of the city, the Guided tour of the Albaicín and Sacromonte will take you on a tour of the most beautiful streets of Granada..

As a curiosity, the interior ceiling of the Tower is in the Pergamon Museum in Berlin since it was dismantled by its owner at the beginning of the century. 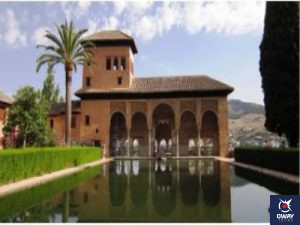 We are talking about the group of palaces that were built from the 13th century with the first founders of the dynasty up to the present day. Its walls contain all the ornamentation and adornments of this Hispano-Arabic period, one of the greatest vestiges of this period.

There are three palaces that form this complex: the Mexuar, the Comares Palace and the Palace of the Lions.

Mexuar was the audience for important cases and is also the most primitive room. Sultan sat between some lattices to be heard but not seen.

Comares Palace is divided into different rooms around the Arrayanes courtyard. Yusuf asked for his residence to leave the visitor speechless so the decoration of its interior was majestic.

Palace of the Lions is the pinnacle of Nasrid art. It was the private quarters of the royal family and the abstract decoration was left behind to give way to a more naturalistic style. 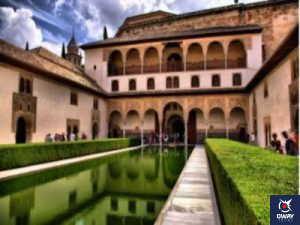 Continue to get to know every corner of this beautiful place through our website with just one click:

One of the most photographed images of the Alhambra in Granada is undoubtedly this courtyard, the undisputed protagonist of the palace of the same name. Its name comes from the twelve lions that form the fountain in the middle. A large cup rests on them.

It is worth noting the conservation of this with the complex mechanism it was composed of to keep the water like a sheet.

The rest of the patio is formed by a portico in the most Christian style, far from the conventional Arab patio. The decoration of the arches is based on ataurique and muqarnas. Over these arches rested the rooms of the sultan’s women and other rooms. In addition, these arches separate the courtyard from the Hall of the Abencerrajes and the Hall of the Two Sisters. 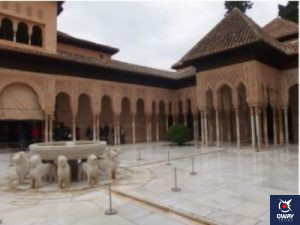 The emperor ordered the construction of this palace in order to be able to enjoy the wonders of the surroundings, while at the same time looking for a place to live since he wanted to move to Granada after his victories in America, although he showed his disagreement with the Arab palaces that did not provide the comfort he was looking for. The architect responsible was Pedro Machuca and construction began in 1527. The most outstanding features of this palace are its square floor plan and its circular courtyard. It is unique in its style and the most outstanding work of the Renaissance in Spain.

A central courtyard, which measures 30 metres in diameter, is surrounded by a large portico with Doric columns. In this portico, doors open to the palace’s rooms. 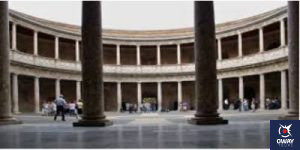 Origin of the name has several aspects but what is known for sure is that this space served as a place of recreation for the kings when they wanted to escape from the palace life.

It was built in the mid-13th century and is technically outside the palace city, despite its proximity.

A large number of modifications makes it difficult to imagine the original appearance of the Generalife, often due to the dilapidated state in which it was located.

The great difference with the Alhambra is the scant decoration on its walls. This is due to the intimate and peaceful nature of these rooms. It had no other purpose than to serve as a place of rest and disconnection.

In addition to the rooms, we find the Patio de la Acequia, the true heart of the Huertas del Generalife, where water becomes the protagonist along with the great variety of plants that this small oasis houses. 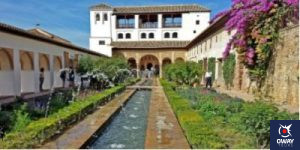 This is the oldest part of the Alhambra together with the Torre Bermejas, it is even believed that before the arrival of the Muslims in Granada there were already some buildings in this place.

First records of the Alcazaba date back to the 9th century, but it was Mohammed I who walled up the entire complex, erecting the three towers (Homenaje, de la Vela and Quebrada). In this way, he turned the place into a real fortification where he established the royal residence. From the reign of his son Mohammed II and with the construction of the different palaces, this place was left with a purely military purpose.

As with other parts of the Alhambra, it was abandoned for centuries until the restoration and renovation of the Alcazaba began in the 19th and 20th centuries. 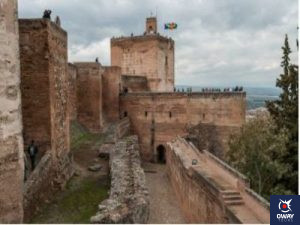