▷The Bird of San Pedro in Sevilla | OWAY Tours 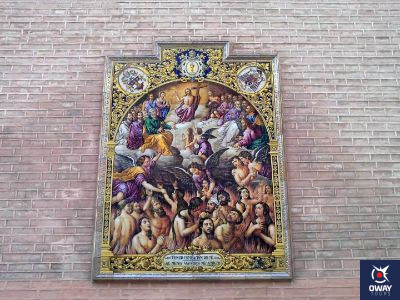 It is very common to see on the façades of churches ceramics dedicated to the souls in purgatory, the purpose of which was to ask for alms to free them. This peculiar ceramic can be found in the church of San Pedro, called “Las Ánimas del Purgatorio” (The Souls of Purgatory).

In it, among the saints surrounding Jesus, we can see the Virgin Mary and Saint John the Baptist on both sides. Closer to the visitor, we can see Saint Peter, the titular saint of this church, holding the keys to Heaven. Among the Souls in Purgatory, the presence of Popes, Bishops and some other monks is striking. In it the following is prayed:

“Have pity on me. At least you my friends”. 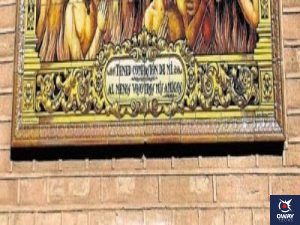 However, this tile created by Juan Oliver is known for another reason: a bird, which painted all his works. Therefore, it is a very popular tile in the city, due to the nice detail of having included a goldfinch among the decoration.

If you would like more information about the city of Seville, we recommend you to visit our Free Tour of Seville.

It was paid for by the Hermandad Sacramental de San Pedro, owner of the work where the famous bird is hidden, and by donations from the brothers and other members of the community. If you would like more information about the history of the city, we recommend our guided tour of the Alcázar and the Cathedral of Seville, where we will discuss this event in detail.

However, everything suggests that the Sevillian artist was inspired by another baroque painter of the city, Domingo Martinez (1688-1749), who created an excellent painting in the interior of the Parish Church of San Pedro, in its Chapel of Ánimas, back in the 18th century.

It is not easy to find the bird, so in 2008 a plaque was put up explaining the legend and giving a clue as to the location of the goldfinch, as well as the restoration of its lanterns, which illuminate it at night in Seville. 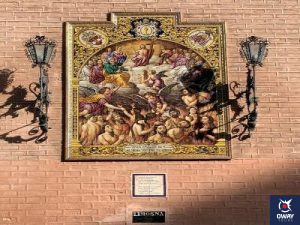 This tile hides a legend that has been passed down from generation to generation throughout the history of the city. According to this Sevillian legend, anyone who found the goldfinch on the tile, said a few prayers and deposited a donation in the alms slot would soon get married; and anyone who did not find it would never get married.

This arouses the curiosity of both national and international tourists who visit this site in search of the famous bird, hoping that the legend will be fulfilled in their lives.

Such is its magnitude, that the “Hermandad Sacramental de San Pedro” finds in it a source of income for its short budget.

If you wish to obtain more information about the churches of Seville, and in this way know more about their history and curiosities like this one, we recommend you to visit our Night Tour of Seville.

How to get to the Pájaro de San Pedro

This canvas is located in the centre of Seville; specifically on the façade of the Parish Church of San Pedro; in the Plaza Cristo de Burgos; which stands out for being one of the first Jewish quarters of the city after the Reconquest.

This square is one of the main and busiest routes from the Avenida de María Auxiliadora to the Plaza del Duque, in the “commercial heart” of the city. Also is near to the Sierpes street, the most famous and well known by all Sevillians and visitors to the city.

Very close to San Pedro is the Plaza de la Encarnación, where the well-known Mercado de Abastos is located.

This area also has the peculiarity of being next to one of the best ice-cream parlours in Seville; the Rayas Ice-cream parlour. So sitting in the Plaza de San Pedro while you savour one of these ice creams is a very popular plan for visitors who come to this characteristic enclave.

If you want to know more about other important places in this area, due to its proximity; we recommend you to visit our guide about Plaza Nueva in Seville.