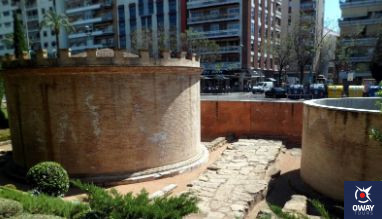 They are located in the Victory Gardens next to the place where, in Roman times, the western gate of the city was located. This was later known as the Gallegos Gate. Their location on both sides of the Roman road as a point of union of the city meant that from the time of the Republic they were situated on the right bank of the Guadalquivir. In this area we can find the Camino Viejo which covered one of the most important areas of burial in the city.

They date from around the second quarter of the 1st century AD and are one of the city’s most outstanding monuments in terms of funerary construction. If you would like to know more about its history, we invite you to take a trip back in time to enter the splendor of Roman Cordoba and the role played by these constructions.

History of the Funeral Monument of Puerta Gallegos

In the 1990s, several excavation campaigns were carried out. Thanks to them it was determined that it was during the time of Augustus that the first mausoleum was built, consisting of an area in which the body was laid out and, separated by a wall, a room in which it was cremated. It was this emperor who raised the mausoleum to the category of a monument, so that its existence in Cordoba was a reflection of the Roman capital.

At the time when Tiberius ruled, the process of monumentalization that had occurred previously reached its peak. It was then that two funeral monuments of equal dimensions but with different functions were built. The one located further north rises above a previous burial site, which leads us to believe that the recipient may have had family ties in both complexes. It maintains an individual character and is the one in the best state of conservation. However, the one situated to the south seems to be a collective burial. 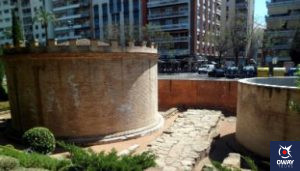 We observe a direct relationship with the Italic models, establishing parallels with Seville funerary specimens such as those found in Mérida or Carmona. These buildings seem to be related to one of the most important sectors of Roman society: the ordo equester. This gives them a privileged character that adds to their own location as they form part of the image of the city very close to the road. Given these characteristics, its importance within the Roman social framework in Cordoba is essential.

In the construction of these cylindrical structures we can see that traditional techniques in Roman architecture being used at the same time that new trends are incorporated, such as the use of cement and marble. Despite their importance, at the end of the 2nd century AD the funerary area was invaded with domestic and commercial buildings in the neighborhoods outside the city walls. Today you can appreciate and visit the mausoleums as their interior houses an interpretation center of the Roman Funeral World which we will explain below.

To learn more about other arrchaeological remains from the Cordoba of the Roman times you definitely can’t miss our guided tour to Medina Azahara,  monumental complex declared World’s Heritage Site by UNESCO in 2018. Don’t hesitate to count on the best guided tour for your visit to the wonderful city of Cordoba! Click on the button down below to learn more:

We must assume that, at that time, burial was an honor that every person except slaves should have. At the beginning of Roman civilization, the wealthy classes had the advantage of choosing their place of burial near the temples. This changed after the Emperor Vespasian introduced a regulation in order to improve the health of the city.  After it, everyone was obliged to place their resting place outside the walls of the town.

With this new regulation, the ritual began in the house of the deceased by having a wake for the body at the entrance of the house after having washed, perfumed and shrouded it. The following day a town crier announced the wake of the body for approximately one week with its corresponding accompanions. These were mourners (women who were paid to cry), music and chants. Despite this, we must remember that not all families had the same purchasing power so each burial was adapted to the family’s economic situation.

There were different resting places for the deceased, some of them were: the tomb in a box made of wood or stone; or the mausoleum, outlined in this article, which is much more magnificent. 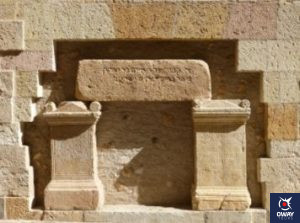 To conclude this article we would like to recommend you the following guided visits to the city of Cordoba. With these, you will be able to find about the mysterys and secrets of one of the most important times of this place. And what’s more, all of them guided by our best  experts: