The Weather in Cordoba: Temperature, Climate and When to Go | OWAY Tours

Recommendations for a weekend in Marbella

The weather in Córdoba 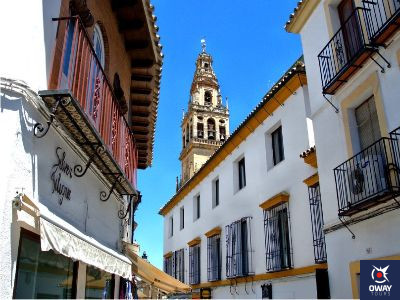 Most people who have not visited Andalusia much, think that the weather is always good in this autonomous region, but with this article we want to clarify that this is not the case.

Firstly, it is worth mentioning that Andalusia has the place with the highest rainfall throughout the year in the whole of Spain, the Sierra de Grazalema (Cadiz). And on the other hand, also as a point of interest, it has one of the highest peaks in Europe, located in Granada, more specifically in the Sierra Nevada, a natural park which is a ski and snowboard resort.

Having said this and to talk about warm temperatures as well, it is necessary to mention that Andalusia has among its provinces a desert in Almeria, and in general, in most of the autonomous community it tends to be warmer than cold, although it is never too much to have information such as the following to avoid any negative surprises.

What is the average climate in Cordoba?

Cordoba in the summer months reaches temperatures of around 40 degrees Celsius, so if you are not used to it you may find it a high temperature, although taking certain considerations into account you can enjoy the city.

The positive thing about this heat is that it is dry, being more bearable than in other provinces of Andalusia, for example in Malaga due to the existence of the sea, or in Seville because of the Guadalquivir river which, being larger than in the capital of Cordoba, influences the temperature.

Therefore, it can be said that most of the year in this city the weather is good.

Generally, in winter it is cold. Although there are days when the sun is out, with a jacket you can stroll down the street. Furthermore, although it may be hard to believe, it rains quite regularly in Cordoba during the winter months, so if you visit the city at that time, we recommend waterproof clothing and footwear.

The cold weather in Cordoba is not humid, so if you wear several layers of clothing, you will not have any problems.

Temperature in Cordoba in Summer.

In Cordoba summers tend to be long in terms of months. It is not only limited to the months of June, July and August, but the good weather starts to appear at the end of April and the beginning of May and lasts until September and even October.

As we have already mentioned, summer in Cordoba is a very hot season, reaching 40 degrees Celsius easily. For this reason, it is advisable to take measures so that people who want to visit the city during this time of the year can do so in the best way possible without having any problems due to the weather.

Among these measures we suggest:

To better withstand the heat in Cordoba, we recommend visiting the Jewish quarter of Cordoba where, due to the streets that run through it, the temperature is mild and pleasant, and the heat is less noticeable.

That said, if you visit Cordoba in summer, we recommend you to take our guided tour of the Mosque-Cathedral, so you can take the opportunity to see inside. 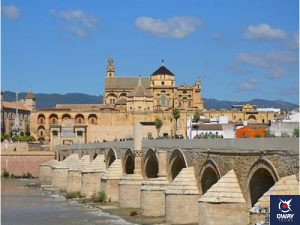 Temperature in Cordoba in Autumn.

Both autumn and spring are two seasons that, although they exist, are hardly noticeable in Cordoba. They tend to be characterised by more rainfall, and in autumn, a colder cold.

Even so, it is not a disadvantage for sightseeing as there are autumn days when the sun plays a fundamental role, and makes the temperature pleasant, although cold, for strolling through the streets of the city.

Temperature in Cordoba in winter.

Winter is a cold season, but compared to other cities it is not freezing cold. At night it usually cools down to temperatures of around 0ºC, even so, the cold that characterises the city of Cordoba does not usually make winters particularly cold.

In the capital of Cordoba, people don’t stop going out because of the cold weather, people still walk around every corner and even sit in terraces to have a drink, which acclimatise their customers with heating devices that make them spend a pleasant time without the cold.

Temperature in Cordoba in Spring.

It is the best season to discover the most hidden corners of Cordoba. It is neither bitterly cold nor stiflingly hot, so you can explore the city without worrying about the weather. Temperatures are mild and pleasant at any time of the day.

What’s more, this season coincides with the most important festivals in Cordoba, such as the courtyards, wine tasting and the May crosses, the perfect opportunity to experience them first-hand.

When to visit Cordoba?

Although, as we have already mentioned, it is possible to enjoy this great city at any time of the year, spring is the best season to visit it. In spring, temperatures are around 20ºC, which means it is sunny and you feel like going for a walk. Likewise, the days are longer and nature has a special essence that invites you to contemplate it. In addition, the capital of Cordoba is preparing for several of its festivals, so there is no better reason than this to get to know it in its entirety.

The only downside to this time of year is that as it is so attractive to tourists, it attracts a lot of visitors and you may have to endure more queues and crowds than usual.

If you want to avoid the crowds, then winter is the best time of year to visit as it is the least crowded. Winters in Cordoba are not particularly cold, so the weather will not be an inconvenience to discover it.

Whichever season you choose, once you visit Cordoba, we suggest you do not leave without taking a guided tour of the Alcazar of the Christian Monarchs  where you can appreciate the uniqueness of its landscapes. 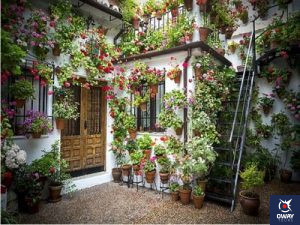 In addition to all of the above, and to make your visit to this city even more unforgettable, we recommend some of the best tours in Cordoba.

And if you still feel like a more free visit, we recommend the free tour in Cordoba.