Where to eat the Best Salmorejo in Cordoba | OWAY Tours

Where to eat Oxtail Stew in Cordoba?

Where to eat the best salmorejo in Cordoba 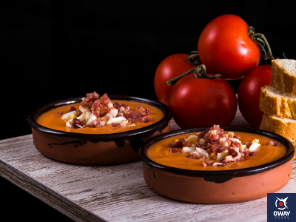 In your visit to the city you must try one of its most typical dishes: salmorejo. That is why from Oway Tours we propose you a list of the best places to taste it.

It is a cold soup, with the texture of a thick cream, which is eaten especially in spring and summer to combat the hot days. For its elaboration, the tomatoes are washed and cut. Introducing them in a blender to which bread is added (we recommend the Cordovan bread loaf, in the case that it is not available, use white wheat bread that you have had for one or two days) and a clove of garlic. Leaving the ingredients to rest for about ten minutes. Once beaten, the extra virgin olive oil is added, which is what achieves the ideal emulsion resulting in the characteristic creaminess of the dish. Once it acquires a uniform texture, it is decorated with strips of Iberian ham, hard-boiled egg and a few drops of olive oil. 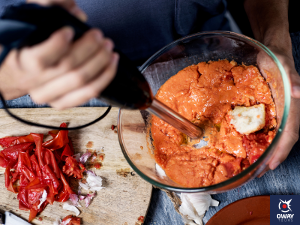 Bars where to enjoy a good salmorejo

Although it may seem a simple dish, the reality is that few reach the perfection and excellence of this majar of traditional Cordovan cuisine. Among the restaurants in the Caliphate city that stand out for the tasting of this dish we find:

In the street Velázquez Bosco, next to the mosque and next to one of the most beautiful enclaves of the city as is the “Calleja de las flores”. Is this tavern designed to be a space in which to enjoy wines and tapas from Cordoba.Given the location of the enclave, we recommend booking a guided tour of the Mosque for this day.

For less than four euros you can enjoy a bowl of salmorejo following the traditional recipe, although its menu also includes innovative combinations, made with products from the province, with the aim of attracting a young and dynamic public. 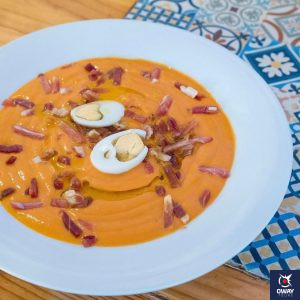 Located in the Victoria Market, it prepares both the traditional salmorejo and very original innovations of the recipe. Its chef, Juan Ruiz, has become a reference in its elaboration. It has been so successful that its products are distributed by supermarket chains such as Carrefour, offering 5 varieties of salmorejo. 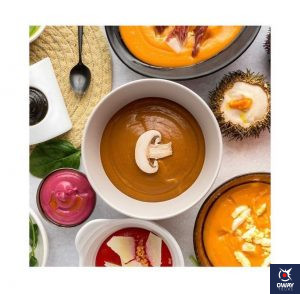 In the Almodovar gate, is this tavern that occupies a building of the late nineteenth century that has served on several occasions as a meeting point for famous personalities. It stands out for its generous portions and, among its most recommended dishes is the salmorejo with ham.

Since it is located in the vicinity of the Almodovar Gate, we recommend that, after enjoying lunch, you take the bus that stops at the traffic circle of the half moon next to the Red Cross to visit Media Azahara. 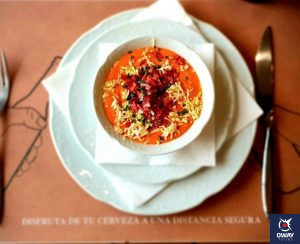 The corner of the Beatillas

It is located in the square of the same name, in the neighborhood of San Agustin. The personality of the place is defined by art, flamenco and bullfighting. It is one of the oldest taverns in Cordoba where the most typical architectural and decorative elements of the Andalusian culture are present, such as the Cordovan patio inside. 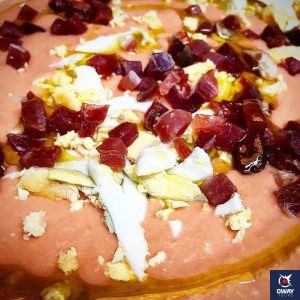 Founded in 1880 and located in the San Miguel square, the tavern has been linked to the bullfighting life, passing by its tables personalities such as Manolete. A curiosity is that in this house was created the Guerrita Club in 1896 being Julio Romero de Torres one of the customers who visited the establishment. It is an exceptional place in which to enjoy the typical gastronomy, including in the menu the salmorejo. 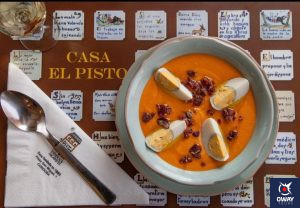 Since its beginnings in 1948 it has been an obligatory stop for the people of Cordoba and anyone who wants to enjoy quality cuisine. Its cuisine is characterized by a continuous search for renewal without forgetting the essence. From starters to desserts, including obviously a salmorejo of unparalleled texture as a symbol of the gastronomic tradition of Cordoba. 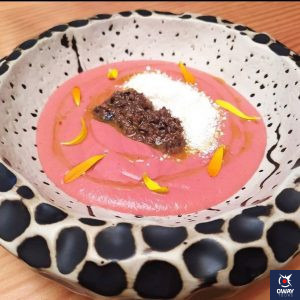 Located on the banks of the Guadalquivir River, from where you can see the Roman Bridge, its terrace is one of the best located in the city. The restaurant guarantees a gastronomic experience where national products are mixed with oriental products. Apart from the traditional recipe, they have elaborated a strawberry salmorejo with goat cheese and edamame.

Following the Ribera towards the mosque you will find one of the most visited monuments of the city and you can hire our service to visit the Alcazar de los Reyes Cristianos. 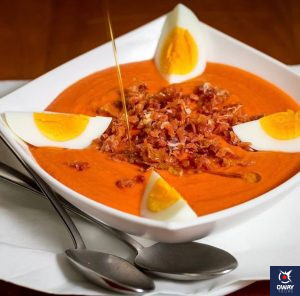