The Roman Bridge, one of the icons of Cordoba - Oway Tours

Curiosities and Hisotry about the Roman Bridge of Córdoba

The Roman Bridge, one of the icons of Cordoba 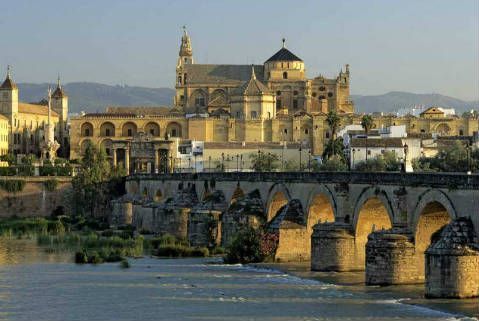 The Roman bridge of Cordoba is introduced as an ‘have-to’ in your visit to Cordoba. Also known like the old bridge, is located over the Guadalquivir river, and put together the ‘Campo de la Verdad’ neighborhood with the impressive Cathedral neighborhood.

With a base structure intact since its construction in 1st century AD, the panoramic of the bridge offers the views of the Mosque-Cathedral, the sparkles of Guadalquivir river and the arches of bridge itself.

A view that becomes magical at sunset time, where the oranges rays bounce off the stones, offering a unique picture to the visitor. Do you want to know some curiosities and the history about one of the oldest bridges in Spain? Today, in Oway Tours, we tell you everything, do not miss it!

A Little bit of history

Its construction dates in 1st century AD, during the roman domination. In his time, it was an engineering challenge and one of the most important constructions of the time that allowed access to the city. From the original structure few vestiges remain, and it was modified many times by the different civilizations that passed though Cordoba.

Its was especially reconstructed in the Arabic period when they incorporated the windmills that represented a milestone of construction in the West. Its purpose? To provide water to the luxurious Abderraman II gardens. These windmills also can be found in similar constructions in Siria or Egypt.

In addition, during this period the Calahorra tower was added to the south and at the north end the Bridge’s Gate. This gate is also called ‘arch of triumph’, even though its original history is not related with the celebration of any triumph, is just a simple entrance. Previously the bridge was accessible, but in 2006 it was cut out to traffic and it was made pedestrian. It is part of the old town and has been declared a Site of Cultural Interest in the monument category.

• It is located over the Guadalquivir river
• It puts together the Campo de la Verdad neighborhood and the Cathedral neighborhood
• The bridge’s gate at the north
• Defensive tower Calahorra at the south
• At the middle we can find the San Rafael statue, and since 1651 is always rounded by candles and flowers.
• It is located in a small nature reserve: Sotos de la Albolafia, which is home to more than 120 species of birds, some of them in danger of extinction
.

• 331 metres of length
• 9 metres of wide
• Today there’s 16 arches from the 17 original ones
• During more tan 20 centuries it was the only entrance to the city, till the construction of San Rafael bridge.
• It is made with stones
• It’s pedestrian
• Down the river is the San Rafael bridge
• Up the river is located the Miraflores bridge
• In 2014 it was used for recording a scene for the Game of Thrones. In the show this monument it was the famous Volantis bridge


As you can see, Córdoba never ceases to amaze and even something apparently simple, such as a bridge, contains curiosities and stories that are worth knowing, apart from the incredible views and the feeling of crossing one of the oldest bridges in Europe.