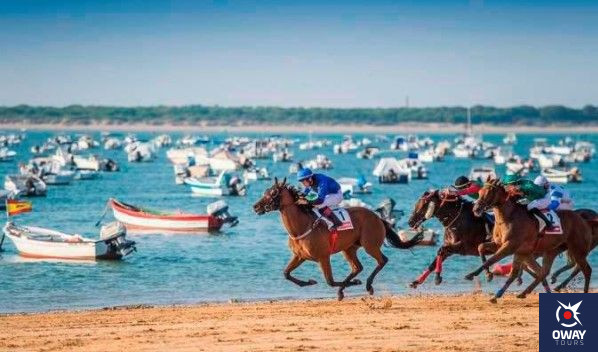 The Horse Races of Sanlúcar de Barrameda is one of the oldest official equestrian competitions in Spain. At the rate of knowing how to adapt to the new times, it has become one of the shows declared as one of the festivities of Andalusian, National and International Tourist Interest.

It is held in the town of Sanlúcar de Barrameda, so you can also enjoy the unique surroundings of the Doñana National Park, which complements a very attractive offer for both national and international tourists. Therefore, if you want to enjoy the best beaches in the city; this area is characterised by being one of the best beaches in Cadiz.

In the same way, you could enjoy the best typical gastronomic products of the area, which will take your palate to another level thanks to the renowned gastronomy of Cadiz.

History of the Races

Traditionally, he inherited that the origin of the Horse Races of Sanlúcar de Barrameda consisted of informal competitions held by dueling equine livestock. Firstly, it were used to transport fish from the old port of Bajo de Guía to the local markets and nearby towns.

The first “English-style” horse races held in Spain took place in 1835, on the “Alameda de Osuna” estate (Madrid). However, these “Carreras de Caballos de Sanlúcar” were the second oldest horse races to be regulated in Spain, and the oldest to be held in the country today.

Years later in which the Sociedad de Carreras de Caballos de Sanlúcar de Barrameda was solely responsible for holding the annual horse races on the beaches of this Andalusian town; this organisation would become part of the town council. Finally, heir includes them in its summer programmes because of the most attractive and unique festivity to offer to national and international tourists. 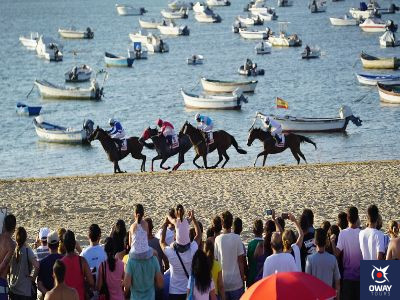 Nowadays, the Horse Races on the beaches of Sanlúcar enjoy a good reputation and stand out as one of the main summer events in Andalusia, having been declared a Festival of National Tourist Interest in 1986 and International in 1997.

What do these races consist of?

This is one of the equestrian competitions par excellence in our country, as it is one of the longest-running throughout history, which makes it one of the main events to enjoy during the summer in Cádiz.

These Horse Races are part of the National Circuit, along with those held in San Sebastian, Seville and Mijas, and are therefore subject to the rules governing official equestrian competitions. This means that hundreds of locals come to the beaches to enjoy the event. Click on the following link if you want to know more about the possible horse riding routes of Cádiz.

The races can be watched from the boxes or from the beach, where the spectacle is free of charge. Finally, at the finish line, it is a tradition to set up “betting booths” where visitors can bet on the horse they like best.

These horses are trained and kept at the Real Sociedad de Caballos de Sanlúcar de Barrameda. This is a social club with more than 500 members and more than 12,000 square metres of land. There are boxes with a capacity for a hundred horses, raid and show jumping teams, riding schools…

When are they held?

They are held in August every year and are one of the most unique sporting events in the world. Thanks to the fact that it takes place at sunset under the incredible sunsets at the mouth of the Guadalquivir River, it attracts thousands of visitors, who come to the beaches to enjoy the horses competing on the natural racecourse formed by the beach. 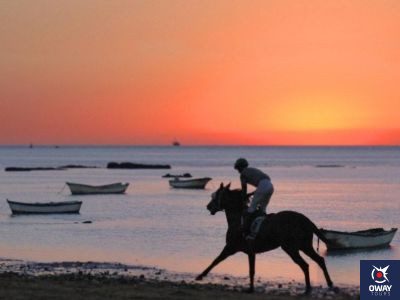 In addition, these races are held to coincide with the patron saint festivities of Sanlúcar de Barrameda, which are usually set in this event, with a parade of floats and carpets of flowers in the most popular streets of the town.

Curiosities about the Horse Races

Finally, if you want to enjoy this, among other events that take place in the city during the summer months, consult the guide what you can do in Cadiz.

At OwayTours we have the best tours in Cadiz. Follow the links for more information.