The 3 Best Sunsets in Granada 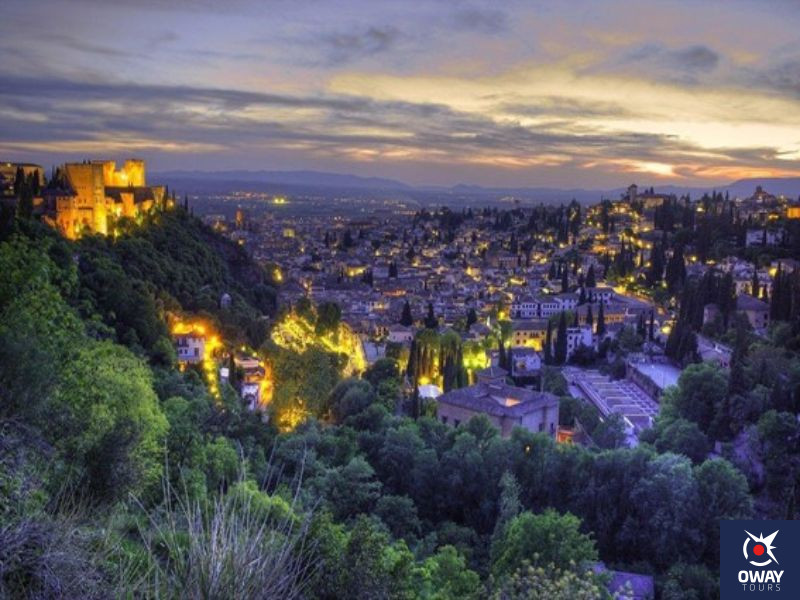 The city of Granada is one of the most valued tourist destinations in Andalusia. Spanish people and internationals are astounded by the charm of this land. Granada was the cradle of Moorish culture in Andalusia and home to the Catholic Monarchs, so its history is immense.

The city is situated between two hills: the monumental Alhambra and the ancient Moorish quarter of the Albaicín. Between them, the life of the city. If you are adventurous, Granada can be explored on foot. Its narrow streets capture the spirit of Granada: the smell of spices and leather in the Arab markets, the warm Andalusian breeze, the Mediterranean flavour of traditional tapas, the most beautiful sunsets… If you want to discover all these sensations, put on your most comfortable slippers and walk around the city!

The Alcazaba of the Alhambra

The Alhambra is the emblem of Granada. It is a colossal monument located on a rocky hill next to the river Darro. The military purpose for which it was created required that it be protected by the mountains and not be visible in the forest. However, this monument has not ceased to evolve over the centuries. It was also the residence of the Nasrid King Mohammed ibn Yusuf ben Nasr, who built the first palace and began to give the Alhambra the beauty it has today. This is multiplied at sunset. 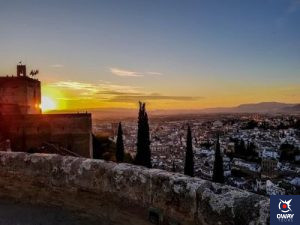 Despite being on a hill, it can be reached on foot, by bus or by car. It is perfectly communicated with the city centre so that in a few minutes walking we can reach it to contemplate the sunset. From the Alcazaba we will have the whole of Granada at our feet. Watching the sunset from there will evoke the feeling of being the king of the palace and will give us an idea of how it felt to manage the city from there. The sun going down behind the city creates an empowering atmosphere that will fill us with energy.

In the Darro valley, below the Alhambra hill and the Albaicín neighbourhood is the Paseo de los Tristes. It is a pleasant area for having a walk and having a drink in the sun, a route that is highly recommended by any Granadino. It is surrounded by all the charm of the city: bars, palaces, museums, churches, medieval buildings, spice stalls and so on. It is the perfect place to get into the culture of Granada. A perfect plan, for example, would be to sit on the edge of the valley and watch the sunset. From there we can see the effect that the evening sun creates on the reddish walls of the Alhambra. 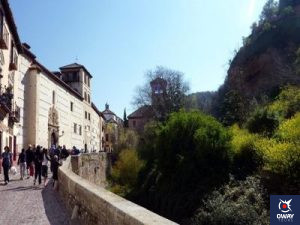 If you are visiting Granada for the first time or are unfamiliar with it, it is important to know that the Paseo de los Tristes does not appear as such on maps. Therefore, if we want to get there, we should ask someone in the area or look for Paseo del Padre Manjón, its official name. Paseo de los Tristes is a name that was coined later, a story that is worth listening to and that any person from Granada would be willing to tell.

Anyone who has visited Granada will say that the view point is one of the most beautiful places they have ever been. Located at the top of the Albaicín district, it has the best views of the city of Granada: the entire Alhambra in front of you, the centre of Granada at your feet and the Sierra Nevada mountains in the background. It is a recommended destination at any time of the year, especially in winter when the peaks of the Sierra Nevada are covered with snow. Sunset is one of the peak times of the day. Watching the sunset from this viewpoint is perhaps the best experience you will have in Granada. 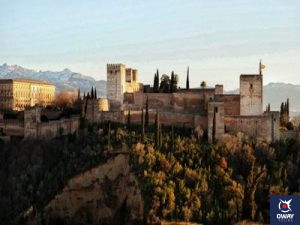 It is not only the people of Granada who proudly boast about this little piece of their land, even Bill Clinton, former president of the USA, said that it is the most beautiful sunset in the world. In addition, every day local flamenco singers will fill the place with art to the rhythm of bulerias. Who would not like to watch a sunset with the most Andalusian sound in the background? This is an experience not to be missed for anything in the world.

If you want to get to know Granada in more depth, here are some recommendations: