History of the Madrasa Palace

La Madraza was founded in 1349 and located in Oficios Street. It was the first University of Granada for theological and scientific studies. In this university were taught such illustrious characters as Ibn al-Khatib whose poems decorate the walls and fountains of the Alhambra. In addition, it is the only building that remains standing from the Nasrid Granada.

The meaning of madrasa is school or university and comes from an Arabic word. Its impressive library was burned by Cisneros in the Bib-Rambla square, so Ferdinand II of Aragon gave it to the City Hall. This has been transformed until it reached a baroque style in 1722. It is also known as the Old Town Hall. The State finally took it back in 1943.

Today it is the seat of the Royal Academy of Fine Arts Nuestra Señora de las Angustias. This seat belongs to the University of Granada. 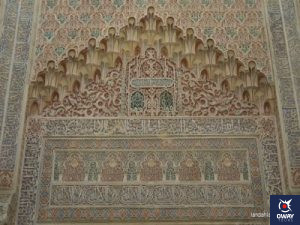 To visit the palace, there are different schedules, depending on the time of the year, that is to say, there are summer and winter schedules.

In the summer schedule, this palace can be visited every day of the week, that is, from Monday to Sunday from 10:00 to 20:00 without interruptions. As a recommendation a good time to visit the palace is just when it is going to open, at 10:00 in the morning, or from 19:00 because of the heat in summer, at this time the weather usually changes.

The entrance to this palace has a fee of 2 euros, therefore, everyone has to pay that amount to enter the palace, no matter if we go in a group, or individual or bring children. For this price, it is worth visiting the Madraza.

The ticket can be purchased online or you can even buy it there at the entrance of the palace. In addition, you can also book tickets to visit different events that take place in the palace such as visual art exhibitions or conferences. This is usually linked to important days such as 8M or history exhibitions. You can also book tickets to see groups of musicians, a good idea to enjoy an amazing place. So, if you are interested in coming to visit the palace, I recommend that you also book a show inside the palace for that day.

How to get to the Madrasa Palace

The palace is located in the historic center of Granada. Near the palace we can find the Plaza Bib Rambla, the Cathedral and opposite the Royal Chapel.

There are different ways to get to the Madraza Palace. The first one can be reached by city bus, through lines 4,8,11,21,23,C31,C32,C34 whose stop is Gran Vía/La Catedral or we can also access with lines C30,C35 whose stop is in Plaza Isabel Católica.

It can also be reached on foot, by Calle Oficios from the Cathedral of Granada, it is only a 4 minute walk.

If we are in the Plaza Isabel La Católica, the Palacio de la Madraza is only a two minute walk down Calle Estribo and Calle Reyes Católicos.

If you arrive in Granada by bus, to get to the palace, you have to take a city bus (line 33) to Gran Via, and from Gran Via, in a minute walk you reach the palace. 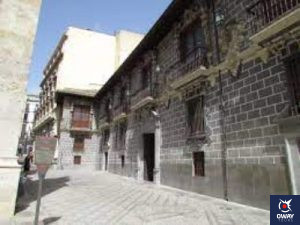 Curiosities about the Madrasa Palace

If you want to visit monuments of other times, in this palace you will know the Nasrid period, in which the oratory with a mihrab is preserved. The marble façade is still preserved in the Archaeological Museum of Granada.

Another curiosity is that today the facade is of baroque style and with emblems of the Catholic Monarchs. Not to forget, that the painting of the Virgin of the Rose, which had previously been in other places such as the Cathedral, is preserved.

You should also visit the palace’s Hall of Gentlemen of the XXIV century and enjoy the incredible Mudejar coffered ceiling.

At present, this palace is used as a cultural center or as the Rael Academy of Fine Arts. 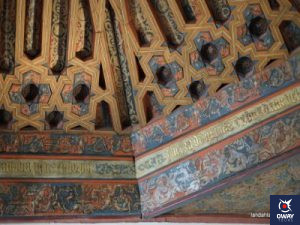