Malaga has always been characterized by being the capital of the sun and the square, the center of the Costa del Sol which receives millions of visitors every year and leaves the best taste in your mouth for a spectacular holiday. But does Malaga only offer this type of activity? The answer is a resounding no. Less than an hour’s drive from the city of Malaga we find an impressive natural setting. El Caminito del Rey (The trail of the King) has become one of the greatest attractions for outdoor sports lovers in recent decades. Join us to get to know this unique place in Spain in the best way possible through our guide to the Caminito del Rey. 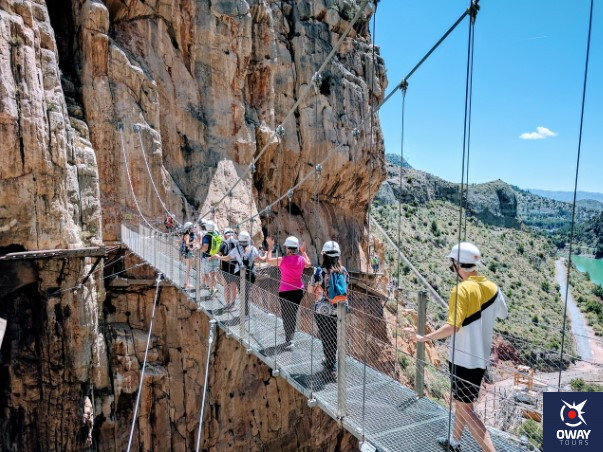 History of the Caminito del Rey

To know the history of the Caminito del Rey we must go back to the 20th century. At this time it was decided to open a channel from the reservoirs to El Chorro. The difference in level provided by the Guadalhorce could be used to create a hydroelectric power station. The most spectacular morphological aspect is the vertical stratification of the limestone that the river has been drilling through and which offers a cut.

The maintenance of this power station required some paths that were named “Los balconcitos” and later the current name: Caminito del Rey. It was named after Alfonso XIII, who inaugurated it in May 1921. Initially its function was only practical. To the maintenance of the place was added its use for communicating some locations.

This road between Gaitanejo and El Chorro became more popular and there were even houses in caves in the area where the canal begins. The Caminito was provided with electric light and you could cross it either by bicycle, foot or on horseback.

In 1999 and 2000, there were several fatal accidents that cost the lives of four hikers. After this, the Andalusian Government decided to close the accesses to the road, demolishing its initial section in order to prevent the passage of visitors and avoid further misfortunes. In addition, a fine of 6000 euros was imposed on anyone travelling along the Caminito del Rey or in the train tunnels.

It was so until it was rehabilitated in 2015 and opened in March of the same year. Today it has a purely tourist purpose, attracting many tourists. 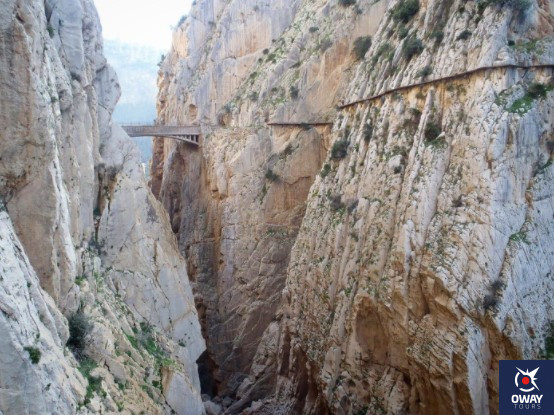 The Route of the Caminito del Rey Málaga

Starting from the gate section of one of the walkways to the other and counting the paths to get to and from the area, the time estimate is between 3 and 4 hours. From 2015, it is only possible to go one way, entering from the north area of the Ardales and leaving from the south, in Alora. 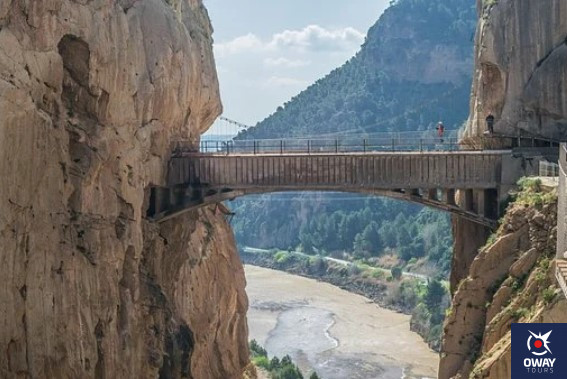 The route is made in a downward direction, so the effort is minimal and the time is shorter. As we have shown, the route is linear and not circular, so each person must be sure to return to the starting point.

The two ways to get to the official route are as follows:

Here you will find the remains of an old hydroelectric plant, the spillway of the Guadalteba Dam and what is left of what was once a cave house. When you reach the end, you will find yourself at river level. You will also see a large wall with a “taffoni”, a geological formation with a rounded excavation shape also known as the “Gothic Arch”.

This is the other option to reach the Reception Booth and you will be able to sense the relaxing sound of the water in the reservoir and see the “Gothic Arch“. You can also observe more geological formations of this type up close as you cross the great Tunnel and the Tafonis Bridge. This route takes approximately 30 minutes.

One of the main curiosities of this place is the connection that the railway has with the Caminito del Rey. Before the arrival of the high speed train, the Caminito del Rey was the only point accessible by train to Malaga from the interior of Andalusia. This was achieved through the tunnel excavated in the east wall of the gorge.

We are talking about one of the greatest works of engineering that we have the opportunity to observe when making the Camino. The tunnel is part of the railway line that connected Cordoba with Malaga, built in 1866. This is not the only one in the area. We can also see another one under the Sierra de Huma that was built relatively recently for the AVE (High Speed Train).

Another of the curiosities that we find in the Caminito is the presence of ammonites. These are marine fossils that could confirm that the Mediterranean sea arrived and covered all this place. It is not so, as this area was the sea bed. It was the mountains which emerged from below.

The name of Gaitanes comes from the carrion birds that were in this area. Some of them were the bearded vulture (now extinct) or the griffon vulture. The last dissected specimens belong to two bearded vultures of the Caminito and can be found in London.

Not only the fauna keeps one of the biggest secrets of this place. As for its flora, in one of the curves of the last of the canyons there is a century-old juniper tree that has been declared a true bonsai of nature because it grows super slowly. This is because when the Mediterranean withdrew, the juniper tree was trapped. In order to find another juniper tree in Andalusia you have to go to Doñana.

This fantastic place has been collected both in painting and on the big screen. From the work of some of Picasso’s masters like Enrique Simonet or Bernardo Ferrándiz. Some of these pieces of art are in the Museum of Malaga. Years later, he appeared in the cinema with Frank Sinatra and Rafaella Carrá in ‘Von Ryan’s Express’ or ‘The Horsemen’. 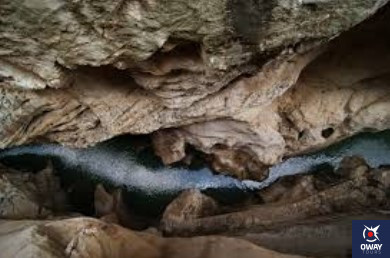 The Caminito del Rey has various opening hours depending on the time of year. It is closed on 1 January, 24, 25 and 31 December.

We must consider that if the weather is not good (rain or excessive wind) or if work or repairs are being carried out, the information media (the website) will enable this information. It is advisable to consult it often, especially in the morning. The El Caminito del Rey bus starts running at 8:45 in the morning in both directions. Its frequency is 15, 30 or 60 minutes respectively and the bus ticket costs 1.55 euros.

Autumn, mainly the months of September and October, is the best date to visit due to the mild temperatures and the low possibility of rain of that time. Summer months, however, are extremely hot but it can be counteracted with good protection. During spring you can observe some birds around their nests on the access paths to the Visitor’s Reception Hut and especially from the first canyon (El Gaitanejo). 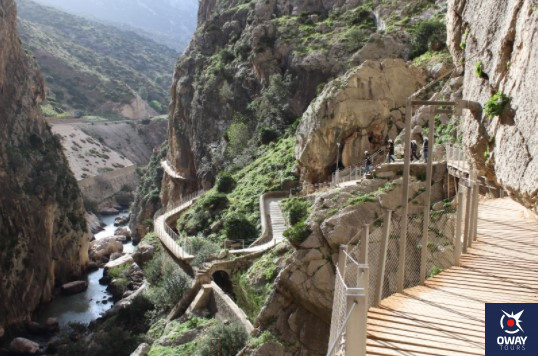 How To Get to the Caminito del Rey

You have the option of reaching the Caminito del Rey both by road and by train. RENFE offers daily trains that stop at El Chorro. You should check the timetables, prices and stations where they stop beforehand. If you choose to arrive by road:

In El Chorro, we find some services such as a train station, a shuttle bus stop that leads to one of the accesses of El Caminito, a tourist office and a Visitor Service Centre. On the other hand, there is a car park.

From the north in Casabermeja there are two ways to get there, about 40 minutes apart. The shorter route includes the AP-46 and the incorporation into the 45 motorway towards Antequera. If travelling by car is an essential part of your trip and you love to enjoy the views, we recommend another route. For this, continue from Casabermeja towards Villanueva del Torcal. You will find La Joya, Los Nogales and Las Lagunillas to the sides.