All the information about the Giralda of Seville | OWAY Tours

Seville was the administrative capital of Al-Andalus from the early days of the Almohad conquest, and remained so, except for a short period between 1162 and 1163 when Abd al-Mu’min ordered that Cordoba should once again become the seat of government. It was Abu Ya’qub Yusuf who ordered the re-establishment of the capital in Seville. It was from this moment on that multiple construction and reconstruction works were carried out in the city. The great mosque of Seville with its magnificent minaret was built.

The tower of the Cathedral occupies one of the highest points of the city, being its slender profile visible from practically all points of Seville, hardly any of the mountain ranges surrounding Seville, called the Santa Brígida hills, and the construction of the Torre Pelli, can be seen in its path. 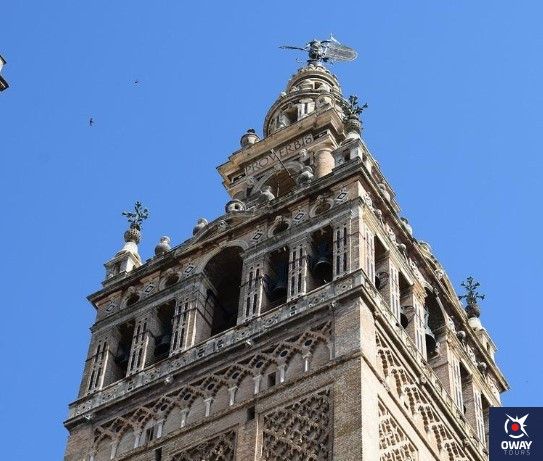 History of the Giralda of Seville

The first body of the tower of the Cathedral, began to be built in the year 1000 of the Christian Era as a minaret of the great mosque, and at the same time as an astronomical observatory, one of the first built by the Arabs after the one erected in Baghdad, in the same palace of the caliph. The work is due to the master builder Gever, Zuever or Hever, inventor of algebra. Greeks, Indians and Arabs were then outstanding for their knowledge of this science. The Arabs attributed that source of knowledge to the famous mathematician Mohamed Ben-Mura, who lived until the middle of the ninth century. The physical similarities with the minaret of Morocco are also structural, because the master builder erected both watchtowers. As for the Seville minaret, in its early days and until 1396, it only had the first body and above it a slender 14-metre high minaret that ended in a spire of brightly coloured tiles and four large golden spheres that were superimposed from top to bottom. Its foundations are 15 metres deep, and these were placed with stone bases that settled well in the clayey soil that bathes the city of Seville. Among these stones used, pieces of the disappeared Roman circus were found, whose entrance and main front existed at this point. With luck, we can find at the corner of the tower that faces the Episcopal Palace, two gravestones that by chance were spared from being hidden.

A strong hurricane, accompanied by the tremor of the earth, triggered the collapse of its axis, known as yamur, on August 24, 1396. 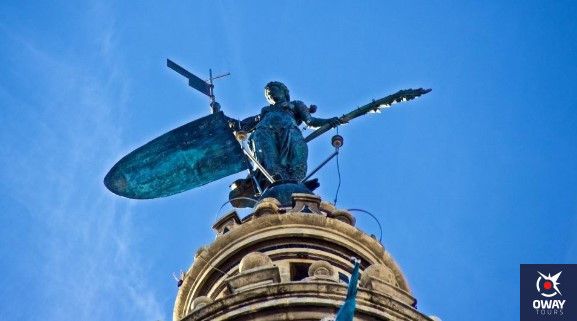 After the incident, the tower remained in its foundations but at the top there was a long golden jetty that was used as a weather vane until the 16th century with a wooden bell tower. In 1400 the first bell tower was replaced by a belfry anchored to four pillars holding a bell and the first public clock in Seville was installed. In 1504, a new earthquake with its epicentre in Carmona, made the tower to be watched again, which according to the legend, the fair saints of the city, Justa and Rufina, miraculously saved. Fernand Ruiz, a Christian architect, was then in charge of the work. He executed the upper bodies of the tower without diminishing the harmonic tone of the minaret. He took advantage of the interior square and solidified the large arches placed on the roof of the watchtower, raised four bodies above the primitive one that still remain, finishing his intervention in 1568. In the sixteenth century the current Christian body was added, the bell tower that tops the tower. Hernán Ruiz II was in charge of the construction and presented his model to the Town Hall. Following this body is the one of the Lilies by the four bronze jars that decorate its corners. On top of this, another body of Renaissance style, formed by the body of cannons, stars, dome and dome, until the top of the Faith.

In the cathedral archive, the weekly payments made to the masters who were part of the decoration of the Giralda are perfectly recorded. Although we have no record of this, the sculptor Juan Bautista Vázquez must have been in charge during these years. The decorative programme began in November 1566 and ended on 13 August 1568. There are 52 reliefs and the sculpture of the faith in the form of a weather vane, a whole ideological program made by Canon Francisco Pacheco. The renovation of the tower had been carried out within the context of the Counter-Reformation, therefore, all the decoration responds to the triumph of the Catholic faith.

Under the body of the bells there is a series of lion’s heads that act as gargoyles, those that clear the water from the rain. The allusion to the lion also has a biblical meaning, in this case the first letter of Peter that says “be sober and on your guard, your enemy the devil, like a roaring lion circles and seeks someone to devour, resisting them firm in the faith. In the body of bells we see the alternation of arches and lintels, but over the latter appear some oculi with cherub heads, based on Psalm 80:2 which says “you who sit on bright cherubim”. On the body of the well we find the Latin inscription from the eastern front and on the four faces of the tower: “Turris fortissima nomen domini, proverb 18”, which reads: very strong tower is in the name of the Lord upon whom the righteous shall lean. In this body, we also see male heads that personify the winds. The Apocalypse speaks of four angels in the four corners of the earth. They held back the wind with their breath. In the body of the star we find the passage from a square plant to a cylindrical one with 8 lintels, on which fantastic faces appear among others of great beauty, which seem to represent evil under the bronze sculpture of faith, known as the Giraldillo. The sculpture of faith, in line with this allusion to evil appears in Revelation 12, speaking of a woman appearing from the fighting firmament with a dragon.

Curiosities about the Giralda

There are many curiosities that we can find around this tower, although in order not to bore our reader, we will comment on those that are of greatest interest to us to create the complete vision of a unique monument that has managed to bring together the culture of different religions.

The story of the transfer of the sculpture of the faith, the weather vane, or the Giraldillo from its foundry in the Porvenir district is curious. 18 Moors from the city, on July 26th 1568, helped carry the sculpture from the artist’s house to the Cathedral.

The popular name of the weather vane that crowns the tower is “Giraldillo”, but the official name of the statue is “Faith Triumphant”, although it is also known by the vulgar dictates as “of the victory”, “Giraldillo” or “the Saint Joan and the Dummy”. The word Giralda comes from “girar”, and according to the RAE it means, tower vane that has a human or animal figure. The Giraldillo has remained because it turns on an axis driven by the winds, so that this sculpture has passed to the name of the tower, degenerated into Giralda. 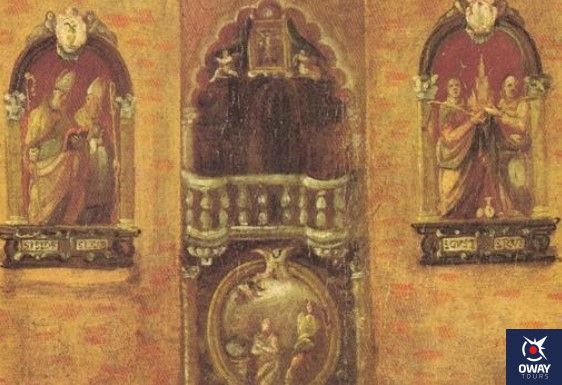 The interior of the tower has ramps that ascend to the body of windows of its top, are 35 ramps that were thought in order that the person in charge of calling to the prayer to the faithful could go up on horseback. After climbing, he would have the task of ringing the bells. At present, there are 24 bells in this body and it has an automatic system that makes them sound.

On the west side of the tower, it is certified what was a reality until the nineteenth century. What we knew from engravings and paintings has its reality that goes unnoticed before our eyes. The ochre-coloured remains that can be seen today are the remains of some murals and polychrome paintings that have completely disappeared but can be sensed on rainy days. They formed part of the iconographic programme designed by Francisco Pacheco, as the plaque under the first balcony on the north side explains. These paintings can be seen in the painting of the Saints Justa and Rufina by Miguel de Esquivel (1621). Nowadays all these frescos have been completely lost, being unrecoverable. However, there are still the two “machones” on either side of the first balcony of the tower, today empty, but where Saint Isidoro and Saint Leandro, and the Saints Justa and Rufina, respectively, were represented.