This is a building of great importance located in the upper area of Antequera, next to the Alcazaba, which makes it one of the most beautiful corners of the town and a must-see if you are visiting this city in the province of Malaga. It is considered to be the first Renaissance church in Andalusia, standing out for its proportions and the quality of its design.

To learn more about the churches and monuments that surround the city; from OWAY Tours we recommend you to do our Free Tour about Malaga; which will make you fall in love with the capital of the Costa del Sol.

In the Royal Collegiate Church of Santa María la Mayor there are both Gothic and Renaissance elements, which makes for a magnificent example of a mixture of styles that will transport you to another century. Its large façade, characteristic for being made of ashlar stone, reflects this church as one of the key pieces of Andalusian architecture. 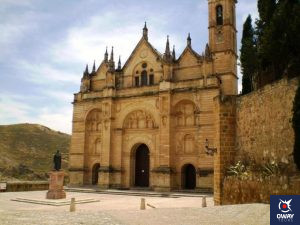 History of the Collegiate Church of Santa María la Mayor

The Collegiate Church was founded thanks to the initiative of Bishop Diego Ramírez de Villaescusa, who was in charge of the Diocese of Málaga, who, considering the large number of inhabitants that the city had reached, obtained in 1503 the opportunity to build the old Church of Santa María de la Esperanza. Eleven years later, the same bishop ordered the construction of a new collegiate church, which he called Santa María la Mayor.

It was built between 1514 and 1550 by the architect Pedro del Campo, which would result in a first attempt at Renaissance architecture at a time when Gothic still predominated, which is reflected in the pinnacles on its façade.

Around 1535, Pedro López also worked on it; at that time, Master Mayor of Malaga Cathedral, who divided the collegiate church into three naves, with a façade that corresponds in its composition to the structure of its interior plan; and Diego de Vergara, who was responsible for the layout of its Main Chapel.

This is one of the largest Renaissance buildings in the whole region, and has the particularity of combining Lombard and Gothic motifs, and elements of Renaissance style with others of Mudejar style. Stone ashlars from the old Roman “Singilia” were used in its construction, as in the Arco de los Gigantes (Arch of the Giants) at the entrance to the outer enclosure. 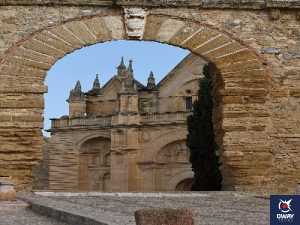 The Royal Collegiate Church of Santa María la Mayor can be visited free of charge, although we recommend that you take advantage of the joint visit offered together with the Alcazaba, which includes an audio guide that explains the visit didactically in several languages. In addition, inside this building, you can also see an audiovisual presentation that explains the history and construction of this church in a very entertaining way.

On the other hand, if you want to enjoy a visit to the Alcazaba of the city; from OWAY Tours we recommend you to take a look at our guide about the Alcazaba of Malaga; in order to inform you about its history and curiosities.

The Royal Collegiate Church of Santa María la Mayor is located in the old part of the town, in an old cobbled square (Plaza de San Sebastián), which can be reached by crossing the Arch of the Giants. It is located in a magnificent enclave, as it is easy to park and is also accessible by tourist train, although most people prefer to walk up from the centre of this town full of history.

If you would like more information about other walking tours in the province, OWAY Tours recommends that you take a look at our Guided Tour of the Caminito del Rey, where you can enjoy one of the most impressive walks in Europe.

To reach this wonderful enclave, if you go by car we recommend taking the A-45 motorway, as it is the fastest route; while, if you want to visit this town full of history by train, there is a wide range of trams offered by the company Alsa, which is reflected in the departure of trains from the capital of Malaga almost every hour of the day, with the first train at 8:45h and the last at 19:00 h; and having an estimated duration of 1h 30 min – 2 h approximately. 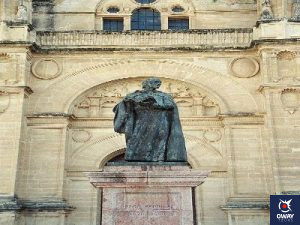