▷All Information about the Palace of the Countess of Lebrija

The Palace of the Countess of Lebrija in Seville

The palace of Lebrija, in Seville, is one of the best visits you can make if you pass through this province. This house is one of the best in the whole city, with archaeological remains of great value, such as amphorae, columns vessels, etc.. Loaded with mosaics and decorative elements such as arches, of Arab inspiration, and with a typically Andalusian facade and plant, represents the most characteristic of this region and is undoubtedly one of the great treasures that you can not miss.

History of The Palace of the Countess of Lebrija in Seville

In this palace you can find both Roman and Arab remains, however, the palace as such begins to be built as a manor house with the style of the fifteenth century. For this reason, the facade is a typical Sevillian style made in the same century. Later, between the eighteenth and twentieth centuries it was remodeled and expanded.

This palace passed through numerous famillies, which is why it has such a unique style, loaded with numerous influences. Originally this house belonged to the Paiba family, later it was owned by the Counts of Corbos and the Counts of Miraflores. In 1901 it became the property of María Regla Manjón y Mergelina, who was the Countess of Lebrija, to whom it owes its name. She was fond of archeology, and for this reason she restored it, so that this palace could house the valuable collection of antiquities and remains that it houses today.

Nowadays it can be visited and you can enjoy all the charms and treasures that this palace has to show you. As you stroll through its corridors, its central courtyard and all its rooms, this building will transport you to another era and you will travel through time as you learn about all the cultures that have left their mark on this place.

You can enjoy this Sevillian treasure from Tuesday to Sunday. It is open every day in the morning, from 10 am to 2 pm, but remember that you need a good time to see it all and quietly, at least 45 minutes. For this reason the last show is at 13:15.

Please note that Mondays are closed and tickets are limited, so book early. Also, Tuesdays are free at 10 am, but the capacity is limited and, on the other hand, you can only visit the first floor.

We recommend that you visit the entire museum, as it is a treasure. You can visit it by your own paying the entrance fee and simply wandering around the palace, touring its corners. You can also hire a guided tour, which is very useful if you want to learn about the history of everything in the palace.

The different parts of the palace

The palace has two floors and a central courtyard. All these rooms have something special and a hidden treasure. It is worth to walk through them all, to know well this palace and its stories and remains of past cultures.

In the main courtyard we find a mixture of styles, Andalusian, Plateresque and Arabic. It is surrounded by galleries and arches adorned with plasterwork. In addition, the entire courtyard is full of tiles and the arches are supported by spectacular marble columns.

Although this may be special enough in itself, the most valuable feature of this courtyard is undoubtedly the central mosaic. This Roman mosaic dates from the 2nd and 3rd centuries and depicts scenes from the love life of Zeus and the seasons of the year. It is surprisingly well preserved, hence its great value. 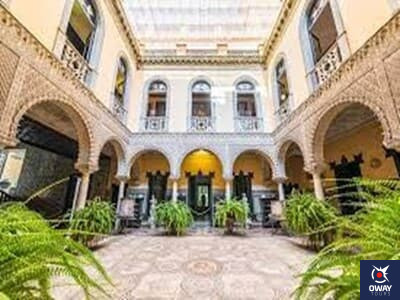 The ground floor is also loaded with treasures, both archaeological and pictorial. It is full of rooms of different sizes, almost all paved with mosaics of Roman origin. These rooms are full of remains such as busts, collections from the Visigothic period and even remains of Chinese and Persian origin.

All these remains are very spectacular and have a great value, however, like the courtyard, this silver stands out for the quantity and quality of the mosaics, which paved almost the entire floor. 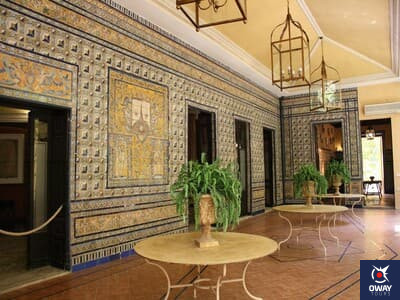 This room is completely different from the ground floor and shows another image of the palace, not that of a museum, but that of a building that was once the home of a person. 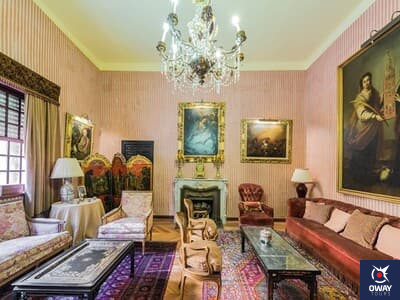 How to get to the Palace of the Countess of Lebrija in Seville.

The palace of the Countess of Lebrija is located in the very center of Seville. Located at Calle Cuna, 8, this palace is a hidden treasure among narrow alleys of the historic center.

Located between the Plaza del Salvador and the Campana area. You can take advantage, walk there and enjoy the walk through some of the oldest and most charming streets of Seville. If, on the other hand, you do not have time or do not feel like walking, there are many buses that stop at the Plaza del Duque or the Campana.

In addition to the buses, the Puerta Jerez metro is not far either, just 15 minutes away, and the walk from the stop, next to the cathedral, is well worth it. You can also opt for the streetcar, which runs through some of the pedestrian streets of the center, to Plaza Nueva, just 7 minutes from the Palace.

However you go, the palace will not leave you indifferent, nor the area around it, and there is little to say about the center of Seville, because words do not do it justice.

Curiosities about the Palace of the Countess of Lebrija in Seville