All the information about The Gold Tower of Seville | OWAY Tours

The Gold Tower of Seville

The Gold Tower of Seville is one of the most emblematic and characteristic elements of the city along with the Giralda, being one of the most photographed enclaves by tourists. Due to its location next to the Guadalquivir River and its shape, the Gold Tower is an element of great beauty and a must if you are in Seville. 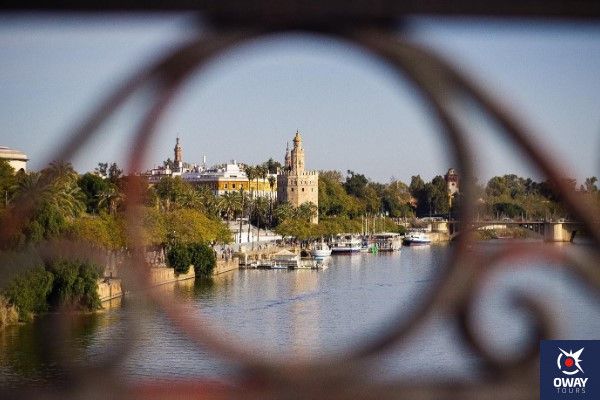 History of the Gold Tower

Its construction was carried out under the order of Governor Abu I-Ulà, and began in the year 1220, being completed the following year. This element was the one that culminated the construction of the defensive system of the Almohad city, and it meant the defense of the port, the most important point. Together with the Tower of La Plata, the Tower of Santo Tomás, and from there to the Alcazar, it formed a section of the wall that closed the passage to the Arenal, and this section in turn was part of the walls of Seville, which defended the Real Alcázar and the city as a whole.

It was called the Gold Tower since Almohad times, and has been named this way by Alfonso X in his narrative of the conquest of Seville. Its name is due to the shine produced by the lime and pressed straw mortar that was placed on it. In the 16th century its state was ruinous, so it was consolidated to improve its situation. Due to the 1755 Lisbon earthquake, the building was badly damaged, and the Marquis of Monte Real even proposed its demolition in order to widen the horse-drawn carriage ride and improve access to the Triana Bridge, but this was not done due to the opposition of the Seville people. 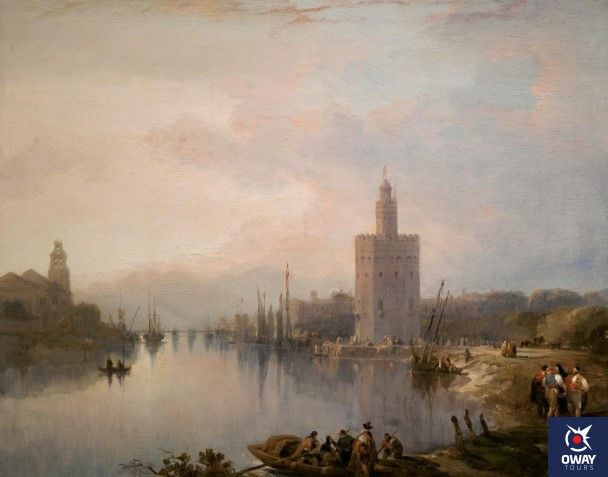 Parts of the Gold Tower

The Gold Tower is made up of three bodies: a first body, which was built between 1220 and 1221; the second body was ordered to be built in the 14th century, while the upper body was built in 1760, thus being an 18th century addition. It was built in mortar, and its angles and base were reinforced with ashlar. It has a polygonal floor plan with twelve sides, and inside the lower body there is another tower with a hexagonal floor plan, which stands out from the terrace and forms the second body. In this interior tower we find a staircase that gives access to the terrace. Overall, we can see that its structure is very similar to that used for the minarets of the mosques.

The building is about 37 m high from the level of the quay, and its three floors are formed by spaces of triangular and square shapes that alternate and are separated by pointed arches. Inside, the rooms are covered by brick groin vaults, and the staircase is covered by staggered semi-vaulted groin chambers. In the lower bodies, specifically in the terraces, we find prismatic battlements finished off with pyramid shapes. The first body, in turn, is topped by a small frieze with pairs of blind arches in the shape of a pointed horseshoe. The second body is built in brick, and its structure is narrower and lower than the lower one. The last body is of less interest, it was built by the military engineer Sebastian Van der Borcht, in brick and with a cylindrical structure. It was decorated with blind horseshoe arches and lobed arches with small hanging ornaments. It is finished off with a small semi-spherical dome with glazed tiles in yellow tones. 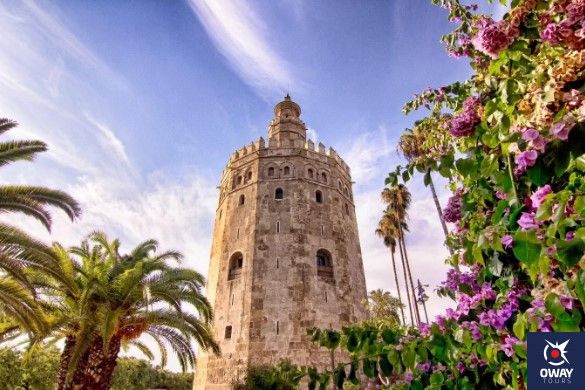 Timetable for visiting the Gold Tower

The hours to visit the Torre del Oro are currently Monday to Friday from 9:30 to 18:45 pm, and Saturday to Sunday from 10:30 to 18:45 pm. Its exact location is in Paseo de Cristóbal Colón, s/n. It is close to other places of great interest, so your visit can be complemented with that of the Maestranza Bullring, the Archivo de Indias, the Neighborhood of Santa Cruz, the Cathedral of Seville and the Charity Hospital. All these places are located between 300 and 500 m from the Gold Tower, and reaching them is very easy using public transport: if we travel by metro, we will take line L1. If we decide to use the bus instead we can find many lines that go to it: lines 3, 15, 31 and 21. 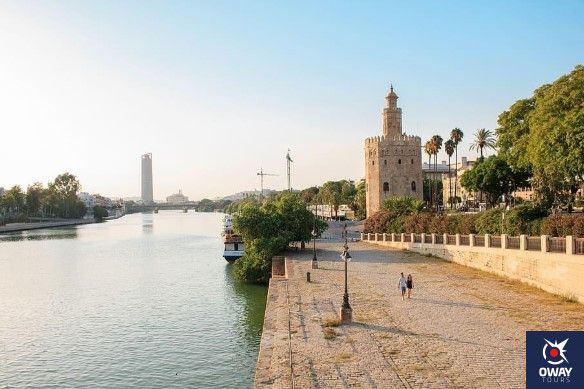 Prices to visit the Gold Tower

The prices to visit the Gold Tower are very affordable, being on Mondays the entrance completely free for all visitors. The rest of the days the price for adults is 3 euros, while for students and retirees the price is 1.5 euros. Children under 6 years old will not have to pay entrance in any case. 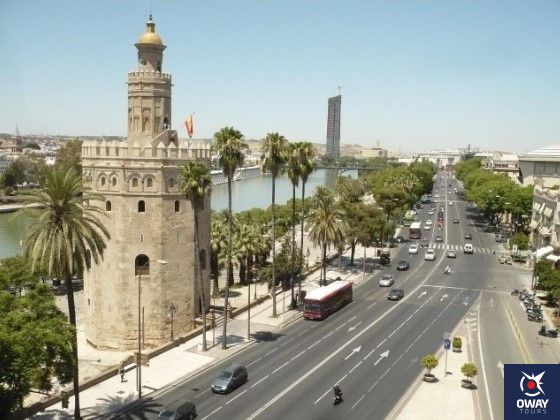 Curiosities about the Gold Tower of Seville

Today the Gold Tower houses a Naval Museum, which tells the naval history of Seville, highlighting the importance that the river had for the development of the city. The exhibitions are divided into two floors that deal with the history of the tower and the port. You will discover old navigation instruments, numerous models and historical documents. The most interesting part of the tower is the upper terrace, since from there we can have excellent panoramic views, both of the river and of a large part of the city.

There are numerous legends surrounding the Gold Tower, one of which tells that the tower did not only have a defensive function, but that it was a key place where the king had furtive encounters with the ladies he courted. Moreover, before it hosted the current Naval Museum, the tower has hosted numerous functions, including chapel and prison for members of the nobility. 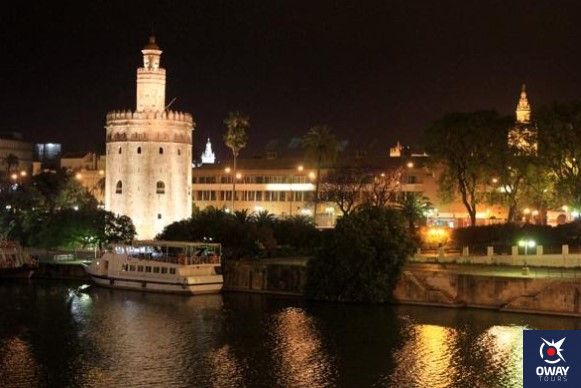