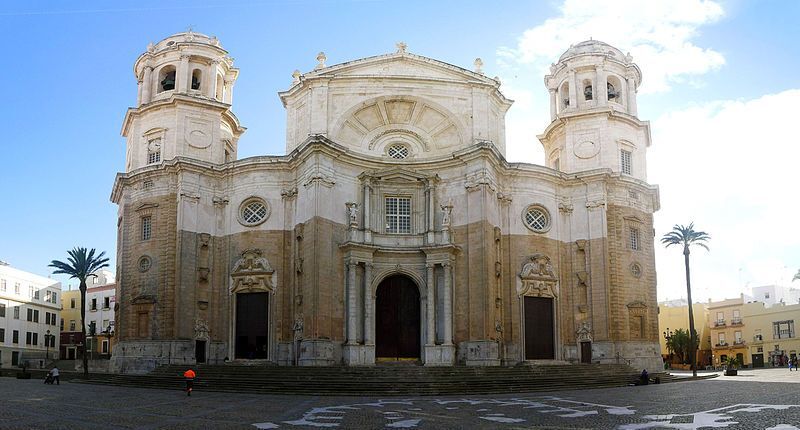 The Southwestern Spanish city of Cadiz is one of the oldest continuosly inhabited cities in Western Europe. It is a typically Andalusian city with a wealth of attractive views and well-preserved historical landmarks, among which the Cathedral stands up. If you are interested in visiting it, keep on reading: we are going to tell you everything you need to know about Cadiz Cathedral.

Cadiz Cathedral is an 18th-century architectural masterpiece that took more than a century to build. This landmark used to be known as ‘The Cathedral of The Americas’ because its construction was funded with money from the trade between Spain and America.

A bit of History

During the 18th century Cádiz became an incredibly prosperous city, and Santa Cruz, the other cathedral that the city already had, felt too small for such an important place. The new cathedral was built from 1722 to 1838 in line with the importance that Cadiz had acquired at the time. On the 3rd of May of 1722 the Bishop of Cadiz laid the foundation stone. The works would be extended for the next 116 years, which justifies the combination of the various architectural styles that it features, such as Baroque, Rococó and Neoclassical.

Vicente Acero, who had also built the Granada Cathedral, was the first person who designed the church, but he didn’t finish the project, being succeeded by several other architects. Due to this drawn-out period of construction, the cathedral underwent several major changes to its original design.

A mix of styles

As we mentioned before, though the cathedral was originally intended to be a baroque building, it ended up containing rococo elements too, and was finally completed in neoclassical style. Its entire perimeter is formed by 16 chapels. Especially impressive are the instrumental organs of the Cathedral, which were put into operation in 1870, and consist of 2400 tubes with 3 keyboards. In 1931 the building was declared ‘Bien de Interés Cultural’ (site of cultural interest).

Cadiz Cathedral boasts a wonderful crypt built in 1732, made of oyster stone. In this beautiful circular space that features a spectacular sound you can even hear and feel the waves of the sea. Some illustrious gaditanos were buried here, such as the great musician and composer Manuel de Falla.

Preapare to be impressed

The cathedral’s façade has an intriguing color palette of a dark brown lower half and a cream top. It is worth it to inspect the intricacies of this exceptional frontage, with rococo and neoclassical elements on a baroque base. A yellow dome tops the Cathedral.

As you enter through the Cathedral’s large central portal you will enjoy the serene and spacious setting of the tall nave, as well as the golden décor that seems to illuminate the interior. The domed ceiling’s large central painting of angels surrounded by The Last Supper, the Crucifixion and other works will amaze you. Also impressive is the wooden choir is carved with intricate figures.

The Torre de Poniente or ‘bell tower’ (‘torre del campanario’ in Spanish) offers great panoramic views of Cádiz, its port and the sea. You can also learn about the history of the Cathedral and the city with a guided tour of the adjacent Cathedral Museum.

The climb up to the Torre de Levante, also known as ‘the clock tower’ (‘torre del reloj’ in Spanishj) is also recommended, as the views are impressive too. It receives its nickname for the clock that was added in mid XIX. The tower is 56 meter high though visitors can only reach the first 40.

There is a fee to enter the Cathedral, the museum and the bell tower, that ranges from the 3€ for students and groups, to the 5€ of the general entrance. Kids up to 12 years old can access for free. An audio guide is provided.

The cathedral opens from morning until evening Monday through Saturday and from afternoon until late on Sunday. Times might vary slightly depending on the season, so better check first.