➤How to get around Malaga | OwayTours.com

5 Reasons to visit Granada in Autumn

The historic centre of Malaga is quite small and allows you to walk to almost any place of interest. However, if you have to go somewhere further away or just don’t want to walk, the city has buses, underground, taxis and tourist transport you can use to move around. If you want to know what the different options are for moving around Malaga, keep on reading!

*The prices indicated correspond to the ones established in 2020

Malaga’s metro is a fast, comfortable, modern and environmentally friendly way to move around Malaga. It consists of two lines both built in 2014, so it is new and works great.

A single metro ticket costs 1.35 euros. If you want to combine the use of the metro and the bus, you can use the Monedero Card. With it, the trip costs 0.82 euros on the metro line and 0.65 euros if you change buses. As it is transferable, it is the cheapest and most convenient option if you are travelling in a group or are going to make many journeys.

Both of Malaga’s metro lines operate every day between 6:30 and 23:00, although on Fridays and the eve of public holidays, the service is extended until 1:30 in the morning. Normally and during the day, the frequency of passage is between 7 and 10 minutes.

Line 1 of the metro goes from the extension of the university to quite close to the centre of Málaga with stops at Andalucía Tech, Paraninfo, El Cónsul, el Clínico, la Universidad, Ciudad de Justicia, Portada Alta, Carranque, Barbarela, la Uniónand El Perchel, which is the station in common with line 2.

On the other hand, Line 2, makes possible the transfer from the west zone of the city to the surroundings of the center. It has stations in the Palacio de Deportes, Puerta Blanca, La Luz- La Paz, El Torcal, Princesa – Huelin, La Isla and finally El Perchel. 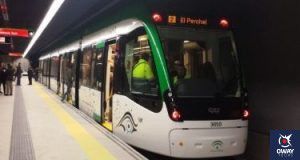 The city bus is a fast, cheap and effective way to get around Malaga.

A single bus ticket costs 1.30 euros. Another option is the Transbordo Card (Transfer Card), which allows 10 trips and costs 8.30 euros. It is transferable, facilitates transfers free of charge within an hour, and is valid for all urban bus lines except the airport. Tickets are bought directly from the bus driver, while cards can be purchased at tobacconists and newsagents.

The city bus service runs from 6:30 a.m. to 11:00 p.m., although the times and frequency vary depending on the line or time of day. In addition to this schedule, there are three night lines that operate from 11:30 p.m. to 6 a.m., approximately, every day of the week.

To travel to towns near Malaga, such as Torremolinos or Benalmadena, there are intercity buses that make daily trips.

Malaga city buses have routes to almost any point in the city with variable frequencies depending on the route and the day of the week. If you are going to take the bus, we recommend that you consult the maps either online or physically to know the names, destinations and stops of each line. 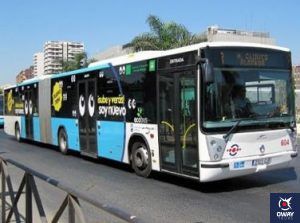 The price of a local ticket ranges from 1.80 to 2.70 euros. In the case of Medium Distance tickets or higher, the price will depend on the route, the service, the type of seat…

María-Zambrano Station opens at 5 a.m. and closes at 00:45 a.m., although the timetables of the different train services vary according to the route. Enter the Renfe website to see the timetables for the route you want to take.

From Malaga you can take trains to the towns of the province, to different cities in Andalusia and even to Madrid, Barcelona and Valencia.

For example, the suburban services have two lines: the C-1 and the C-2. The C-1 line travels along the Costa del Sol connecting the city with Fuengirola, Torremolinos and Benalmádena, facilitating access to all beach areas. The C-2 line, on the other hand, travels through the beautiful valley of the Guadalhorce River, connecting with Cártama, Pizarra and Álora. 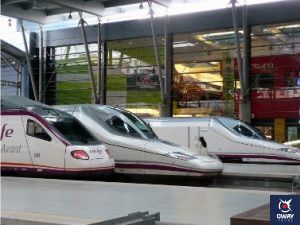 Taking a taxi is a fast and comfortable way to move around Malaga, as there are many and they have a very flexible service. They are distinguished by their white colour and by having the coat of arms of the city, a blue line and the licence number on the side.

Taxi fares are explained on posters placed inside the car and visible to the user. The prices are specified for minimum fare, lowering of flag, mileage and surcharges, such as night service, festive service, station or airport departure.

As it is such an important and touristic city, taxis work at any time of the day every day of the week. They can be stopped on the street when they have the green light and also at stops, which are usually located at busy points such as stations, central squares and the airport. There are also teletaxi services, through which the customer can request the vehicle by phone to pick him/her up wherever he/she wants. 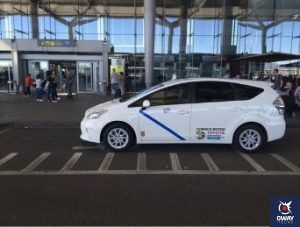 Although the historical centre of Málaga is mainly pedestrian, a different and comfortable way to get to know Málaga is with the tourist bus. They will take you to the main places of interest in the city and it will be a pleasant and fun journey in which the guides on board will tell you the history of Malaga.

The adult ticket for the tour bus costs 22 euros, children up to 15 years pay 10 euros and children under 5 years travel free. These tickets can be purchased up to 3 months in advance, online or at the office. In addition, you can also choose to buy a boat tour ticket for £12 or purchase the full package which allows you to take the bus tour and ride the boat.

The route of these buses has 14 stops, from the Vialia train station to Avenida Andalucía, passing through the main tourist sites: the port, the Centre Pompidou in Malaga, the Gibralfaro Castle…

The meeting point of the boat tour is the tour bus stop 6 at the Centre Pompidou and the tour will be a panoramic view of the bay of Malaga for one hour. It’s a great option to see the sun fall over Malaga, isn’t it?

The horse-drawn carriage ride will allow you to get to know the centre of Malaga in a special, traditional, Andalusian way.

Horse-drawn carriages are priced at £43 each way.

Horse-drawn carriages are available every day from 09.00 to 16.00, every hour, although if you have any special requests, please do not hesitate to write to them or inform the driver!

The driver will take you through Malaga Park, the Paseo de la Farola, the Paseo Marítimo, the Plaza de Toros and the Paseo de Reding, among other places, on a route lasting approximately 45 minutes. There are several stops around the Plaza de la Marina and Cortina del Muelle