➤ What to do in Seville at night? | OwayTours.com

The best gifts and souvenirs from Cordoba

Routes, visits and experiences in Malaga at night

Routes, visits and experiences in Seville at night

Seville is the capital of Andalusia and the fourth most populated city in Spain. This means it never sleeps. There are always plenty of activities, no matter what time you choose to go out. In fact, Seville at night is full of pleasant surprises. In addition, the Mediterranean climate is so warm between May and September that sometimes it is better to wait until you see the moon.

One of the best options is to wander the streets. As we just said the summer in Seville is too hot. That means that at certain times of the day you may not be able to walk around the town. Also, usually at night there are far fewer people which in a city so touristy is a very good thing. However, most of the historical sites are closed, so you can’t enter them. Still, the monuments are well lit and  they offer you different views of themselves. Seeing the dazzling Giralda in the sky or simply relaxing with a drink on the docks of the Guadalquivir makes it all worthwhile. 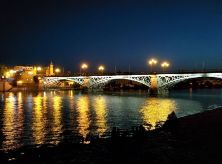 Exceptionally there are some places of interest that have events after nine. You have to be very careful because they are limited tickets, so you have to book in advance.

This building is Saint Isabel of Hungary royal academy of arts and the royal academy of language of Seville so it has a large amount of artworks. Like other houses, such as Dueñas, Pilatos or Mañara, this is a type of architecture that belongs to the elite. In consequence, they are extremely rich properties both inside and out. During the itinerary the history of the objects and the construction are explained by the voice of the inhabitants of the house.

The Charity Hospital by candlelight

The Baroque period is one of the most famous moments in the history of Seville. The Charity Hospital is an outstanding image of this past. This institution was administered by the brotherhood of the Holy Charity and its mission was to help the poor and the convicts. In Catholic regions, this type of foundations were very common during the modern ages. In Portugal they develop the Houses of Mercy. They alleviated the lack of public healthcare and also provided spiritual comfort for the underprivileged. The benefactors were guaranteed the ascension to heaven, so it was usual to give high donations. Therefore resources were also used to purchase artwork and other valuables. The itinerary explains the building but also the objects it contains, such as some paintings of Murillo.

Nights in the Royal Alcazar Gardens

This event only takes place in summer and consists of an extensive musical program in the gardens of the Alcazar. The idea is to have as many musical styles as possible to prove the hybrid nature of the building. The Alcazar is a royal residence from the high middle ages to today. For this reason, when the Spanish king stays in Seville, there is a part of the building closed. Given this circumstance, the construction of the Alcazar presents a great variety of architectural styles. We can see remains of the gothic, islamic, mudejar, renaissance, baroque or romantic past. In the architectural ensemble, the gardens are one of the most important and the oldest parts. Thus the concerts become a magical event.

You might want to stop with the cultural activities and take some time to relax. It doesn’t matter because Seville has multiple leisure options, some of them are complementary to the previous ones. Anyway, the following plans will show you a more human and local view of the city.

You cannot enjoy your trip if you are hungry and Seville is full of flavours. Aside from the restaurants, a good way to dinner is to go to a tapas bar. This is a typical way to eat in Spain that is based on a series of appetizers with a drink. It is not difficult to find tapas because they have become a tourist attraction. This type of food can be either the most traditional or a modern gastronomic fusion. You can relish this kind of dinner in old factories or markets that have now become gastronomic markets. They were businesses that lost customers or were even abandoned that reopened their doors to the tourism industry. In Seville there are several but the most interesting are the Lonja del Barranco, designed by Eiffel, or the Lonja de Triana, which still have the traditional trade in the morning.

One of the most iconic shows that can be enjoyed in Seville is flamenco. This is a musical style that mixes dance and song and is originating in Andalusia, Extremadura and Murcia. No one is quite sure where flamenco comes from or when we can start calling it by this name. As we know it today, it appears in the 18th century, although its roots are undoubtedly older. In any case, it is an extremely visual and highly recommended artistic demonstration. It is not very difficult to find restaurants that offer live performances, it all depends on the quality you are looking for and at what price. 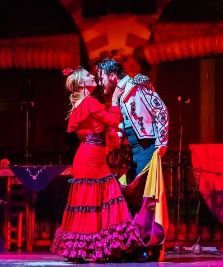 The University of Seville is one of the oldest in Europe and there are three other universities in the city. So there are a lot of young people, Spanish or foreign, and that means many alternatives for nightlife. It won’t be a problem to find places where you can dance until late at night. One of the most recommended areas is the Encarnación market, known as Las Setas. It is a contemporary architecture very different from the rest of the buildings in the historical area and it is certainly worth a visit. In the interior there are several discotheques and there is also a gastronomic market. If you want you can have dinner here and then continue until the sun comes back. If you prefer a more “quiet” plan, or at least more open, the best suggestion would be the Alameda de Hércules. It is common for large groups of young people to meet there, with a little luck, it is possible to find groups or bands that play live music. Even on a boring day, the area is full of life and establishments where drinks are served, with their respective terraces. It is important to emphasize that drinking alcohol on public roads is prohibited and can result in fines.