The 12 courtyards of the Viana Palace - Oway Tours

The charm of the streets and squares of Cordoba 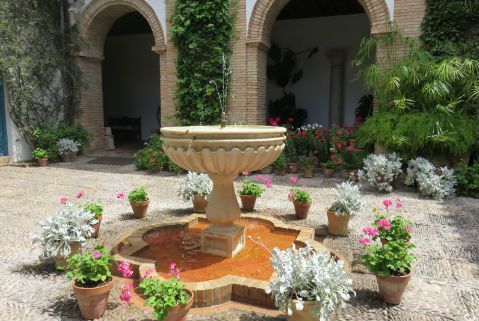 This 14th century palace is located in the heart of Cordoba. It is one of the most impressive visits to the capital. A palace made up of 12 courtyards, where each one has a unique personality.

Different species of flowers, tiles and fountains mark out each courtyard to turn them into a spectacle for the five senses. But not only that, the many rooms of the palace host numerous collections of paintings, crockery, mosaics, tapestries and even weapons, so it will not be difficult to imagine how the nobles of that time lived.

Today as a Palace-Museum, which has been open to the public since 2012. Therefore, if you are thinking of visiting Cordoba, we recommend that you note in your agenda the visit to this impressive place.

Do you want to know the 12 apostles of the Palacio de Viana? and some facts and curiosities? Today in Oway we tell you all about a site that has us fascinated... Shall we begin?

Viana Palace, a piece of history

Formerly known as Palacio de las Rejas de Don Gome, there is documentary evidence of its use since the fourteenth century. Throughout its history, the building has undergone various modifications and extensions, where nothing less than archaeological finds have been found, which points to the existence of a Roman building in the same place. It has passed through different hands -up to 18 nobles- until today it is owned by Cajasur.

Did you know...? The Palace has an area of 6,500 square meters and was declared a National Historic Artistic Monument in 1981 and a Historic Garden in 1983. Interior of Viana Palace.

To go through its interior is to travel to the past. Its rooms have been adapted to form a museum with collections distributed throughout the different rooms. Particularly noteworthy is the Tile Gallery with a floor paved with Roman mosaics. The Hall of the Arts has murals representing the five continents. Quite a spectacle to behold.

In addition, its library has more than 7,000 volumes and collections of Flemish and Goyesque tapestries, among other treasures.

Twelve courtyards, the twelve jewels of this impressive palace. The courtyard, heir to Roman and Arabic tradition, forms the cornerstone of this palace. Along its courtyards connected by galleries, you will recognize the history of Cordoba in a construction so representative that it even has its own festival. These cloisters are a living representation of five centuries of history, where the white walls serve as a canvas for the colour of the flowers and the rumour of the fountains.

Patio de Recibo An impressive courtyard that welcomes visitors with its Tuscan columns and serene vegetation.

De los Gatos Did you know it's the oldest neighborhood courtyard in Cordoba?

De los Naranjos Inheritance of the Arab tradition of the garden-garden. The orange trees are the result of the agricultural use of the gardens.

De las Rejas The only one looking outside of the ones in Viana.

De la Madama Cypresses and a mythological fountain are the ingredients of this unique - and romantic - courtyard.

De Columnas The newest and dates back to the '80s. It was built to host events in the palace.

De la Alberca The simplest and has a modest pool.

De la Capilla Main courtyard of the houses of the counts and houses a chapel.

It can be visited all year round, the full visit is eight euros, and if you just want to see the patios the entrance costs five euros. Where is it located? In Don Gome Square.