The 7 Most Beautiful Villages in Granada | OwayTours.com

The Best Guide to visit the Alhambra 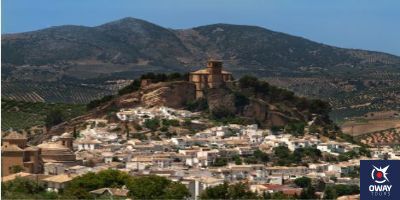 Granada is one of the most visited cities in Spain and the Alhambra has become one of the symbols of our country. This incredible monument is one of the stops of the Free Tour Granada and the highlight of the Guided Tours Alhambra.

Our list of villages to visit in Granada is headed by this town in the Loja region. It is considered to be one of the most beautiful villages not only in Spain, but one with the best views in the world and there are numerous monuments to be discovered among its narrow white streets.

One of the most recognizable places in Montefrio is the great rock on which we find its old Arab fortress and the church of the town. From the viewpoint you can enjoy unique views of the area.

Going down from the highest part of the village we go back into the historical centre to reach the church of La Encarnación. It is easily recognisable by the large round dome with no ornamentation that gives it a completely circular floor plan. This feature gives an unmistakable stamp to the wonderful postcards of this wonderful environment.

For nature lovers, we recommend you take the Arroyo de los Molinos path, a walk with waterfalls and even pools where you can take a bath. 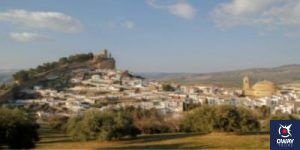 This time we are going to the Alpujarra of Granada to enter a village of white houses and streets that has an enviable location, in the middle of the Poqueira ravine.

Bubión stands out because of the ravine between green mountains in which it is located, adapting its contour to the nature of the environment. Despite being in such a mountainous environment, its orientation towards the Mediterranean Sea makes its temperatures even milder in winter.

Among the most outstanding places in the town we find the church of the Virgen del Rosario, the Casa Alpujarreña where you will learn about the life of these towns or the museum of agriculture. 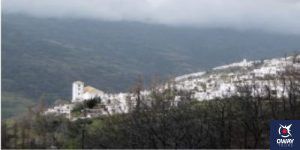 These two towns, together with Bubión, have been declared Historic Sites. They are located in Alpujarra and are the entrance to the Sierra Nevada Natural Park.

Capileira stands out for its whitewashed houses and monuments, mainly the parish church of Nuestra Señora de la Cabeza or the House-Museum of the writer Antonio Alarcón.

If you want to know more about Sierra Nevada, you can’t miss the Altas Cumbres del Parque interpretation centre, an incredible place to learn more about the area.

Pampaneira, on the other hand, is known for the great conservation of its Berber style houses. Some of the most beautiful places in this town are the Plaza de la Libertad or the Barrio Bajo. 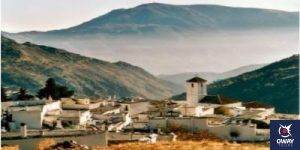 Lanjarón is considered the gateway to the Alpujarra of Granada and is well known for the high quality bottled water that is sold throughout Spain. It also has a spa that uses these thermal waters and is presented as the best option for all those who seek tranquility and disconnection.

Along the streets you can find many public drinking water fountains decorated with beautiful local tiles together with poems by Federico Garcia Lorca.

Moreover, the tourist offer goes beyond the relaxation of the spa, it offers some narrow streets that in spring show their best side, besides the ruins of the castle of Lanjarón, the church of the Encarnation from the 15th century with annexed chapels from the 18th century (chapel of the Souls and Sagrario). 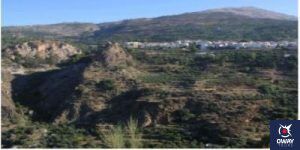 Granada offers all this and much more. An example of this is the Nasrid capital. Discover the rest on our website by clicking below:

Very close to the Sierra Nevada National Park is this small village in the Guadix region, which was once the capital of the estate of Don Rodrigo de Mendoza. La Calahorra is one of those villages taken from a film formed by a small rocky hill.

This town stands out for its rich historical heritage, easily appreciated in its imposing castle. This building was a pioneer in introducing the Renaissance style into civil architecture, resembling Italian palaces with an exterior shape typical of the late Middle Ages. Today it is privately owned.

Due to its proximity to the Sierra Nevada, this village serves as the entrance to the ski resort of Puerto de la Ragua. If you’re looking for a nearby ski spot, this is the place for you. 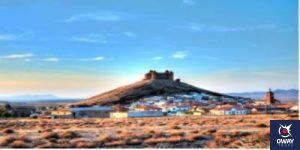 We travelled to the coast of Granada to meet this beautiful town. Although it sounds strange, Salobrena is not so much known for its beaches, which are still fantastic, but for its historic centre and its monuments.

The town is made up of winding streets that climb to the rocky summit where the Moorish castle is located. This is undoubtedly the greatest attraction of the area, it had defensive purposes and from here you can see some impressive panoramic views.

Other outstanding places in the centre are the church of Nuestra Señora del Rosario, a 16th century building on top of an old mosque and the church of San Juan Bautista. 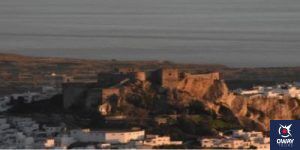 As its name indicates, this village is located in the region of Guadix, specifically in the Hoya de Guadix, a depressive area between mountains by two rivers: the Guadix and the Fardes.

The first thing that calls the attention of this area is the reddish colour of its land, as it is very rich in clay. This makes it an ideal place for trekking and enjoying the incredible nature.

Its greatest historical exponent are its cave houses, a must for anyone visiting the town, as well as its historical centre. The hermitage of San Torcuato or the church of Nuestra Señora del Carmen are some examples of Benalúa’s religious architecture.

The Cueva del Centro (Cave of the Centre) is presented as a museum where the origin of these clay caves is exposed in a dive during the Second Republic.

In addition, the proximity to the city of Guadix makes this town the best option for a rural getaway. 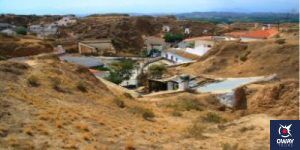