All the information about the Roman Theatre of Cadiz | OWAY Tours

In Andalusia, the cradle of great artists, art is one of the most illustrious aspects. This is one of the reasons why, since time immemorial, there has been evidence of places in the city of Cadiz destined for the performance of plays.

The Roman Theatre of Cadiz was built around 70 BC when Lucius Cornelius Balbo, a friend and adviser to Julius Caesar, decided with his nephew Balbo to extend the urban perimeter of Gades. This is why it is also known as Theatrum Balbi (Balbo Theatre). In this new neighbourhood an amphitheatre and a theatre were built, the latter being discovered in 1980 under the current El Pópulo district.

The building was abandoned at the end of the 3rd century AD and was looted from the following century onwards, although until medieval times the remains of its powerful structure were used as warehouses, stables and dwellings. Another of its functions was to serve as a base for the Islamic fortress, mentioned in sources of the time as the “Castle of the Theatre”, and later reconstructed by Alfonso X “the Wise” after the conquest of the city.

The excavations carried out have brought to light part of the theatre, which can be considered the oldest and one of the largest in the Iberian Peninsula. Its structure has very archaic features, with a horseshoe-shaped cavea and parabolic-shaped stands. Under them runs the wide distribution gallery, covered by a barrel vault.

The cavea was built on a slope in the ground and the natural rock had to be cut away to build the gallery, while the outer wall was built of perfectly worked ashlars and the openings to the stands were opened. The most monumental area of the complex, the scene and the portico that opened behind it, has not been excavated and its ruins remain hidden under the El Pópulo district.

Today, it is particularly noteworthy that there are buildings that are superimposed on the Theatre, such as the Municipal Nursery, the Inn of the Inn, the House of Estopiñán and the Accounting House, buildings that form part of the El Pópulo district, which still preserve in its streets the layout of the old medieval quarter, the walls and three of its doors. 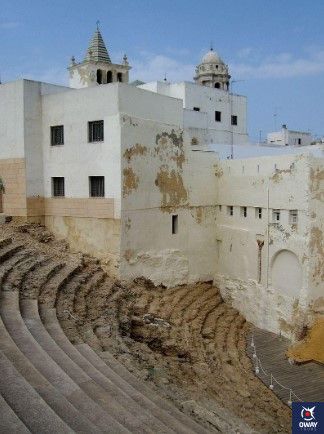 Visiting hours of the Roman Theatre of Cádiz

It is also worth noting that the theatre is closed *ON THE FIRST MONDAY OF EACH MONTH, 24th and 31st December, 6th January and public holidays that coincide from Monday to Friday.

Admission to the theatre is free. However, if you would like to take a guided tour for groups, you must book in advance by calling 677 982 945.

Visitors will not be allowed access to the site within 30 minutes before closing time.

How to get to the Roman Theatre

The theatre is located in Calle Mesón, 11-13. There are several ways to access it. The most common are:

The closest stops to the Teatro Romano De Cádiz are:

The Roman Theatre of Cadiz has certain characteristics, which differentiate it from other Roman theatres found to date. Some of them are: