▷All the Information about the Jewish Quarter of Cordoba | OWAY TOURS

The Jewish Quarter of Cordoba

Cordoba is full of monuments and places to see and things to do. You can enjoy unique monuments, squares, narrow streets, Roman remains, festivals and an exquisite cuisine and good atmosphere.

Cordoba is one of the 15 cities declared a World Heritage Site and is formed by its great attraction which is the Mosque-Cathedral and one of its most famous old neighborhoods, the Jewish Quarter.

History of the Jewish Quarter of Cordoba

La Judería is a Jewish quarter located in the historic center of the city that is part of the area declared a World Heritage Site by UNESCO in 1994.

In this neighborhood we can find an urbanistic floor, which is the typical Islamic layout with two central cross streets and a maze of small roads that are often dead ends.

This neighborhood is limited by the Puerta de Almodovar to the famous Mosque-Cathedral and the current Episcopal see. The Jewish quarter was separated from the rest of the city by a walled enclosure that isolated all its inhabitants and protected them from the wrath of the Christians.

Formerly one of the gates of this enclosure was that of Malburguete, which is located opposite the Mosque, but it is true that all the Jews lived in this neighborhood, although later many of them settled in areas near the enclosure.

A few years ago, the Network of Spanish Jewish Quarters created an element of pedestrian signage common to all cities belonging to this network and with the aim that tourists can recognize it in their views and be identifiable. 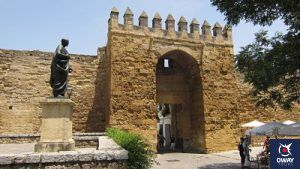 What to see in the Jewish Quarter of Cordoba?

One of the main entrances to start visiting the Jewish Quarter is located around the Puerta de Almodovar. This gate surprises any visitor.

With the arrival of the Muslims, the Jewish population began to have more power, since the most important buildings of the city were in the Jewish quarter.

The Almódovar Gate has an important value in the city since it has a great legacy.

The Almodóvar gate was built with ashlar masonry based on pieces of sandstone, although more materials have been added due to the restorations.

The central opening where one enters the interior of the walled area, is built by two prismatic towers that are joined together as a bridge by an arch. The arch is framed by a simple alfiz, with little decoration. The building is crowned by a row of pyramidal battlements.

Next to the door, you can find a bronze sculpture dedicated to the Cordovan philosopher Lucius Annaeus Seneca. In this sculpture Seneca is represented standing and holding a scroll in his hand.

In the last restoration it has been possible to recover an old path of round of the wall. This path is higher than the rest of the street and allows you to walk along it or sit and watch the water flowing down one of the pools of the pond. 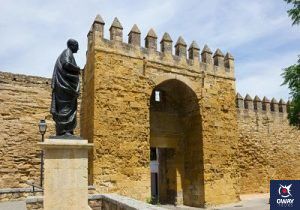 This place has gone through several names throughout history in which it was called Plaza de los Armentas in honor of the family that resided there or the Plaza del Arcediano in which we will currently find the headquarters of the Bullfighting Museum. The name of this square is due to the Arab philosopher Maimonides, who was born and lived in Cordoba in the twelfth century.

The square is located between the streets judíos, Tomás Conde and Cardenal Salazar, all located in the Judería neighborhood. This square, located in the heart of the Jewish Quarter, is a must for visitors coming to Cordoba.

Streets of the Jewish Quarter

The streets of the Judería are impressive. You can enjoy its winding and narrow streets, many of them are dead ends and are also proof of the way in which cities developed during medieval times.

Before leaving the Jewish Quarter, you cannot miss the Plaza and the Calleja de las Flores, as it is one of the most beautiful in the world and in which you will enjoy the decoration on both sides of the street and which have windows and balconies overflowing with flowers. 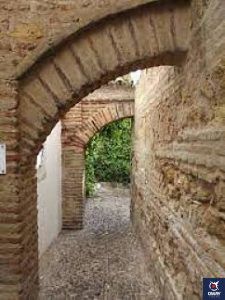 Street of the Flowers

This alley is in the heart of the Jewish quarter and near the Mosque of Cordoba. It is undoubtedly one of the most famous and attractive streets of the city, since for tourists it is one of the favorite corners of this city for its peculiar decoration and its views.

From one of the impressive ends of this street you can see the white buildings with their flowers and in the background the bell tower of the Mosque-Cathedral creating a unique environment and never seen before.

This alley is one of the most visited areas of the Jewish quarter by tourists and generates a pleasant atmosphere when walking through this narrow and winding street, which leads to a small square. 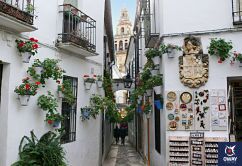 The souk is the perfect place to buy something typical of the city, you can find different stores or typical stores where you can buy the typical crafts of Cordoba.

This place is one of the most visited courtyards in Cordoba since it is open to the public. Not only that, but this place abounds with an important tradition thanks to its intensive care of decoration and the various workshops of local craftsmen working with ceramics or leather.

In the souk you can not only find local artisan products, but you can also enjoy the elaboration of the same, since the artisans are exposed to the public.

One of the curiosities of this market is that it was one of the first Craft Markets created in Spain and also, this historic site has been declared a Site of Cultural Interest, so you cannot miss it. 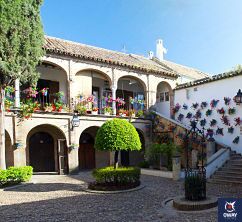 This synagogue stands out for being unique in Andalusia and for being the third of the best preserved of the medieval period. At the end of the 19th century, it was declared a National Monument.

The architecture of this synagogue stands out for its strong influence of Islamic art, and its walls are full of inscriptions in Hebrew.

In this synagogue you can discover a lot of history. This has gone through several stages in which it was a temple, then a hospital, then a hermitage and finally a nursery school, thanks to this discovered its value.

Next to the synagogue of Cordoba we can observe the House of Sepharad. One of the curiosities of this place, is that to access the building you must cross a small courtyard where formerly was a pond for the ablutions of hands and feet. 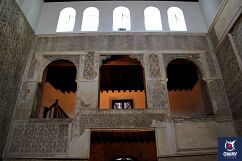 The Andalusí house is one of the traditional houses of the old days. It has all the characteristics of the houses of the Jewish quarter and is formed by the typical Cordovan inner courtyard and surrounded by beautiful vegetation.

In this house you can also enjoy a permanent exhibition on the manufacture of paper in the Caliphate Cordoba and the collection of ancient coins. In addition, you can observe the mix between East and West and take a trip into the historical memory.

The Andalusian house, you will learn about the lifestyle and housing model of Al-Andalus, which will be a unique experience in every way, and a different way of understanding life. 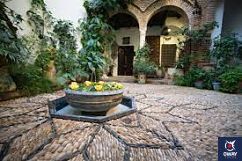 This alley stands out for its width since its width measures the same as an extended handkerchief. This width is of Moorish style.

It is very close to the Cathedral Mosque and is one of the places where the tourist cannot get lost.

One of the highlights of this street is that at the end of this, opens a small square of small size, which is considered one of the smallest squares in the world. It is decorated by a small fountain and an orange tree.

This space envelops the tourist in a unique place as the murmur of water and the scent of orange blossom make it an intimate place for tourists. 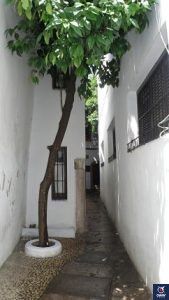 How to get to the Jewish quarter of Cordoba

If you want to walk from the bus station, you only must walk for 18 minutes along the avenue of the Mozarabs, in which we can enjoy the air of Cordoba and also discover on the way corners of the city. You will be able to see the famous Paseo de la Victoria or the impressive Puerta de Almodovar where you will be amazed.

If you are in the Mezquita, it is a good option to visit the Jewish Quarter, which is located just six minutes from the cathedral. From the Mosque, continue along Calle Averroes. The best way to visit the Juderia is to get lost in its impressive narrow streets and you will be totally surprised.

Curiosities about the Jewish quarter of Cordoba

One of the curiosities is that the Jewish quarter is part of the historic center of Cordoba and therefore is declared a World Heritage Site by Unesco. In this area you can get lost in its narrow streets and corners. In addition, this neighborhood is one of the best preserved in Europe with medieval airs.

In the area of the Jewish quarter in some corners we can find a bronze plaque on the floor with a symbol. The purpose of these plaques is to mark the route of the Hebrew legacy of the city and the symbol is the sign of the Spanish Network of Jewish Quarters.

Within the Jewish Quarter we can find the Faculty of Philosophy and Letters of the University of Cordoba with some legends that will surprise you.

It is noteworthy that the street of the Jewish Quarter is full of narrow white houses and cobblestone floors and whose streets are of Islamic layout that reflects the customs and customs of one of the most important Jewish communities of the peninsula.

Finally, another curiosity is that in the Jewish Quarter you can find patios that participate in the Festival of the Patios of Cordoba.