▷All the Information about Maria Luisa Park | OWAY Tours

The María Luisa Park is the most famous garden and the source of fresh air in Seville. Inside you will find wonders worth discovering on a long walk. If you want to get to know the garden in depth and not miss anything, we recommend that you spend a whole day strolling along its paths.

It is an ideal place for a picnic so do not hesitate to pack some lunch and spend an incredible day surrounded by nature and Sevillian culture.

The Parque de María Luisa originated in 1849, when Antonio de Orléans, Duke of Montpensier and his wife, the Infanta María Luisa Fernanda de Borbón acquired the palace of San Telmo and its gardens and made it their residence. They commissioned Lecolant, a French gardener, to design a colossal garden in the style of the building. This gardener designed it in accordance with the English and French fashion, which was in vogue at the time. 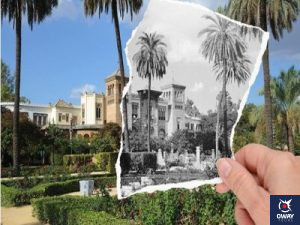 When the duke died, his widow donated practically all these gardens. They were thus neglected until they were renovated for the 1929 Exposition, which gave the Parque María Luisa the majesty it retains today. The French architect Forestier oversaw this. He transformed what were palatial gardens into a beautiful public park with monumental and recreational spaces. Although it has a long history, it was considered public in the spring of 1914, when it became freely accessible for the first time.

Parts of the Park

The park is immense. It has 40 hectares divided into roundabouts, squares, promenades, etc. We will see the most outstanding and most interesting parts for visitors: 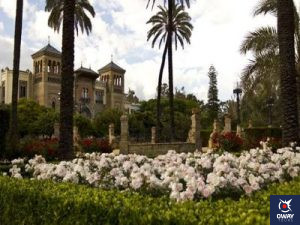 It is considered the most romantic place in the Park. It is a monument dedicated to this poet of Romanticism that represents through the three sculptures of women the love that passed, the one that was possessed and the one that was lost. Behind, the figures of Cupid and a wounded man symbolising painful love. 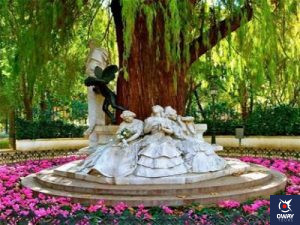 It gets its name from the Melilla massif and represents one of the points with the best views in the Park. For this reason, it is advisable to visit it at sunset. It is a little piece of the Park that is sometimes hidden among nature, but if we follow the sound of the waterfall, we will find it.

This is the oldest fountain in the Park. The eight frogs pointing towards the centre and the duck leaning on the torture is a decorative style that had not been seen before and was influenced by Andalusian courtyards. From then on, the houses of Sevillians were adorned with these figures.

The two benches surrounding the small island in the centre are inlaid with portraits of the brothers and their works. The Álvarez Quintero brothers were playwrights and poets from Seville and the city could not help but pay homage to them.

This square contains the three buildings that Aníbal González built for the Ibero-American Exposition of 1929. It is one of the most touristic places in the Park due to its monumental architecture. It is also one of the squares chosen by the little ones who enjoy feeding the pigeons that live there.

Legend has it that it was here that King Alfonso XII declared his love for María de las Mercedes. This place is surrounded by the most exotic birds: peacocks, ducks and swans, etc. 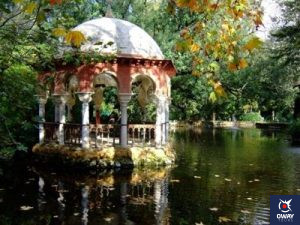 This is Seville’s most visited monument in the history of cinema and one of the favourite places of the Sevillians. Although it is somewhat removed from the Park, it belongs to the park. It is worth strolling over its bridges and observing the tiles of each Spanish province that line the entire interior of the square.

The park is open every day of the year practically all day long, so you can enjoy it at any time.

How to get to María Luisa Park

The park is located right in the centre of Seville, so the best alternative is to use public transport and not worry about parking. 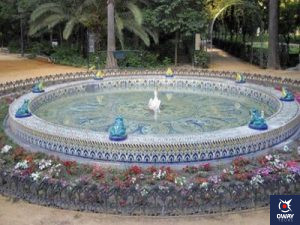 If you prefer to take advantage and do some sport, we recommend you use the bicycles available in the city. You can identify them by the Sevici stations. To get to the Park you can use stations 144, 137, 59, 120, 119.

Did you know that the layout of the park is asymmetrical? This was intentional. The irregular layout is because the architect was inspired by romantic and wild love. 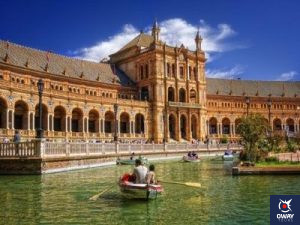 The extension of the María Luisa Park, full of nature, is listed as an Asset of Cultural Interest. Moreover, thanks to the Park, Seville is considered one of the greenest cities in the country, with 22 square metres of green space per inhabitant.

Another of the Park’s curiosities is the zoo it contained at the end of the 1950s. You could see lions, monkeys, flamingos and many other animals as you walked around the area of the Alfonso XII Pavilion. However, in the late 1960s the animals were moved to Jerez and other zoos in the area.

The María Luisa Park is an enclosure dedicated both to the people of Seville and to the illustrious personalities of this city who have contributed to the richness of this culture.