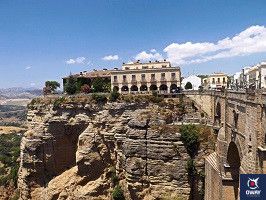 Ronda is one of the oldest cities in Spain and has a lot of history to tell. This city has gone through many different periods, making it rich in culture; all this is due to the fact that Ronda is located in a privileged area that has allowed easy access to all the cultural influences that have passed through it.

Many people have seen this city throughout history and has had many names before it came to the so well-known Ronda of today. It is true that we would not have this unique city today if it had not gone through so many different times throughout its history.

Due to the archaeological discoveries that were made years ago, we can say with certainty that the origins of Ronda go back to the Neolithic. Nevertheless, people were already living in the city before; remains were found in the Genal and Guadiaro Valley and in the Pileta Cave. The latter is one of the best examples of Andalusian Palaeolithic cave art, where you can see paintings on the walls, human remains and utensils.

Ronda as a city originated with the presence of the Celts, calling it Arunda. Later, with the arrival of the Phoenicians, they found another nearby village, which they occupied and named Acinipo, between Málaga and Cádiz. However, the heyday of both cities came a little later: Acinipo in Roman times and Ronda in medieval times. 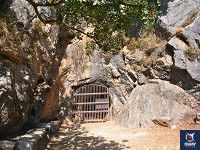 Roman occupation of the Peninsula

The Romans fought on the peninsula and managed to expel the Carthaginians. They began to make social, political, and economic changes throughout the Serranía. They turned Ronda into one of the most important cities of the empire in our territory. There are many remains from this period in the city and its surroundings. However, the archaeological site of Acinipo is the most important, as it has been very well preserved.

Tradition calls the city of Acinipo as “Ronda La Vieja” (Old Ronda) and, after several occupations by Byzantine and Visigoth Greeks, it disappeared. Finally, after the convulsive period of the fall of the Roman Empire, Acinipo disappeared, making all the attention turn to Ronda. From that moment on, even though it was a small town at that time, it became the protagonist of the Serranía and of all the historical events.

It is in this period of time that Ronda consolidates as a city, becoming one of the capitals of the provinces or Kuras that formed Al-Ándalus. All this started in 712 when general Musa Ben Nusayr decided to conquer cities like Medina Sidonia, Seville and our protagonist, Ronda.

They built a new city on the ruins existing at that time and called it Izna-Rand-Onda, capital of Tacoronna or Takurunna. On the other hand, the Serranía de Ronda was inhabited at this time by a great variety of people and cultures: Greeks, Romans, Visigoths, Hebrews, and African tribes. Although this created many disputes, it left a legacy of influences that we can still enjoy today.

During the period of the Nasrid Kingdom of Granada, the city of Ronda had its most significant role in history, as its proximity to the conquered territories led to its establishment and development as a border area of special importance. It then became an area impossible to conquer and very much desired by both the Christians and the Arabs. Furthermore, Ronda was strategically located between the kingdom of Granada and the passage to Morocco.

After the arrival of the Catholic Kings

In 1485, the Catholic Kings conquered the city and changed many economic and cultural aspects, which we can still observe if we visit the city today. However, this takeover of the city brought many consequences. One of the most decisive factors for the conquest was the use of artillery that was placed in certain places of the city and destroyed them: the octagonal tower of the castle, the door of Almocábar, among others. After the Catholic Kings took the city, the people of Ronda suffered without food or water for a week.

When King Fernando the 5th of Aragon arrived on May 24th, he began remodelling the city, building the Iglesia de la Encarnación in the old mosque and the Iglesia del Espíritu Santo where the ochava tower used to be.

The period of time from 1520 was a very complicated one in Spain due to the communal revolts. However, the city of Ronda was kept apart and remained faithful to the King’s mandate. For this reason, the procurator of Ronda at that time, Luis Méndez Sotomayor, said a phrase that would be used on the coat of arms that the Catholic Kings gave to the city: “oh, Ronda, faithful and strong” (“oh, Ronda, fiel y fuerte”).

In 1547, Ronda added to its coat of arms the motto Plus Ultra, which is still used today. This motto was adopted from the imperial coat of arms of Spain at that time, which included the motto Non terrae plus ultra (“There is no land beyond”) and the two columns of Hercules. This motto would later change, as it lost its symbolic value when Christopher Columbus crossed the Atlantic and discovered the West Indies.

From the 18th century onwards

This century marked a before and after in the city. Little by little, the definitive guidelines for Ronda’s role in Andalusia were established. The city began to develop with concern for the future. The different sectors were enriched, and the number of inhabitants increased. In addition, the most important buildings in the city were constructed that we can still visit today and are the biggest tourist attractions in the city: the Puente Nuevo, the Bullring or the Puerta de Felipe the 5th.

In 1909, with the arrival of Alfonso the 13th, the Espinel Theatre was inaugurated. In addition, a new cemetery was built, the Reina Victoria hotel, the Royal, Polo, Gibraltar and the Comercio hotel. In addition, the first savings bank in Andalusia was founded in Ronda, the Caja de Ahorros de Ronda.

Finally, and not less important, the crisis of the 50’s after the Civil War, brought a decline in the population and the economy in the whole Serranía, as the serranos and, of course, the people from Ronda had to migrate to other lands looking for a better life.

However, despite all that happened in and around the city, it has managed to become a unique place and one of the most touristy cities in Andalusia. Moreover, thanks to the increase in trade and tourism, the population has increased again, offering job opportunities to most of its inhabitants.