▷ What to see and do in Carmona? | On OWAY Tour 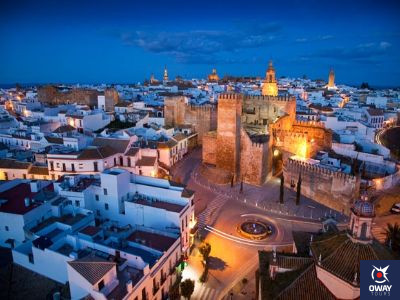 Carmona is a city belonging to the Andalusian capital Seville, only 28 km away. It is located on a high hill at an altitude of 235 metres and is home to a rich historical and artistic heritage that you should know. In Carthaginian, Roman and Muslim times it was of vital importance due to its strategic location in the valley of the Guadalquivir. Its history goes back to the Copper Age and its first concentration of population dates back to the Bronze Age.

What to see in Carmona

Carmona is located in the centre of Western Andalusia, perched at the highest point of Los Alcores, 253m above sea level, so it visually dominates all the surrounding terrain. In Carmona you can follow various historical routes through the neighbourhoods of San Felipe, the Old Jewish Quarter and Arrabal. Its narrow streets are lined with shops selling flamenco dresses, typical pastry shops, with the crumbly bread with which grandmothers used to prepare delicious snacks, and the star sweet, its torta inglesa, a spongy puff pastry filled with angel hair. 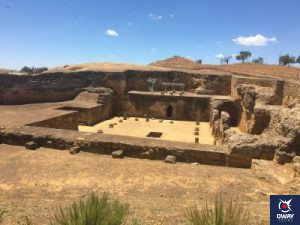 Discovering the archaeological site of Carmona

You can discover the Necropolis dating from the 1st century BC. It is very interesting to know how the burials were according to the social class and the types of tombs that existed.

Some have been converted into a hotel, such as the Casa Palacio de Carmona, a 16th century Renaissance palace where you can see the splendour of the aristocratic families of the municipality.

What to do in Carmona

As this city has witnessed great civilisations such as the Phoenicians, Muslims and Romans, Carmona has great attractions such as numerous monuments, temples and archaeological remains that delight us as we stroll through its white, labyrinthine streets. It is also an ideal place to live due to its magnificent geographical conditions. On the other hand, the city has a fabulous Parador de Turismo located at one end of what was once the Alcázar of King Pedro I the Cruel. 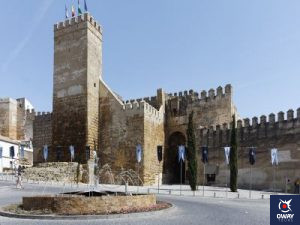 Strolling through its film sets

La casa de Bernarda Alba, Solas, Carmen and Nadie conoce a nadie are some of the films that have been shot in Carmona. Its palaces, churches, convents and cereal fields make it a wonderful place where it is worth losing yourself in its streets.

This is one of the most emblematic monuments in the municipality. This fortress was built on the western side in order to protect the weakest part of the city. We recommend that you climb the Torre del Oro (Gold Tower) for the best views. Here you can also find the tickets for the guided visit to the Alcázar of Seville.

This is a square designed by Ramón del Toro in the neoclassical style of the main squares of Castile, with porticoes and auctions for the merchants’ stalls, although part of its galleries are from the old cloister of the convent. Nowadays there are a variety of bars where you can have tapas and a few beers. Where to eat in Carmona

The gastronomy of Carmona stands out for being a cuisine based on the products of the countryside. The cultivation of vegetables in its extensive fertile plain is the basis of its traditional and popular cuisine, with dishes such as “alboronías”, spinach, ground pepper endive, tomato soup, “esparragados” and many more.

Linked to Lent, there has always been a culinary tradition with numerous dishes and rich desserts. The Arab legacy is also reflected in sweets such as the English cake, and in its confectionery, there is a long convent tradition. 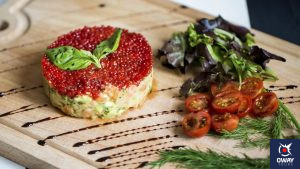 This restaurant, suitable for the most exquisite palates, will offer you a wonderful experience under three precepts based on tradition, avant-garde and fusion. All this with a modern and elegant atmosphere.

The space where the elegant restaurant is located is more than excellent, with high ceilings and large windows overlooking the valley of Carmona. In this magnificent place, where we also recommend you stay, you will enjoy traditional cuisine, with local dishes and succulent seasonal dishes.

How to get to Carmona

If you arrive by car, we recommend parking in the area around the Alcázar, perhaps the most important place to see in Carmona. There is a small car park right next to it. If there are no parking spaces, you can walk down Calle Arco de la Carne and park on the side of the road.

You can also get to Carmona from Seville by bus on the M-124 line.