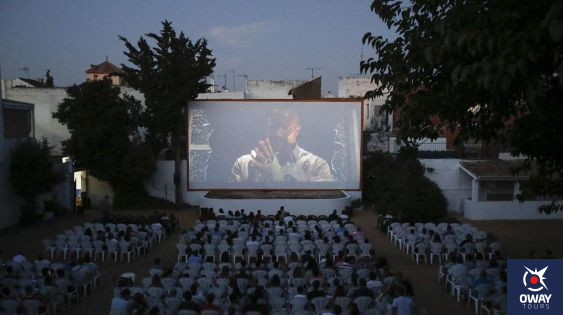 Here is a good option for this summer, if you are going to stay in Cordoba and you are a film lover. You could see the range of summer cinemas that the city offers. In this article you will find all the information about summer cinema in Cordoba, both in the capital and its outskirts.

There is nothing more summery than buying some good popcorn, food, refreshing drinks and sitting outside to watch a film. In Cordoba you can find squares, terraces, cultural centres and even open spaces to watch the film in the car, in true American movie style. There were 54 summer cinemas in the 50’s and 60’s. Four of them are currently located in the historic centre of the city and the others in the bullring. Summer cinemas are usually set up in the open air, in old orchards or on the large terraces of neighbouring houses. The ample space and vegetation of these cinemas provide a little respite for those who decide to watch films on these evenings.

The film listings that can be found in these cinemas are enormous. If one day you don’t like the genre of the film you don’t have to worry. The next day you are sure to find one that you love or that catches your attention. And so on throughout the summer from the 1st of July until September. 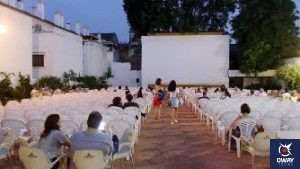 Going back in history and in order to get to know our spaces and customs, you should know that the summer cinema is a phenomenon that came to Cordoba from other cities. The first recorded documentary was in 1923. The cinemas were Ideal Cinema, Cine Parque Recreativo, Cine Victoria and Cine Salón San Lorenzo. It was the inauguration of the Cine Coliseo San Andrés in 1935, followed by Cine Fuenseca (1943) and Cines Delicias (1945) when they became popular here and spread throughout the historic centre of the city in the following decades, being among the oldest in Spain. Cordoba is the Andalusian city with the most summer cinemas in operation since at least 1923.

In the 50’s, 60’s and 70’s, the summer cinema became one of the favourite customs of the Cordobeses. Especially missed by the descendants born during those decades. For this reason, it is one of the most attractive traditions and forms of entertainment to be found in the province of Cordoba. 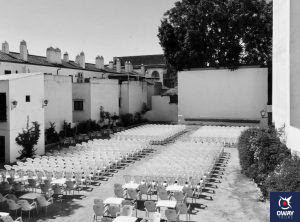 Each of the summer cinemas offers its own bar service with cold drinks, hot sandwiches of pork loin, omelette, chicken breast, hot dogs, hamburgers… Individuals can bring their own food from home, although limits are imposed. The entrepreneurs and workers in charge of these spaces state that it is often not worth stopping to prepare something at home or to buy in nearby establishments as the prices they offer for sandwiches and cold drinks are not higher than those of any bar that provides these services, the prices are quite affordable and it is more convenient to get the food there, making this a summer cinema experience of its own.

Cordoba’s four summer cinemas have a total of approximately 2500 seats. There are daily screenings from summer until mid-September. If the time of the film permits, there are usually two screenings.

The programme is very diverse, because it is designed for different audiences: families, premieres and revivals of the most important films of the season; filmmakers looking for director’s films that have won awards at film festivals. Including film classics and comedy, this type of film is especially attractive for summer audiences.

The night of the film is almost idyllic, surrounded by oranges, lemons and aromatic plants typical of Cordoba, such as the lady of night and jasmine. The natural spices of these plants make the experience of a summer film even more delicious.

There is another outdoor space where you can stroll this summer and soak up culture at the same time. And all this while enjoying its wonderful views, history and landscapes. It is the world-famous monument of Medina Azahara. Book with us now to enjoy this wonderful experience: 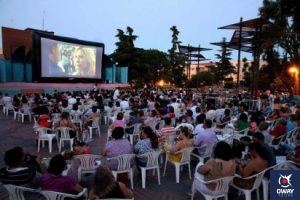 The times when you can visit these activities are from 22:15 to 00:15, with this time being extended depending on the film.

The locations where you can find a summer cinema in the city of Cordoba are the following:

The entrance fee is 3,50 EUR from Monday to Thursday; and 4,00 EUR on Fridays and weekends.´ 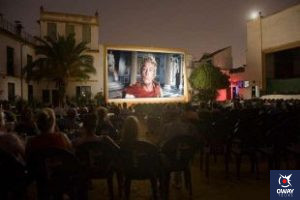 To learn more about Cordoba, other summer plans and all the monuments that the city has to offer, OWAY Tours offers you the best guided tours in Cordoba: