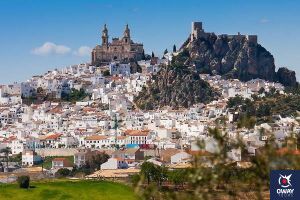 The White Villages are a group of 19 towns spread between the provinces of Cadiz and Malaga. Its name comes from the color of the houses and the custom of covering them with lime to cool the houses in the hottest months. The white color reflects the sun’s rays and prevents them from accumulating on the walls and entering the houses.

In this article we will focus on the 7 most beautiful White Villages, although we recommend that, if you have the opportunity, you visit each and every one of them. In OwayTours we offer you a guided tour of the White Villages.

Arcos de la Frontera is located on a hill overlooking the Guadalate River and is considered one of the most beautiful villages in Spain. Getting lost among its winding, narrow and steep streets is a unique experience. The historic center of the town has extraordinary monuments such as the Castle of the Dukes or the Basilica of Santa Maria, among others. Its Easter Week has been declared of National Tourist Interest and its reservoir has been declared a Natural Site. In addition, it is located a few kilometers away and has a wide range of water sports. 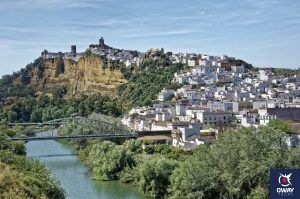 Grazalema is a picturesque village located in the heart of the Sierra de Grazalema. This place has the highest rainfall index of the entire Iberian Peninsula. The dolmen of the Giganta is a trace of the prehistoric past of the town. In its historic center stands out the baroque church of Nuestra Señora de la Aurora, the jewel of the town. In addition, in the hamlet of Benamahona (meaning “sons of Mohammed” in Arabic) the traditional Moors and Christians Festival is celebrated. 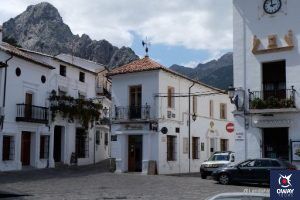 Olvera is located at the foot of an impressive 12th century Moorish castle. The historic center of Olvera is declared a Historic Site and has a fusion of Andalusian heritage, stately facades and popular architecture. Within the walls is the neighborhood of the Villa, where the archpriest church of Nuestra Señora de la Encarnación is located. Outside the walls we can visit the convent of Caño Santos and the sanctuary of Nuestra Señora de los Remedios. This town played a crucial role as a frontier in the Nasrid kingdom.

Setenil de las Bodegas is one of the main tourist destinations within the route of the White Villages, due to its particular architecture that merges the rocks with the houses. This network of buildings makes each street unique. It is worth mentioning the streets of the Cuevas del Sol and the Cuevas de la Sombra. Setenil was an ancient Almohad settlement of medieval origin. Still preserved are the keep and a cistern of its past as a fortress in the fourteenth century. The parish church of Nuestra Señora de la Encarnación and the old Town Hall are a must visit, as well as the hermitages of Nuestra Señora del Carmen and San Sebastián. 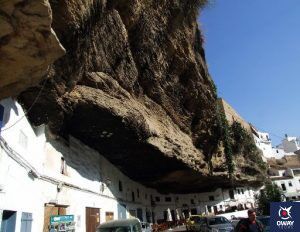 Ubrique is located between the natural parks of Los Alcornocales and Grazalema. Its Roman origin is reflected in its ancient Roman road and the site of Ocuri, a burial columbarium of which there is almost no other like it in the whole peninsula. It also preserves Muslim remains such as the castle of Fatima, dating from the twelfth century. It has hiking trails, places for hunting, fishing or bird watching. Ubrique exports handmade furs that combine tradition and vanguard. Every May they celebrate the “Crujía de gamones“, where they heat some plants with long stems and thick roots (gamones) and then hit them to create the effect of a burst. 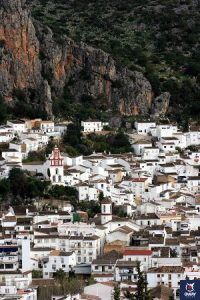 Vejer de la Frontera is located on top of a hill above the Barbate River. Its beautiful Jewish quarter reflects the Arab heritage of the municipality. In the highest part is the castle, which dates from the eleventh century and combines Christian and Muslim elements. The village is completely walled and still preserved several towers and four medieval gates. Only 9 kilometers away is El Palmar, one of the most famous beaches of the Costa de la Luz for surfers. 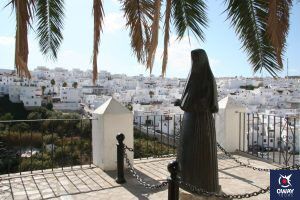 Zahara de la Sierra is located at the foot of the Sierra del Jaral. Being on a hillside, the streets are staggered at different levels. Its most traditional festival is Corpus Christi, where you can taste traditional dishes such as “sopas hervías” or “quemones de cebolla”. This municipality was founded in the Muslim period. The Castle and the Andalusian urban framework are still preserved. Among its historic center we highlight the church of Santa María de la Mesa and the bridge of the Palominos. 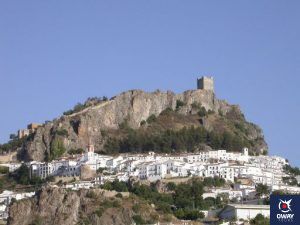