▷ What to see in Arcos de la Frontera | OWAY Tours

The Carmenes of Granada 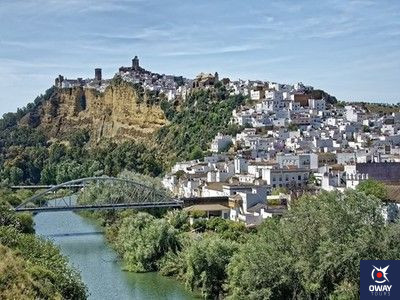 Arcos de la Frontera, the gateway to the White Villages, is one of the jewels of the province of Cadiz. This town is located 67km from the capital, being one of the most visited towns in the province.

Arcos de la Frontera is not only a tourist destination of reference, but also has a rich historical heritage that makes it even more interesting to visit. In this town we find remains of the Muslim era, mixed with the legacy of the Catholic era.

With white houses, endless alleys, viewpoints and monuments of incalculable value, Arcos de la Frontera is undoubtedly one of the best destinations and a town you must visit if you want to soak up the culture and tradition of Andalusia.

This town is located a short distance from Cadiz, the capital, which you can visit with one of our Guided Tours in Cadiz or with our Free Tour in Cadiz.

We bring you here some of the best places to see in Arcos de la Frontera, to make your visit even more special and do not miss the best corners of this charming town.

You can start your tour of the center of Arcos de la Frontera here, as it is the first thing you come across. This slope is one of the most beautiful and special streets of the whole town. In addition, it houses much more and is full of history and monuments that will leave you with your mouth open.

The first thing that catches our attention is the monument to the Holy Week and a little further up awaits us the church of San Juan de Dios. Many do not enter to see this church whose main attraction on its facade is a tile depicting the Christ of the Vera Cruz. However, here is the oldest hospital in Arcos dating from the late fifteenth century. In addition to this, inside it houses a beautiful altarpiece which highlights the figure of Christ of the Vera Cruz of the sixteenth century. 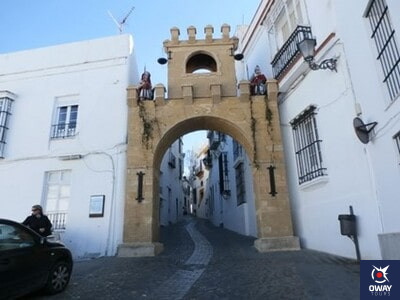 The Cabildo Square of Arcos de la Frontera is located inside its old urban monumental enclosure. Specifically, the square is located in the highest part of the town, right in the heart of its interesting Historical Center.

It can only be accessed through a few very narrow streets full of history and beauty, such as Nueva, Pesas del Reloj and Escribanos streets, as well as through a narrow passage that starts at Deán Espinosa street.

This square may be one of the most important points of Arcos. It is surrounded on three sides by important buildings such as the Basilica of Santa María de la Asunción, the Town Hall, the Ducal Castle and the Parador de Turismo, which was the former home of the Corregidor, while on the fourth side is the Balcón de la Peña Nueva, a viewpoint on a rock cut almost 100 meters high, with incredible views of the meandering Guadalete River and the Jerez countryside. 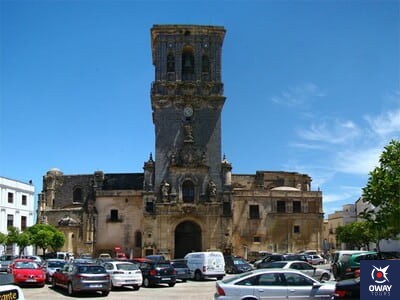 The Church of San Pedro

Very close to the Palacio del Mayorazgo, another interesting building stands out, the Church of San Pedro. In addition to the building, this church stands out because it is perched on a cliff occupying the site of an ancient fortress.

The Church of San Pedro, in Arcos de la Frontera, was built in the 14th century on the remains of an ancient Arab fortress.

This century building stands out for a majestic tower-facade of baroque style influenced by the Sevillian school. However, this is not all, its rectangular interior is, to say the least, spectacular. Its chapels and baroque choir will not leave you indifferent, in addition, as if this were not enough, inside there is a gilded altarpiece detailing the life of St. Peter and paintings attributed to Francisco de Zurbarán.

This is another must-see in this town in the province of Cadiz. 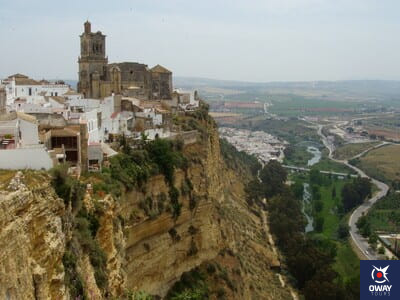 The Alley of the Nuns

Although all the streets, squares and corners of Arcos have something to offer and are worth visiting, this alley has something special.

It is flanked on one side by the back wall of the Basilica of Santa Maria de la Asuncion and on the other side by the facade of the Convent of the Incarnation and several noble palaces.

If already the front of the convent is spectacular and leaves you with your mouth open, another of the special things that offers this alley, for which it is most famous, are the three stone arches that cross it.

These arches correspond to an intervention made on it in 1699 by the Jerez architect Diego Moreno Méndez, in order to give stability to the basilica. Without knowing it, this made this corner of Arcos one of the best known and most visited.

Although it may seem simple, this corner is one of the most beautiful and special of this town, so do not miss it. 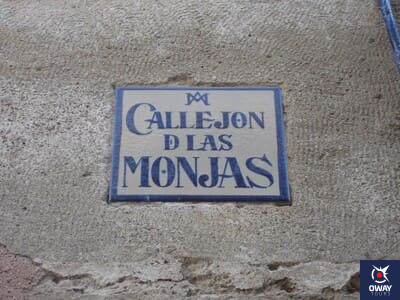 We have already mentioned above some viewpoints and, because of its location, Arcos de la Frontera is full of viewpoints, each one more special and spectacular.

We are going to talk about two of the most famous and, undoubtedly, with some of the best views, are that of Abades and Peña Vieja. The first one is a wide and well kept balcony with flower pots on both sides, from which you will have fantastic views of the lower part of the village, the Guadalete river and the natural parks Sierra de Grazalema and Los Alcornocales.

The second, Peña Vieja, offers a breathtaking view of the white houses located on the edge of a hill almost 100 meters high, with the meander of the Guadalete river at his feet.

There are many more viewpoints, each one more spectacular, in case the historic center of this town is not enough. 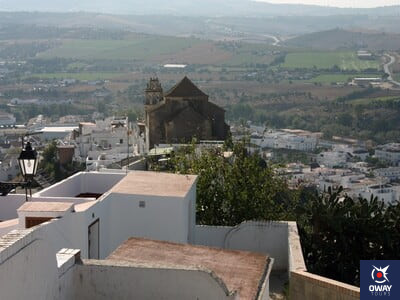 Leaving the Plaza Cabildo you can walk along Escribanos street until you reach the Plaza de la Botica, another of the most beautiful places in Arcos de la Frontera.

It is a small square, with a special charm, which is a little hidden, but it is worth it. Typical Andalusian style, full of flowers, light and color, with a stone floor and surrounded by white houses, is one of the most special places where you can stop.

This square, in addition to its unique charm, is surrounded by locals with terraces where you can have a drink while enjoying the atmosphere and the views of the square. You can try some of the typical dishes of the area and, in addition, as the square is presided over by the Convent of the Mercedarias Descalzas, the only cloistered convent left in the village, you can also try their famous homemade sweets. Do not miss them, because they are delicious. 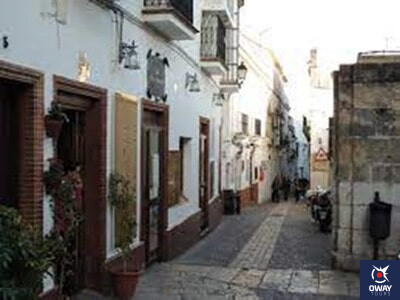 Erected in the XIV or XV centuries in Mudejar style, the temple has undergone several centuries of major reforms that have made it a church with a Gothic interior, which houses a magnificent altarpiece of 1585, while on the outside there is a mixture of Renaissance and Baroque elements, highlighting its cover of Plateresque Gothic style and the bell tower of neoclassical style.

There are few words to describe this monument, which tells the history of the town and the whole area by itself. This is, without a doubt, one of the most essential places in Arcos. 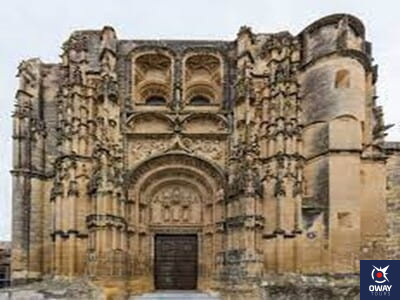 You may think that we are getting confused and that there is no beach in Arcos, but this is not so. This beach is obviously artificial. However, it has nothing to envy to the natural ones. Located in the reservoir of Arcos is one of the best stops on hot summer days.

It is not far from the village, so, when you finish seeing it, you can stop by later. You can take a walk, breathe some fresh air, maybe have a picnic, a perfect plan if you want to get away from the heat and the hustle and bustle of the village. In addition to this, you can also practice some water sports or typical beach activities.

The views of all the surroundings and the town itself are beautiful and the atmosphere allows you to spend a quiet day, enjoying the sun and the water. A perfect plan to rest and refresh yourself in an incredible environment. 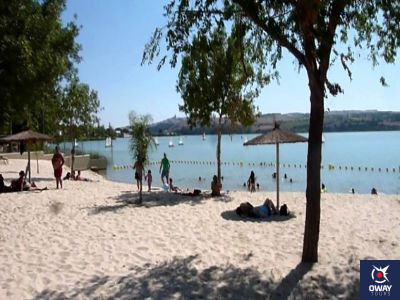