The best hiking routes in Malaga

Surrounded by sea and mountains, Malaga is one of the richest provinces in footpath, offering the best plan for nature lovers. A snow deposit, a natural sculpture gallery, a walk along the route of the European romantics of the 19th century, vultures and mountain goats, cave paintings, and many other wonders we offer you in this guide of the best hiking routes in the province of Malaga.

This route begins in the recreational core of the Alcazar, in these facilities there is a recreational area with a camping and parking area. It ends in La Maroma, this peak is named for its natural well from which the snow was extracted.

It has 3 obligatory stops, that of the Cerro del Tacón with the views of the Axarquía region and the Viñuela reservoir; the Loma de la Víbora with the Zafarraya plain and its frequent fog; and Fuente Santa, where we find the only place with the possibility of having water during most of the year and the species of midwife toad, endemic to this mountain range.

In Sierra de Tejeda, Almijara and Alhama Natural Park we find one of the main focus of the mountain goat. Their hunting put them on the verge of extinction, and for this reason the area was declared a national hunting reserve in 1973. During the walk we can see all over the park the passage of the mountain goats, although especially in the areas that this path crosses.

Torrecilla is one of the highest peaks (1,919 metres) in the province of Málaga, which is is one of the most classic routes. It begins in Cañada del Cuerno, one of the most beautiful areas of Sierra de las Nieves, and brings together old Spanish firs that form a rich plant life with moss-covered soils. The summit of the route at the highest point of Malaga allows us to enjoy the landscape of much of Malaga, and part of the provinces of Cadiz and Seville, and the summit of the mountains of Granada to the west.

In Puerto de los Pilones we can see the views of Torrecilla and Cerro Alcazaba in the foreground and the Mediterranean coast in the background. This path is of anthropological interest, since different rural constructions stand out, among which are the snow wells, which used to take advantage of the snow resource for its use during the year. The rest can be found in the Pilar de Tolox, an old fountain with large carved stone blocks. It is one of the few water points in the upper area, essential for livestock and birds. This is a reproduction point for the salamander.  From here the climb to the top of Torrecilla begins. 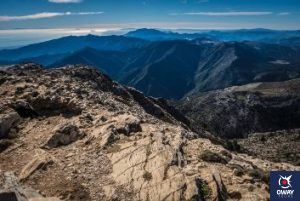 In the municipality of Antequera we find the route through the Natural Park El Torcal. This is characterised by its impressive landscapes where the limestone rocks are folded horizontally generating flanks that sometimes present a network of caves, chasms, dolines, alleys and a whole sculptural repertoire, the result of the dissolution of the limestone.

This path consists of an extension of the green route that passes through points of interest such as the Hoyo de las Ventanillas and the Torcal Alto. Near the start we can find the figures known as the Sphinx, or La Jarra a little further on. A second stop shows us the rock known as El Camello and El Adelantado. These are examples of how the erosion of wind, ice and water has carved capricious shapes into the limestone rock. It is also very common to see mountain goats and vultures, as the birds have a privileged environment here. 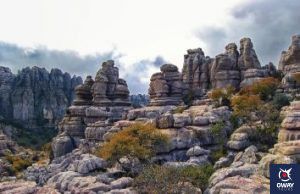 In the Natural Park of Sierra de Grazalema we find a path that runs parallel to the Guadiaro River, joining the stations of Benaoján and Jimera de Líbar. This route can be done on foot or by train, since the railway has been adapted to its winding path drawn by the water.

It starts from the Barriada de la Estación de Benaoján, a small town developed from the train stop and the famous sausage industry. Witnesses of the past can be found in the old tabern María Joaquina or the ruins of the pig warehouses and feedlots. It is curious the sale for its services of accommodation and food to the legendary European romantic travelers of the nineteenth century. We can make a stop at the remains of the old bridge of Arab origin, which we observe on the river bank. Another important landmark is the limestone peaks of the Alto del Conio (or Unicorn) which rises to over 1,200 metres. We also find the famous Cueva de la Pileta, declared a historic-artistic monument since 1924 for the most important Palaeolithic cave paintings in the Mediterranean area.

This walk through the Los Reales de Sierra Bermeja Natural Park takes us through one of the most privileged areas in the world, one of the last pinsapos on peridotite. The pinsapo is one of the botanical jewels of Sierra Bermeja, trees more than 10 million years old that have witnessed many events in the Mediterranean basin.

The circular route is the result of joining part of the footpath the Paseo de los Pinsapos (Estepona) and the footpath the Los Realillos (Genaguacil) that goes up to the top of Pico Reales, at 1,450 metres above sea level. The start of the route along the Paseo de los Pinsapos is not in the Puerto de Peñas Blancas, some 12 kilometres from Estepona. One of the main stops is the Mirador de Salvador Guerrero, where we can enjoy an impressive panorama. We can also do it after the descent of the Arroyo de los Pinsapos, in a place known as “La Plazuela” where we find a ceramic mural with the poem dedicated to these plant species of the poem by Federico Garcia Lorca. 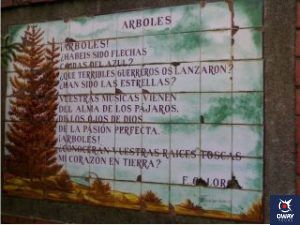