The 12 must-see places in Cadiz 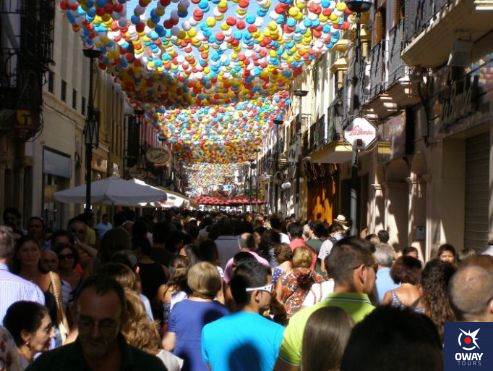 Information about the Ronda Fair

Ronda in September is synonymous with fiesta, attracting anyone in the province of Malaga or even tourists from all over Spain. The streets of the city are decorated for the special occasion, and are filled with fun, dancing and singing at all hours of the day.

Its main attraction is the Corrida Goyesca, where the Plaza de la Real Maestranza de Caballería de Ronda, one of the most famous, beautiful and oldest bullrings in all of Spain, serves as the stage. This is where the most famous figures of the moment in culture, politics and, of course, bullfighting meet. 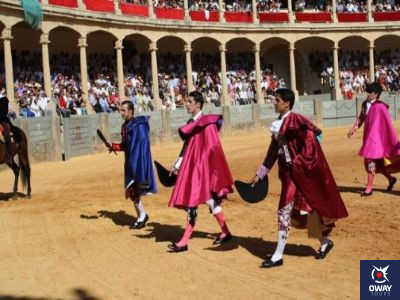 Timetables and Dates of the Ronda Fair

The Feria always starts on the first Saturday after the 2nd of September. That is to say, in 2021 it would start on the 4th, in 2022 on the 3rd and in 2023 on the 9th. During one week different events take place such as the famous Corrida Goyesca, the Festival de Cante Grande, which is the oldest flamenco festival in the province of Malaga and where great figures of the national flamenco have passed through; the International Folkloric Gala, which is the oldest folkloric festival in Andalusia and the second oldest in Spain and every year groups from different countries attend; furthermore, to close the fair, the Concurso Exhibición de Enganches is held, an opportunity to get to know the different types of carriages.

Apart from the various marked events, the fair takes place throughout the day, with no fixed timetable. During the hours of sunshine the fair takes place in the streets of the city centre, always full of people and joy. At night, the fair moves to the Recinto Ferial, where there are different stalls for all tastes and atmospheres, where you can continue to enjoy yourself until you can’t stand it.

For the little ones there are attractions in the Real de la Feria where they can enjoy a good candyfloss and a multitude of fast food stalls. 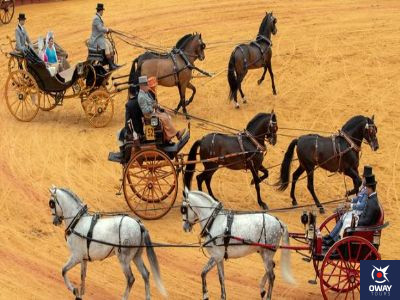 How to get to the Ronda Fair

If you are coming by car from Malaga, you have to go towards Ardales on the A-357 and once there take the turn-off to the A-367, which is signposted at all times in the direction of Ronda.

To get there by bus, there are different routes and companies that vary depending on where you are coming from. The main lines with intercity buses are: CTSA-Portillo, Los Amarillos, Autocares Sierra de las Nieves and Autocares Lara.  For more information, ask at your local bus station.

If, on the other hand, you choose to come by train, and you are in Malaga, you can catch a train from María Zambrano station which will take you to Ronda in less than 2 hours.

Festivals and Events of the Ronda Fair

The Ronda Fair actually starts earlier with the election and presentation of the Damas Goyescas, a very typical act of the city. To be a dama is an honour for any Ronda girl, who besides being dama and queen of the city’s festivities, wears the typical goyesca costume. 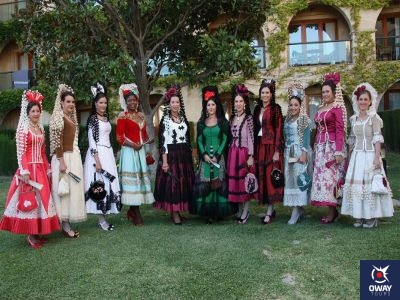 The famous Corrida Goyesca is held on the Saturday of the fair, in the Plaza de la Real Maestranza de Caballería in Ronda. This event has been held since 1954, on the occasion of the bicentenary of the birth of the Ronda bullfighter Pedro Romero. 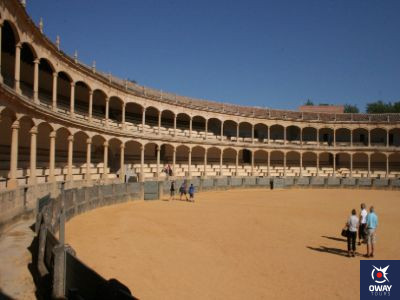 The curious Concurso Exhibicion de Enganches consists of vintage carriages, unique in the world, which have been restored for exhibition in the competition. A jury evaluates the horses, which are usually Pura Raza Española, the coachmen or the quality among others.

The Ronda day fair takes place every day of the fair week. It takes place in the streets of the city centre, which are full of joy with their festive decorations and people singing and dancing while having a drink.

At night, the fair moves to the Recinto Ferial, where between attractions and stalls, the fun is guaranteed. There is something for all tastes and ages. What’s more, if you hold out until dawn you can have some delicious churros with chocolate at one of the stalls at the fair.

If you have time during your visit to Ronda, don’t forget to book our Free Tour Ronda or the Monumental Guided Tour Ronda, to discover the city in depth.