Granada, a province that reaches the sky from the steep peaks of the Sierra Nevada, that offers pure monumental art, music and poetry, a place where the days will be short, and where there are countless places to visit. In Granada, you will be amazed.

But we already know that visiting the Alhambra will undoubtedly be the main reason that will lead you to travel to Granada, but our visit to the city should not be centred here, as Granada has many more beautiful places to offer.

In fact those places, such as the Corral del Carbón, are the ones that will not leave you indifferent as they are full of history, beauty, and they are not so crowded.

Discover all the information about this little piece of the 14th century, an old Andalusian alhóndiga from 1336, a reflection of the history of Granada and the Arab legacy that remains latent in the city.

History of the Corral del Carbón of Granada

The Corral del Carbón, known in Arabic as al-fundaq al-yadida, i.e. Alhóndiga Nueva, was built in the first half of the 14th century and was used as a warehouse and sales point for wheat, as well as housing for the merchants who brought it to Granada.

After the Reconquest, in 1494, the Catholic Monarchs appointed Juan de Arana as his lieutenant, ceding the property to him in 1500. On his death, with no heirs, in 1531, the alhóndiga was sold at public auction, and the Christians adapted it for theatrical performances and a playhouse.

You should know that this is the only Arab alhóndiga still standing in the Iberian Peninsula. It is located right in the centre of the city and has been preserved practically in its entirety thanks to the reforms carried out in recent years. 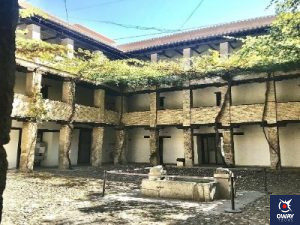 What to see in the Corral del Carbón in Granada?

The three-storey structure is made up of stone pillars and wooden beams and footings, the latter of which are carved. The alhóndigas had large warehouses for storing goods such as grain or wheat on the ground floor of the building, and rooms for housing merchants on the upper floors.

During your visit to the Corral del Carbón you will be able to appreciate the monumental doorway, which is framed by brick pillars and richly decorated with plasterwork. It is also presided over by a large arch with two centres and an alfiz.

After the entrance hall, covered with a muqarnas vault that preserves some remains of its polychromy, you can enter the quadrangular courtyard, which is functional and not overly decorative. In the centre of the courtyard is a stone basin with two spouts.

It is also worth noting that the place sometimes hosts exhibitions which you can enjoy. 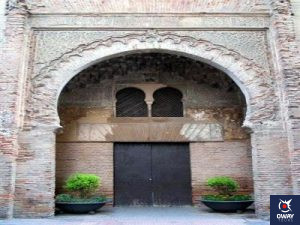 Opening hours from May 1st to September 14th will be from 9:00 to 14:30 in the morning and during the afternoon from 17:00 to 20:30. The timetable will be split due to the high summer temperatures in Granada, so the best time to visit would be during the early morning or late afternoon.

The rest of the days the normal opening hours will be from 9:00 am to 8:00 pm. It can also be visited from Monday to Sunday, so the timetable will not be an inconvenience.

As mentioned above, exhibitions can sometimes be held on site. The exhibition hall is open from Monday to Friday from 9:00 am to 3:00 pm.

Admission to the Corral del Carbón is free. The visit includes only the courtyard and a room where there are temporary exhibitions, as the rest of the floors are used for other purposes.

You should also know that through our free guided tour of Granada, you can visit the Corral de Carbon also for free. But without missing any detail about the history of this place, which will be told in a very entertaining and interesting way.

You should also know that logically during Easter and different festivities it will be more crowded. For this place this is not really a problem as the courtyard is open and has enough space to accommodate a large number of people.

How to get to the Corral del Carbon in Granada

The Corral del Carbon is located in the centre of Granada, for this reason it will not be difficult to get to the place as it is very well located, specifically in the street Mariana Pineda, behind the Town Hall, with C.P. 18009.

Nearby, you will find the Cathedral of Granada and the Alcaicería, so you can continue your tour in the vicinity of the Corral.

Curiosities about the Corral del Carbón in Granada 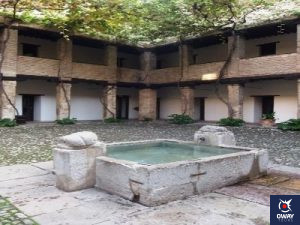