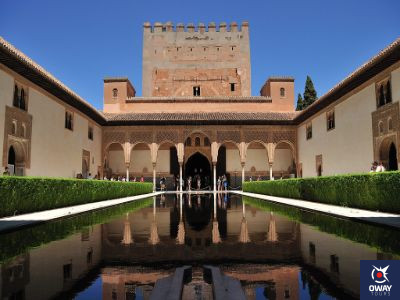 Granada is one of the most beautiful cities in Andalusia. It is a place with a lot of history, as different cultures have passed through it, and each of them left their mark among the monuments and most emblematic sites of the Nasrid city.

That is why we recommend you to visit it and discover its most historic corners.

You won’t regret it!

If you are going to visit Granada, you cannot leave without visiting the Alhambra, the best known and most important monument in the city. It was declared a World Heritage Site by UNESCO and every year it is visited by millions of tourists from all over the world.

The Alhambra is located on top of a hill, which allows visitors to see the Albaicín and Sacromonte neighbourhoods, as well as the rest of the city. Amongst its parts, we can find palaces, gardens, a church, a fortress, etc.

This monument creates in its tourists all kinds of feelings due to the great millenary history that it hides. It is characterised by a combination of several cultures: Islamic, Christian and gypsy.

Make sure you book your ticket in advance, as it is such a busy place that tickets tend to sell out quickly. Also, for reasons of capacity and security, it is ideal to make a reservation so you don’t have to wait in queues or waste time.

Entering the Cathedral of Granada and the Royal Chapel

The Cathedral of Granada is quite markedly Renaissance in style. Isabella the Catholic ordered its construction at the beginning of the 16th century and chose to locate it where the Great Mosque of Granada used to be.

There are different prices for the entrance to the cathedral, these are:

The museum will be closed on 25 December and 1 January.

And the opening hours are:

Attached to the Cathedral is the Royal Chapel, where the remains of the Catholic Monarchs and those of Juana I and Felipe I are kept. Unlike the Cathedral, this chapel is built in Gothic style.

You can also take advantage of the guided tour of the Cathedral and the Chapel, which explains in detail all its history and the secrets hidden in each element of the decoration. It is an excellent opportunity to learn even more about Granada. 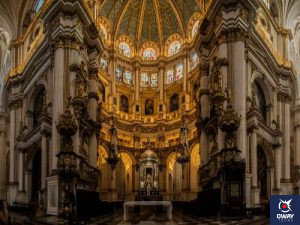 The Madraza of Granada is a building which is little known but has nothing to envy to the Alhambra. It hides a history that is worth knowing.

A madrasa, in the Arab culture that settled in Granada for so long, was a school where the Koran was taught. The children lived and went to school in the same place. In the Madrasa of Granada, 25 pupils lived regularly and constantly, and they had an oratory so that they could pray in it without having to go out into the street.

With the reconquest of the Christians, this madrasa became the city’s town hall, and in turn, the walls of the oratory were covered with wood to convert it into a chapel.

Years later, this place was converted from a town hall into a commercial place, which was burnt down in a fire and the surrounding wooden slats were burnt down as well, which led them to discover that the madrasa’s oratory was still practically intact.

We recommend a visit to this interesting place, they offer 15-minute guided tours for €2. 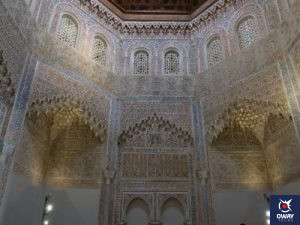 A stroll through the Albaicín and Sacromonte

The Albaicín and Sacromonte are the two most famous neighbourhoods in Granada, so if you visit the city you cannot leave without walking through their streets. It is among these labyrinthine streets that the city of Granada is said to have been founded, which is why it has a special charm.

We recommend that on the day of your visit you don’t go with a set time, as the best way to get to know and enjoy them is to stroll through their nooks and crannies without a fixed itinerary.

Moreover, from its alleys you will be able to see the best views of Granada.

In the Albaicín you can also find the ‘Casa del Cantaor’ which was the residence of the cantaor Enrique Morente, and where you have the option of staying in one of its rooms.

Finally, in this neighbourhood we can visit ‘los cármenes’ which are traditional houses of Granada that have not changed over the years, they still have the essence of the old Granada.

Sacromonte is the traditional gypsy quarter of Granada, where flamenco was born. Here you can see the cave houses, which are houses carved into the mountainside, and which are worth a visit for their history and originality.

Given this information, we also recommend you to take the Albayzín and Sacromonte guided tour, which explains how these two neighbourhoods have evolved and why they are so important for this city. 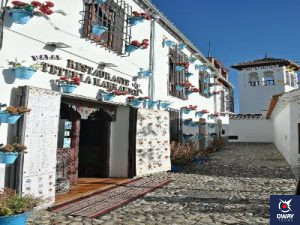 Although visiting monuments is important and essential, you can’t leave Granada without trying its gastronomy. In this city tapas are predominant, and are considered one of its best traditions. Tapear consists of consuming an aperitif along with the drink you order, but this aperitif is free. Depending on the bar you go to, it can be a tapa of your choice or an established one.

Another gastronomic element that you should definitely try are the piononos, the most typical sweet of Granada. You can find them in all the bakeries or pastry shops you come across. We recommend you try them in different places to find out which ones are the best in the place where you are staying.

As a last tip for your visit to Granada, we inform you that the tap water in Granada is drinkable, that is, you can bring your reusable water bottle and refill it at the tap or at one of the fountains that you will find during your visit. In this way, you will avoid buying bottled water, saving your pocket and the environment in general. 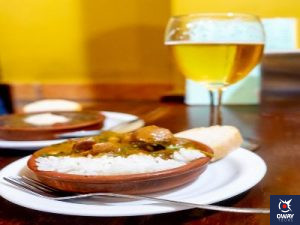 Finally, we also suggest you to take one of the guided tours in Granada or the free tour Granada, in both of them you will be able to know more about the city and enjoy its charm.